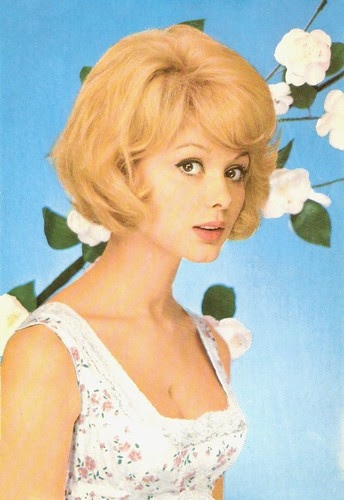 The New Eve
Sophie Daumier was born as Elisabeth Simone Juliette Clemence Hugon in Boulogne-sur-Mer, France in 1934. She was the daughter of composer Georges Hugon, who was also the director of music school of Boulogne-sur-Mer. She trained in classical ballet at the Théâtre de Chatelet, Paris, and at 16 began touring with a Cancan troupe under her own name, Betty Hugon. Blessed with a good singing voice, a vivacious personality, excellent comedic timing and mimicry talent, and a resemblance to Brigitte Bardot, she had a successful cabaret act. She appeared in La Nouvelle Ève (The New Eve), billed as Betty Laurent. She had acting classes by Pierre Dux, Marcel Achard and Raymond Girard, and made her film debut in the comedy Paris canaille/Maid in Paris (1955, Pierre Gaspard-Huit) starring Dany Robin. She was now billed as Betty Daumier, her mother’s maiden name. This debut was followed by such films as Les Collégiennes/The Twilight Girls (1956, André Hunebelle) with Gaby Morlay, La Peau de l'ours/Skin of the Bear (1957, Claude Boissol), and the crime drama Quand la femme s'en mêle/Send a Woman When the Devil Fails (1957, Yves Allégret) starring Edwige Feuillère. She had her first major stage hit in her old teacher Marcel Achard's comedy Patate (Spud) (1957), about a testy, ill-tempered character nicknamed Patate. It played to sold-out theaters in Paris for six (6) years! Urged by Achard to choose a new surname, she picked Sophie for unknown reasons. Sophie Daumier would be her definite stage name. 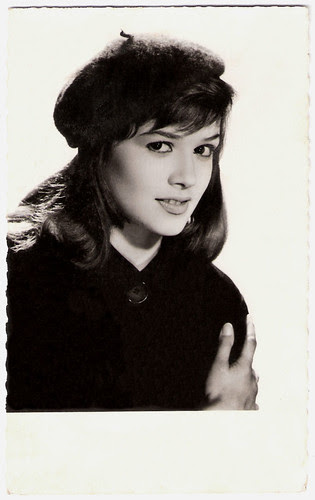 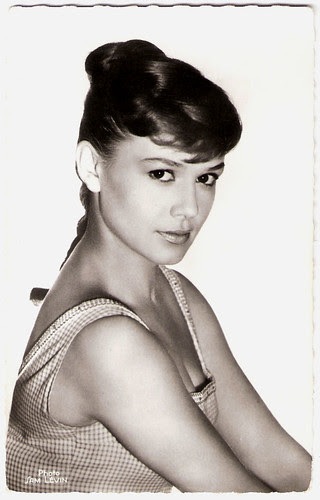 A Dead-ringer for Bardot
In the early 1960’s, Sophie Daumier had an affair with rocker Vince Taylor. Then she met actor and stand-up comedian Guy Bedos on stage in Cyrano de Bergerac and again on the set of the film musical Dragées au poivre/Sweet and Sour (1963, Jacques Baratier). They teamed-up again in the film Aimez-vous les femmes/A Taste for Women (1964, Jean Léon). The couple married in 1965, and through the 1960’s and 1970’s, she often paired with Bedos. Daumier also continued to play supporting roles in such films as the crime comedy Carambolages/Carom Shots (1963, Marcel Bluwal) with Jean-Claude Brialy and Louis de Funès. Films de France reviews: “Carambolages is that rarest of things in French cinema - an effective mix of black comedy and vaudevillian farce garnished in a sour sprinkling of social satire. (...) Some fine supporting contributions from Michel Serrault and Sophie Daumier (a dead-ringer for Bardot) keep the comedy express chugging along nicely, and whilst the film doesn’t come anywhere near to achieving its full comic potential, it is an enjoyable romp - even if most of the gags revolve around people falling from great heights to their deaths or else being blown up with homemade incendiary devices.” Then, she was the leading lady of Jean-Paul Belmondo in the crime drama Par un beau matin d'été/Crime on a Summer Morning (1965, Jacques Deray). Daumier also worked in Italy on Duccio Tessari’s Una voglia da morire/A desire to die (1965) with Raf Vallone, and the Spaghetti-Western Per pochi dollari ancora/Die Now, Pay Later (1966, Giorgio Ferroni) with Giuliano Gemma. 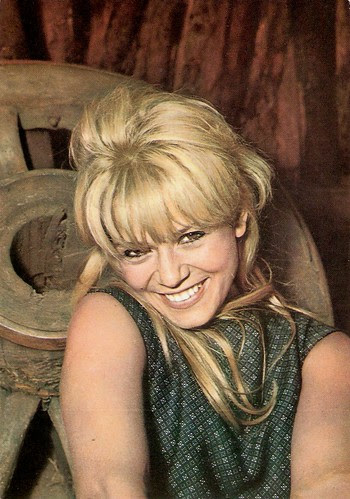 A Compelling and Deeply Moving Piece of Cinema
In the following decade Sophie Daumier was seen in such films as Violette & François (1977, Jacques Rouffio) featuring Isabelle Adjani and Jacques Dutronc, the comedy-drama Comme la lune/As the moon (1977, Joël Séria), and the beautiful Une histoire simple/A Simple Story (1978, Claude Sautet) starring Romy Schneider. The latter was nominated for an Academy Award for Best Foreign Film, and James Travers writes at Films de France: “Sautet’s treatment of the subject makes it a compelling and deeply moving piece of cinema, full of poetry, charged with meaning, so touchingly sincere, so refreshingly unsentimental.” Gradually, there were problems with Daumier, writes Bob Hufford at Find A Grave: “Always a bit ‘zany’, Sophie now became impossible either to work or to live with. Unable or unwilling to take stage direction, she was violent and destructive at home, leading to divorce in 1977.” After her final screen turn in the comedy flop Les Givrés/The Frozen (1979, Alain Jaspard), she published her autobiography Parle à mon cœur, ma tête est malade (Talk to My Heart, My Head is Sick) (1980). Bob Hufford at Find A Grave: “Her head was, indeed, sick; the source of her behaviour, and of her random spastic movements, became clear when she was diagnosed with Huntington's chorea, a hereditary, progressive, and fatal neuromuscular disorder. Stating that he would never have left her had he known the reason for her problems, Bedos, who had remarried in 1978, assumed the financial responsibility of Sophie's care for the remainder of her life as she became semi-vegetative.” Sophie Daumier died from Huntington's disease on New Year's Day 2004 in Paris. She was 69. Her son Philippe later had the same disease as his mother, as had her mother before her. She also had a daughter with Bedos, Mireille (1977).