English actress Hayley Mills (1946) began her acting career as a popular child star and was hailed as a promising newcomer for Tiger Bay (1959), and Pollyanna (1960). During the late 1960’s she played in more mature roles. Although she has not maintained the box office success she experienced as a child actress, she has always continued to make films. 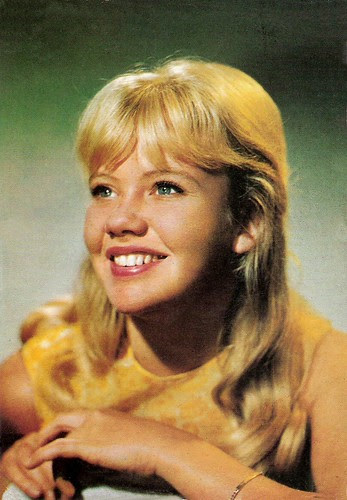 Tomboy
Hayley Catherine Rose Vivien Mills was born in London, England in 1946. She was the daughter of actor Sir John Mills and playwright Mary Hayley Bell, and the younger sister of actress Juliet Mills. As an infant she made her first film appearance in her father’s So Well Remembered (1947, Edward Dmytryk). At 12 she was noticed playing at her parent's home by director J. Lee Thompson. He was looking for a boy to play the lead role of a murder witness in his thriller Tiger Bay (1959) opposite Horst Buchholz and John Mills, but immediately cast Mills’ tomboy daughter. For her role she won the BAFTA Award for Most Promising Newcomer and a Silver Bear at the Berlin Film Festival. Walt Disney's wife, Lillian Disney, saw her performance and suggested that Mills be given the lead role in Pollyanna (1960, David Swift). The role of the orphaned but infectiously optimistic girl who moves in with her crusty aunt Polly (Jane Wyman) made Mills a superstar in the USA. She earned a special Juvenile Oscar and a Golden Globe. Disney subsequently cast Mills as twins Sharon and Susan who reunite their divorced parents (Brian Keith and Maureen O’Hara) in the charming and highly entertaining The Parent Trap (1961, David Swift), based on the classic book by Erich Kästner. In the film, Mills sings the song Let's Get Together, which reached no. 8 on the Billboard Hot 100. The success led to the album Let's Get Together with Hayley Mills, which also included her only other hit song, Johnny Jingo (1962). She made four additional films for Disney in a four-year span, including In Search of the Castaways (1962, Robert Stevenson) with Maurice Chevalier, and Summer Magic (1963, James Neilson). Her final two Disney films, The Moon-Spinners (1964, James Neilson) with silent film legend Pola Negri, and the suspense comedy That Darn Cat! (1965, Robert Stevenson), did well at the box office. During her six-year run at Disney, Mills was arguably the most popular child actress of the era. In addition to her Disney movies, Mills starred in several British films. Opposite Alan Bates she appeared in Whistle Down the Wind (1961, Bryan Forbes), based on the book of the same title written by her mother, Mary Hayley Bell. The Chalk Garden (1964, Ronald Neame) with Deborah Kerr was based on a play by Enid Bagnold, and in The Truth About Spring (1965, Richard Thorpe) her real father, John Mills, was cast as her father. The 16-year-old Mills was considered for the role of Lolita Haze in Stanley Kubrick's film version of Lolita (1962). However, Walt Disney discouraged the casting, feeling the role was not up to Disney's wholesome standard, and the part eventually went to Sue Lyon. In later years, Mills admitted that she regretted not taking the part. 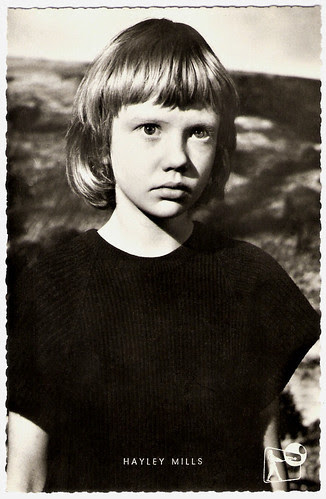 A Brief Nude Scene
After her contract with Disney expired in 1965, Hayley Mills starred in the comedy The Trouble with Angels (1966, Ida Lupino), opposite Rosalind Russell. Looking to break from her sunny, innocent Pollyanna image, Mills returned to England to appear as a mentally challenged teenager in the film Sky West and Crooked (1966, John Mills), which was directed by her father and written by her mother. She made her stage debut in a West End revival of Peter Pan (1966). Shortly thereafter, Mills starred with Hywell Bennett in the comedy The Family Way (1966, Roy Boulting) as a couple of newlyweds having difficulty consummating their marriage. The film, in which she played a brief nude scene, featured a score by Paul McCartney and arrangements by Beatles producer George Martin. She then starred as the protagonist of Pretty Polly (1967, Guy Green), opposite famous Indian film actor Shashi Kapoor in Singapore, and another film for director Roy Boulting, the thriller Twisted Nerve (1968) again opposite Hywell Bennett. While filming The Family Way, the 20-year-old Mills had fallen in love with Boulting, who was 53 and married. After his divorce, he married Mills in 1971. Boulting took control of his young wife’s career, and, as a result, she made bad film choices that left critics and audiences cold, such as the Agatha Christie adaptation Endless Night (1972, Sidney Gilliat) co-starring Britt Ekland and George Sanders. After the even worse drama The Kingfisher Caper (1975, Dirk de Villiers) and the comedy What Changed Charley Farthing? (1976, Sidney Hayers), Mills dropped out of the film industry for a few years and divorced Boulting in 1977. As Tommy Peter at IMDb observes: “her film career had pretty much tanked”. 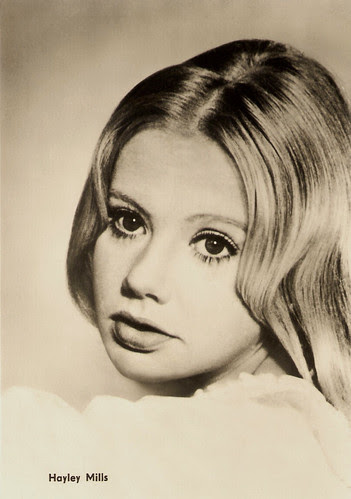 Hare Krishna
In 1981 Hayley Mills made a come-back in a starring role in the TV Mini-series The Flame Trees of Thika (1981, Roy Ward Baker), based on Elspeth Huxley's memoir of her childhood in East Africa. The series was well-received, prompting Mills to accept more acting roles. She returned to the US, and hosted for TV an episode of Disneyland (1981), sparking renewed interest in her Disney work. In 1986 she reprised her roles as twins Sharon and Susan for a trio of Parent Trap television movies: The Parent Trap II (1986, Ronald F. Maxwell), The Parent Trap III (1989, Mollie Miller), and The Parent Trap IV: Hawaiian Honeymoon (1989, Mollie Miller). Mills also starred as the title character in the Disney Channel-produced television series Good Morning, Miss Bliss (1987-1989). The show was cancelled after 14 episodes, and the rights were acquired by NBC, which reformatted Good Morning, Miss Bliss into Saved by the Bell (without Mills). At the time, Hayley Mills was involved with the ‘Hare Krishna’ movement, and wrote the preface to The Hare Krishna Book of Vegetarian Cooking (1984). In 1988 she co-edited, with Marcus Maclaine, the book My God, which consisted of brief letters from celebrities on their beliefs (or lack thereof) regarding God and the life to come. She then concentrated on a stage career and had success as Anna in The King and I, which she played in touring stage productions throughout the 1990's. In 2000 she made her Off Broadway debut in Sir Noël Coward's Suite in Two Keys, for which she won a Theatre World Award. In recognition for her work with The Walt Disney Company, Mills was awarded the prestigious Disney Legends award in 1998. Mills recalled her childhood in the documentary film Sir John Mills' Moving Memories (2000) which was written by her brother Jonathan. Later she appeared in the acclaimed short film, Stricken (2005, Jayce Bartok), the ITV1 African vet drama Wild at Heart (2007-) with her sister Juliet Mills, and in the family adventure Mandie and the Cherokee Treasure (2010, Joy Chapman), based on one of the popular Mandie novels of Lois Gladys Leppard. Most recently she was seen in Foster (2011, Jonathan Newman) with Toni Colette. In 2008, Mills was diagnosed with breast cancer. She had surgery and chemotherapy and told Good Housekeeping Magazine in January 2012 that she had recovered. Hayley Mills currently lives in New York City. Her son, Crispian Mills (1973), is known as the lead singer and guitarist of the psychedelic rock band Kula Shaker, and is now part of The Jeevas. She has a second son, Jason Lawson, from British actor Leigh Lawson, with whom she had a relationship between 1976 and 1984.

Ah the stuff of childhood crushes! I had no idea Ms. Mills was still active in the industry. Very interesting post.

Memories, memories. I didn't realise Hayley Mills was older even than I am. I always felt we "grew up" together. :)

Thanks for stopping by. I've never seen her early work, but the clips and reviews are very promising. There's still so much film history to discover, and like Antonio mails, o write about.