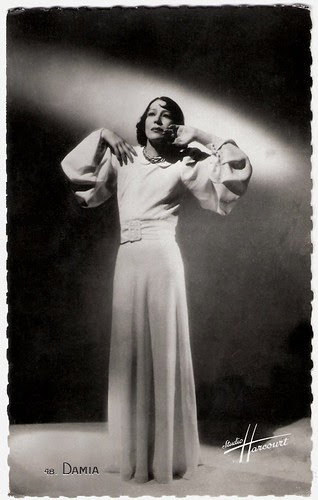 Torchsong
Damia or Maryse Damia was born Marie-Louise Damien in Alsace-Lorraine, France, in 1889. Her father was a policeman. At 15, she run away from home and started to work as an extra at the Théâtre de Châtelet in Paris. Three years later she met the singer/songwriter Robert Hollard who gave her lessons that led to her professional debut. At the time, Hollard was married to the singer Fréhel but the marriage was a difficult one and soon ended. After leaving his wife, Hollard began an affair with his protégé. From 1908 on, she performed in such café-concerts as La Pépinière-Opéra, Le Petit Casino and L'Alhambra. Félix Mayol, one of the leading male singing stars at the time, hired her to perform at his concerts. Despite this, her career evolved slowly, taking second billing for a number of years. American dancer Loie Fuller helped her in her stage presentation, and Sacha Guitry advised her the black sheath and designed her silhouette. Eventually she became a singing star with a realistic style. Later, her style was taken over by singers as Édith Piaf and Juliette Greco. At the beginning of World War I she opened Le Concert Damia, in Montmartre, where she became the first star ever to have a single spotlight trained on her face, bare arms and hands. From this point in her career she became the most important exponent of the chanson réaliste genre until Édith Piaf came along in 1936. Her nickname was ‘la tragédienne de la chanson’, and amongst her big hits were Les goélands, Johnny Palmer, and C'est mon gigolo. Her song Tu ne sais pas aimer later became a torchsong for French sufferers of AIDS. Luc Sante writes at the blog HiLoBrow about her remarkable voice: “The nasality inherent in French was turned by Damia into a principle of style, a kind of mournful continuo she would accentuate with slides and slurs not unlike Billie Holiday in her darkest register. She sang about prostitution and shipwrecks and murderers and drowned sailors and the guillotine. What made her special, though, was the way she could make a rising inflection transcend all the bitterness and sorrow and squalor, as if she could see over the horizon into some better world.” 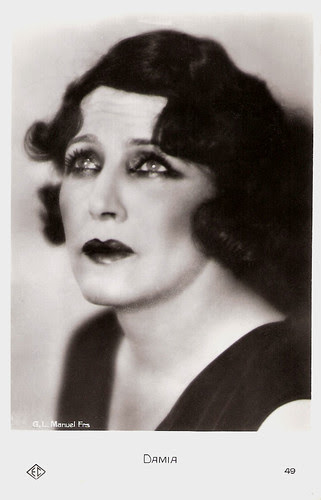 Massive Six-hour Epic
In 1927, Damia made her film debut as the incarnation of La Marseillaise in the classic biopic Napoléon/Napoleon, directed by Abel Gance. This massive six-hour epic about the French Field Marshal's youth and early military career featured Albert Dieudonné and other silent film stars as Antonin Artaud, Gina Manès, and Suzanne Bianchetti. Michael Brooke at IMDb: “The film's legendary reputation is due to the astonishing range of techniques that Gance uses to tell his story, culminating in the final twenty-minute triptych sequence, which alternates widescreen panoramas with complex multiple-image montages projected simultaneously on three screens.” Three years later Damia had her first leading role opposite Colette Darfeuil in the early sound film Tu m'oublieras/You'll forget me (1930, Henri Diamant-Berger). During the 1930’s followed other film successes as Sola (1931, Henri Diamant-Berger) with Henri Rollan, and the Georges Simenon adaptation La tête d'un homme/The head of a man (1933, Julien Duvivier) starring Harry Baur. In 1935 a re-edited sound version of Napoléon was released in the cinemas as Napoléon Bonaparte (1935, Abel Gance). Sound effects had been added, dialogue post-dubbed by the original actors, and new scenes filmed with additional new cast members. Donelan-1 at IMDb: “The lip synch is perfect, because Gance made the actors in the silent version speak their lines (perhaps anticipating the advent of sound). While we can hope that the 1927 version eventually makes it to DVD, the 1934 film stands on its own as one of the greatest historical films ever made.” 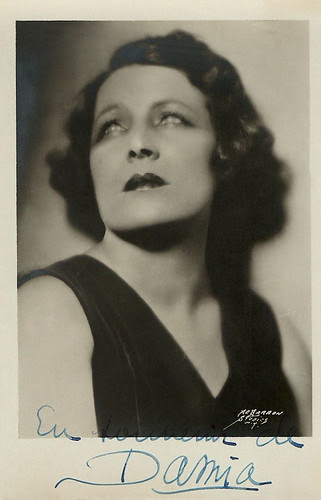 Three packs of Gitanes a day!
Although her popularity diminished after the 1930’s, Damia had enduring appeal that stretched to audiences as far away as Japan where she toured in 1953. A few years later she did a farewell tour, ending her more than forty year career in a double bill with Marie Dubasin in front of a full house at the Paris Olympia. In 1956 she also appeared in two more films. In the romantic drama Goubbiah, mon amour/Kiss of Fire (1956, Robert Darène), she played the mother of Goubbiah (Jean Marais). Her final film role was as a beggar in Notre-Dame de Paris/The Hunchback of Notre Dame (1956, Jean Delannoy), a French-Italian film version of the famous novel by Victor Hugo starring Anthony Quinn and Gina Lollobrigida. Her actual swansong, however, was singing Les Croix on La joie de vivre d'Edith Piaf, in 1956. When asked in 1974 by the Anglo-French biographer David Bret to divulge the secret of her long life and fabulous voice, Damia replied, "Three packs of Gitanes a day!" In 1978 Damia died at La Celle-Saint-Cloud, a western suburb of Paris, as the result of an accidental fall in the subway. She was interred in the Cimetière de Pantin. Today, she is ranked Number Three in the Chanson Réaliste after Édith Piaf and Barbara. Her songs can heard on the soundtracks of films by such modern directors as Aki Kaurismäki in La vie de bohème/The Bohemian Life (1992), Claude Chabrol in La fleur du mal/The Flower of Evil (2003) and Robert Guédiguian in L'armée du crime/Army of Crime (2009).