Handsome French beat singer Ricky Shayne (1944) became a teen idol in Italy and Germany during the 1960’s. He also appeared in several musicals. 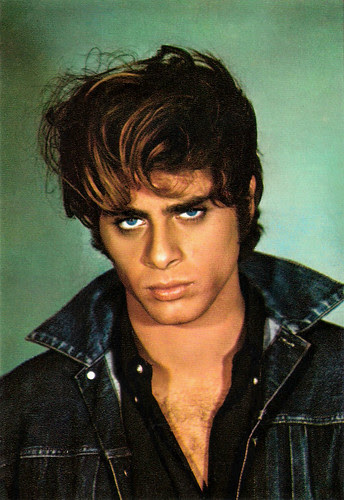 Mods and Rockers
Ricky Shayne was born as George Albert Tabett in Cairo, Egypt in 1944. He was the son of a Canadian-Lebanese oilman and a French painting artist, and grew up in Beirut, Lebanon. As a 15-year-old, he moved with his mother to Paris, where he studied music and singing for two years. Later, Shayne settled in Italy, where he had his first successes as a singer. For the song Stanotte, produced by Franco Migliacci, he even received a golden record. As a singer and actor he performed in Musicarellos (Italian teen musicals) like Altissima pressione/Highest Pressure (1965, Enzo Trapani) with Gianni Morandi, Una ragazza tutta d'oro/A golden girl (1967, Mariano Laurenti) featuring Iva Zanicchi, and I ragazzi di Bandiera Gialla/The guys at Yellow Flag (1967, Mariano Laurenti). In 1965 he had a Top Ten hit with Uno dei Mods (One of the Mods), a song inspired by the British youth culture of the Mods (dressed in the latest styles of the 1960’s) and Rockers (with the ‘greaser’ look of the 1950’s). It lead to the Italian-German musical La battaglia dei Mods/Crazy Baby (1966, Franco Montemurro), about a gang war between the mods and the rockers in Liverpool. Shayne starred as a mod with Joachim Fuchsberger as his father and Elga Andersen as his girlfriend. The film was shot in Italy and in Germany, which offered a new market for the singer. In 1967 Shayne made his first record in the German language for RCA. The song, Ich sprenge alle Ketten (I bust all chains), became a hit and sold 600,000 records. Text and Music were by Giorgio Moroder and Michael Holm, who would have their breakthrough two years later. Also because of his good looks, Shayne became a teenage favorite in Germany. His next songs, like Das hat die Welt noch nicht gesehn (The world has not seen this yet), Es wird ein Bettler zum König (A beggar will be king) and Ich mache keine Komplimente (I don’t make compliments), also reached the charts. 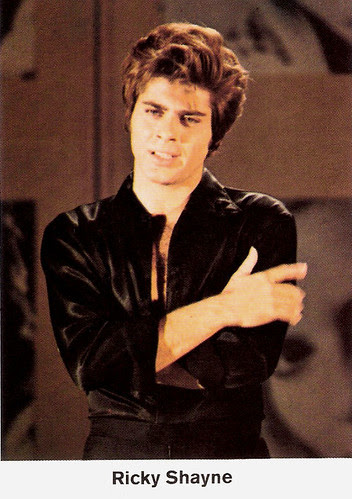 German collectors card in the series Show-Top-Stars by Bergmann-Verlag, Unna.

Mamy Blue
In 1971 followed Ricky Shayne’s biggest hit. He recorded the German version of the hit Mamy Blue by the Pop Tops, and reached no. 1 at the ZDF-Hitparade of the German television. That same year he played the hippie Ricci Sporetti in the film comedy Hurra, wir sind mal wieder Junggesellen!/Hurray we are bachelors again (1971, Harald Philipp) with Georg Thomalla and Teri Tordai. He also appeared in the TV film Olympia - Olympia (1971, Kurt Wilhelm) with Joachim Fuchsberger. Shayne’s next records were no longer hits and he did not appear at the Schlager stages for years. In France, he worked with composer Francis Lai, and sang the title song for the film Le Tueur/Killer (1972, Denys de La Patellière) with Jean Gabin. In 1976 he was a guest star in an episode of the popular Krimi series Derrick. Then he moved to the US to start a new career, but later he occasionally appeared again in various oldies shows on German television. In 1989, he celebrated a modest comeback, as he and Dieter Bohlen recorded the song Once I'm Gonna Stay Forever for the TV-series Rivalen der Rennbahn/Rivals of the Race track. The song was released both as a single and on the soundtrack album for the series. The soundtrack became the most successful album for a German television series ever. Shayne also had a guest role in the TV series Sylter Geschichten/Sylt Stories (1993). For a few years, he managed a kiosk in Düsseldorf, but decided to focus on his music career again. Since then he occasionally appears on TV. As a hobby he draws and paints and in 2010 Shayne had an exhibition in Düsseldorf, titled ‘Ricky Shayne. The Outsider’. Ricky Shayne has been married since the 1980's and has three sons with his French wife.