Jeanne Helbling (1903 - 1985) was an actress of the French cinema of the 1920s and 1930s, who was extremely active in early French sound film. She was also a resistance heroine. 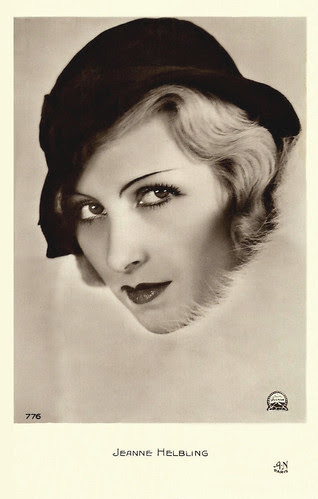 Madame de Pompadour
Johanna Marie Helbling was born in 1903 in the village of Thann in the Alsace, annexed by Germany after the French defeat of the Franco-Prussian war. She came from a family of factory workers and vineyard keepers. In 1920, two years after Alsace had become French again, she became an extra in the film Le grillon du foyer/The cricket of the hearth (1920, Jean Manoussi), starring Charles Boyer, after which a small part followed in Julien Duvivier’s Les roquevillards/The roquevillards (1922). More substantial parts she had in Un bon petit diable/A Good Little Devil (1923, René Leprince) and Survivre/Survive (1923, Edouard Chimot). Then she played Madame de Pompadour in Mandrin (1923, Henri Fescourt), with Romuald Joubé in the title role as the notorious smuggler. In 1924 she acted opposite Pierre Blanchar in L’arriviste/The Thruster (1924, André Hugon). All in all she acted in some 30 silent films, among which also La chaussée des géants/The Giant's Causeway (1926, Robert Boudrioz, Jean Durand) with Armand Tallier, Le juif errant/The Wandering Jew (1926, Luitz-Morat) adapted from Eugène Sue, and Le capitaine Rascasse/Captain Rascasse (1926, Henri Desfontaines) with Gabriel Gabrio in the title role. She also appeared in the avant-garde film La glace à trois faces/The Three-Sided Mirror (1927, Jean Epstein) in which past and present are mingled in an unusual way. Helbling played a naïve working class girl, one of the three women the protagonist meets… and is disappointed with. After this followed roles in the Molière adaptation La jalousie du Barbouillé/The Jealousy of le Barbouillé (1927, Alberto Cavalcanti), and Tire au flanc/The Sad Sack (1928, Jean Renoir) with Michel Simon and Catherine Hessling, Renoir’s then wife. In the late 1920's Helbling went to Berlin to act in Das Geheimnis des Abbé X/ (1927, Julius Brandt, Wilhelm Dieterle). Co-director Dieterle, later known as William Dieterle played the title role himself. Helbling starred in Germany also in Der Held aller Mädchenträume/The hero of all girls dreams (1928, Robert Land) with Harry Liedtke, and in Mascottchen/Mascots (1928, Felix Basch), with Käthe von Nagy. 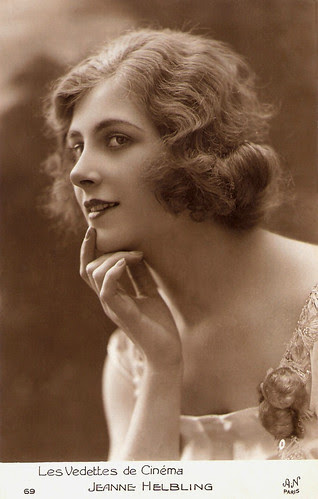 French postcard by A.N., Paris in the series 'Les Vedettes de Cinéma', no. 69. 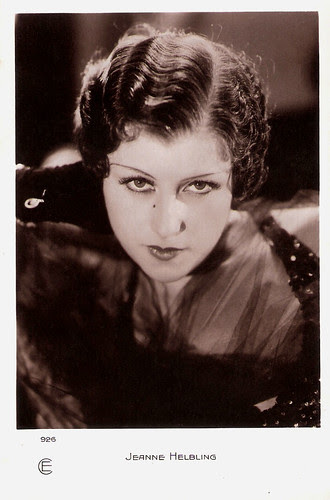 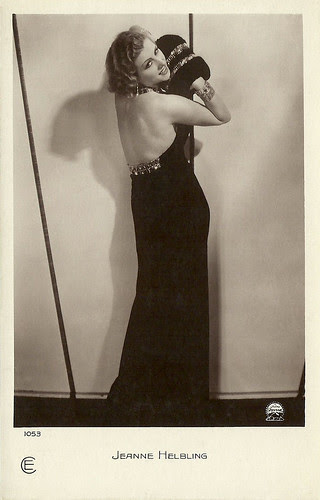 Chantal and the White Rabbit
Without much difficulty Jeanne Helbling passed on to talking pictures. In the meantime she did music-hall as well, such as a 1932 show with Josephine Baker at the Casino de Paris. Paramount France hired her to act at the studios of Joinville-Le-Pont for the French versions of films like Une femme a menti/The Lady Lies (1929, Charles de Rochefort), a multilingual shot at the same time in German, Swedish, Italian and Spanish. In the early 1930's Jeanne Helbling also played in American features destined for French audiences, such as L’aviateur/The Aviator (1931, William A. Seiter, Jean Daumery) with Douglas Fairbanks Jr., and Buster se marie/ (1931, Claude Autant-Lara) the French-language version of Buster Keaton's 1931 comedy Parlor, Bedroom and Bath. Until the outbreak of the Second World War, Helbling would act in some 40 films, mostly supporting parts in comedies. She played for instance Empress Eugénie in Les trois valses/Three Waltzes (1938, Ludwig Berger), starring Yvonne Printemps. Another example is Paix sur le Rhin/Peace on the Rhine (1938, Jean Choux), shot in Helbling’s natal region and dealing with a wine owner family of which two sons fight each other in the First World War. Helbling’s co-actors were Françoise Rosay, Pauline Carton, Michèle Alfa, and John Loder. The pacifist film, though, soon became unfit for the times. For a long time it was considered destroyed but in the late 20th century it was found and restored again. During the German occupation in Paris, Helbling joined the resistance under the name of Chantal. She hosted people from the resistance as well as Allies in her apartment in Rue Casimir Pinel in Neuilly. Within the framework of the triple mission Arquebuse-Brumaire-Seahorse, Pierre Brossolette, colonel Passy and Forest Yeo-Thomas organised in 1943 an important meeting which led to the creation of the Committee for the Coordination of the resistance movements in Northern France. This effected in the constitutive meeting of the national Council for the Resistance in Paris. Even though she was concerned about the Gestapo, Jeanne Helbling managed to survive the Second World War. She was honoured for her work by the state of France, in particular by General de Gaulle, as well as by the United Kingdom, who gave her the Order of the Empire for hosting the British agent Forest Yeo-Thomas, known as Shelley or The White Rabbit. After the Liberation, Helbling only did two more films, Dernier métro/The Last Metro (1945, Maurice de Canonge) with Gaby Morlay, and Jeux de femmes/Women's Games (1946, Maurice Cloche). In 1946 she married an American of French origin, Henri Garin. She retired from the film business and moved with her husband to the United States. Forty years after, Jeanne Helbling died in New York in 1985. She had just turned 82. 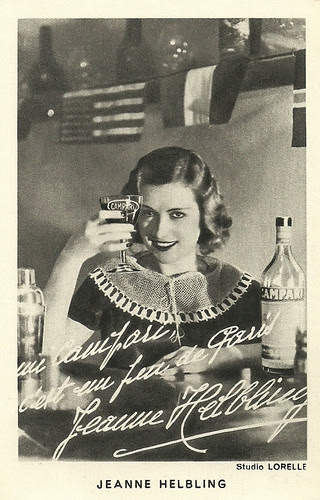