Handsome and sensitive Daniel Gelin (1921-2002) did not have an easy life but he was warmly embraced as one of the great stars of the French post-war cinema. The talented lead and character actor appeared to fine advantage for such legendary directors as Max Ophüls, Louis Malle, Jean Cocteau, Alfred Hitchcock, and Claude Lelouch. 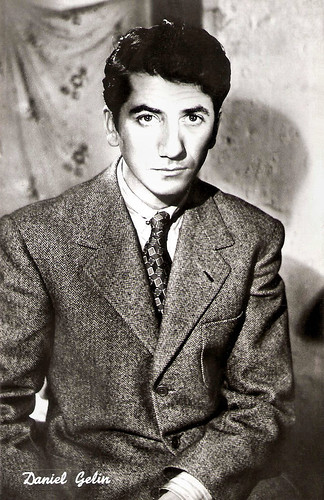 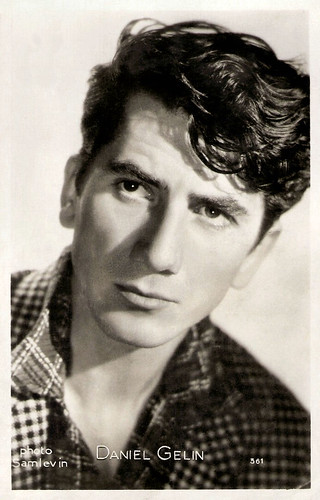 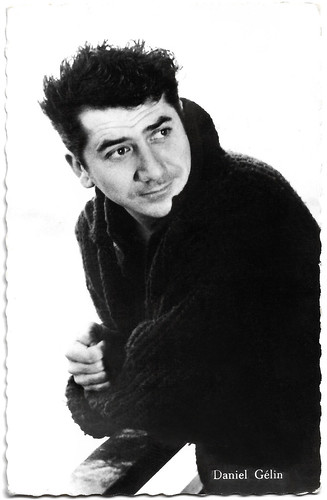 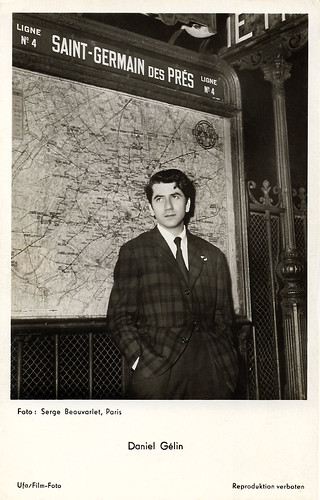 
Daniel Yves Alfred Gélin was born in Angers, France, in 1921. When he was 10 his family moved to Saint-Malo where Daniel went to college until he was expelled for 'uncouthness'. His father then found him a job in a shop that sold cans of salted cod.

It was seeing the shooting of Marc Allégret's film Entrée des artistes/The Curtain Rises (1936) with Louis Jouvet that triggered his desire to be an actor.

He left home at age 16 to take dramatic training by René Simon at the Cours Simon in Paris before entering the Conservatoire national d'art dramatique. There he met Louis Jouvet again and embarked on a theatrical career.

He made his first film appearance in Miquette (Jean Boyer, 1940) starring Lilian Harvey, and for several years he worked as an extra or bit player.

He appeared in a bigger role with Jean Gabin and Marlene Dietrich in the romantic melodrama Martin Roumagnac/The Room Upstairs (Georges Lacombe, 1946), and gradually he developed from small parts and light youth roles.

Finally, he won his first leading roles as a seductively moody heart-breaker in Rendez-vous de juillet/Appointment with Life (Jacques Becker, 1949) and Edouard et Caroline/Edward and Caroline (Jacques Becker, 1950) with Anne Vernon. These romantic comedies made him a star of the French cinema. 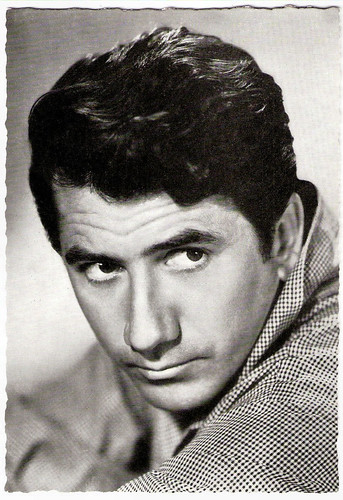 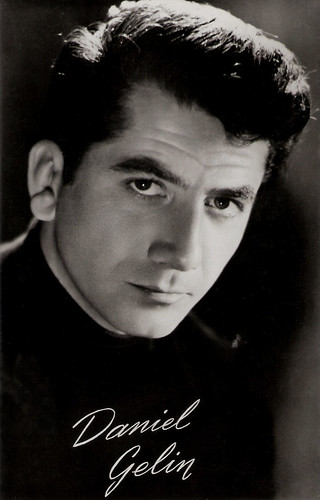 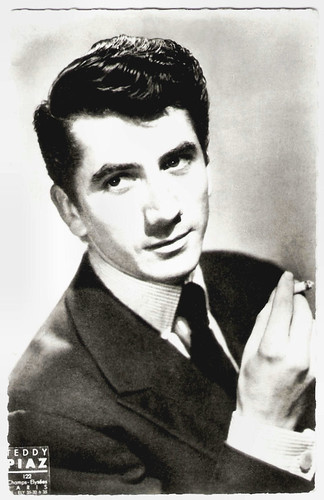 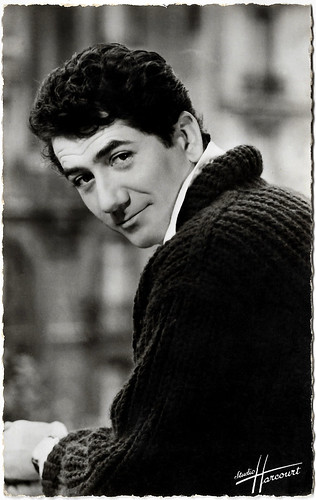 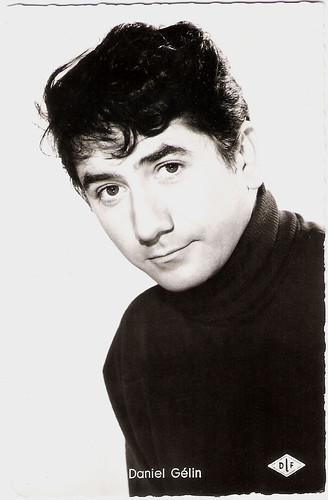 His personal life was a mess


Daniel Gélin went on to appear in more than 170 films, often in sensitive, literate, man-of-the-world roles. In the early 1950s, he formed with his wife Danièle Delorme a ‘dream couple’ of the French cinema and they starred together in light romances till their divorce in 1954.

He was especially good as the heavily disguised Arab spy in The Man Who Knew Too Much (Alfred Hitchcock, 1956) with James Stewart.

Despite these successes, Wikipedia writes that he squandered his talent and could have accomplished much more. His personal life was a mess. Gélin lived a turbulent life full of parties and stormy relationships that lead to suicide attempts and a long battle with alcohol and drugs. 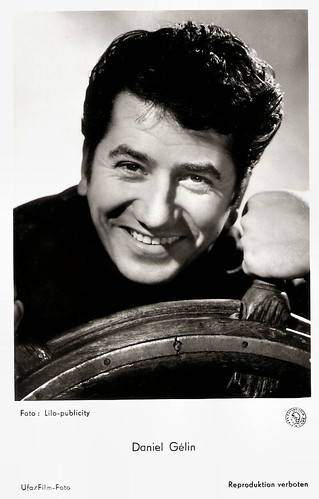 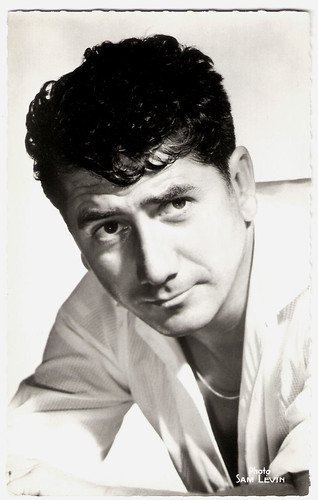 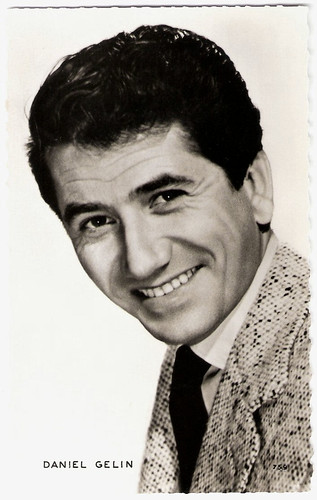 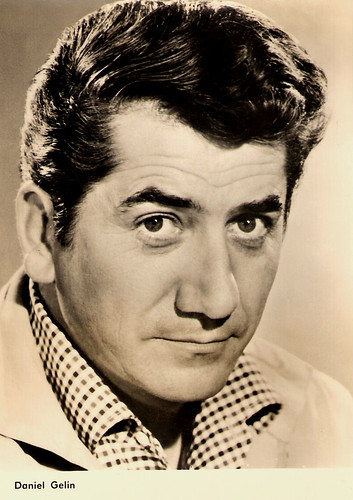 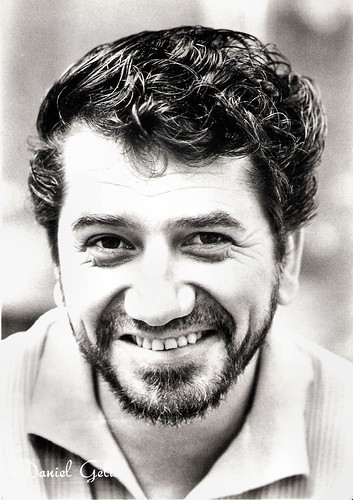 Italian postcard by Rotalfoto, Milano, no. 872.


During the 1960s, Daniel Gélin played in several films by Nouvelle Vague (New Wave) directors. For Costa-Gavras he appeared in Compartiment tueurs/The Sleeping Car Murders (1965), for Claude Chabrol in La Ligne de démarcation/Line of Demarcation (1966) with Jean Seberg, for Marguerite Duras in Détruire, dit-elle/Destroy, She Said (1969) and for Louis Malle in Le souffle au coeur/Murmur of the Heart (1971) with Lea Massari.

On television, he played in popular series like Les Saintes chéries (The Holy Cherished) (1965-1970). During the late 1970s, he disappeared from films until the early 1980s.

Daniel Gélin also worked in the theatre both as an actor and as a director. He appeared in plays by Molière, Jean Cocteau, Alberto Moravia, and Georges Siménon. He also wrote scenarios occasionally and published a few volumes of poetry.

Daniel Gélin died of kidney failure in a Paris hospital, in 2002. He had been married three times: first to Danièle Delorme (1945-1954), then to Sylvie Hirsh (1955-1968) and finally to Lydie Zaks (1973 till his death in 2002). While married to Danièle Delorme, he had an affair with model Marie Christine Schneider that produced a daughter, film star Maria Schneider. However, Gélin never acknowledged his paternity of her. His children Manuel Gélin and Fiona Gélin became actors too. His son Pascal died at the age of 14 months when he accidentally swallowed pills in 1957. Another son, producer Xavier Gélin died of cancer in 1999.


Trailer The Man Who Knew Too Much (Alfred Hitchcock, 1956). Source: Video Detective (YouTube).