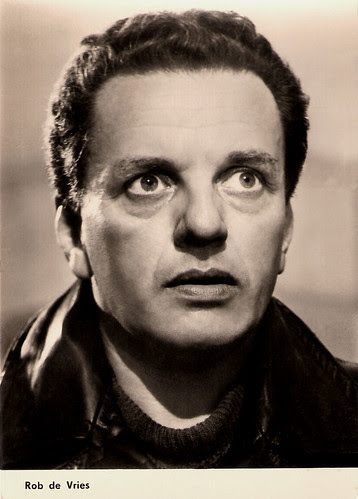 Arrested and Imprisoned
Rob de Vries was born as Abraham de Vries in Amsterdam, The Netherlands in 1918. After finishing high school he worked as a junior clerk at a trading office in Amsterdam. He was an extra in the Dutch film adaptation of George Bernard Shaw’s famous play Pygmalion (1937, Ludwig Berger). The film starred Lily Bouwmeester as Eliza Dolittle and also Eduard Verkade, one of the most prominent stage actors and directors of the Netherlands. Verkade offered to give him acting lessons. In 1938 De Vries made his acting debut for the Centraal Toneel company. He had a small role in the play De Wrekende God (the avenging God) by playwright Edward Veterman. He played briefly with the stage company of Jan Nooy and moved in 1939 to the company of Saalborn-Parser. During World War II, De Vries joined the resistance group of Eduard Veterman, where he did important work during the occupation. In 1943 he was arrested and imprisoned. He fled, however, the Utrecht prison and continued to do illegal work. After the war he took up his acting career and performed in plays like De wereld heeft geen wachtkamer (The world has no waiting room), Billy Bud, Peer Gynt and Het dagboek van Anne Frank (The Diary of Anne Frank). He also participated in several radio plays. His real film debut was as jeune premier in the comedy Een koninkrijk voor een huis/A kingdom for a house (1948, Jaap Speyer) starring Henriëtte Davids and Johan Kaart. It was the first Dutch post-war feature and it was a huge box office hit with 1.291.728 visitors. The film was also a success in Germany. Another local blockbuster was the drama Ciske de Rat/A Child Needs Love (1955, Wolfgang Staudte) in which De Vries played the father of the boy of the title (Dick van der Velde). This drama attracted 2.433.000 spectators which made it the third most popular Dutch film ever. It was shown at the Venice Film Festival, where it was awarded with a Silver Lion. There was also a German version of the film, Ciske: Ein Kind braucht Liebe. That same year he also appeared in the American TV series Secret File, U.S.A. (1955, Arthur Dreifuss a.o.) which was filmed in the Netherlands. The typical cold war series starred Robert Alda as an American intelligence agent, who goes on missions deep behind enemy lines to gather information about threats to American security and protect American diplomats abroad. 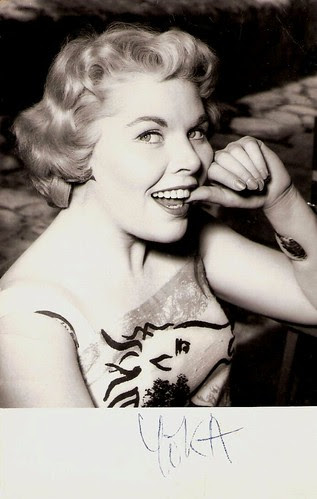 The Silent Raid
In the 1960's, Rob de Vries also appeared in the children’s film De Laatste Passagier/The Last Passenger (1961, Jef van der Heyden) in which his son Edwin de Vries also appeared as his film son. De Vries’ best known film is De Overval/The Silent Raid (1962, Paul Rotha). It shows a true story from World War II: the raid on Leeuwarden prison of 8 December 1944, on which De Vries had cooperated. Without firing a shot, Dutch resistance members disguised as German SD and their prisoners entered the prison, freed 39 prisoners and vanished into the city. The Germans were unable to find any of the organizers or escapees. Rob de Vries starred as resistance leader Piet Kramer. Other main roles were played by Kees Brusse, Yoka Berretty and Hans Culeman. The scenario was written by WW II historian Loe de Jong, and produced by the Dutch-German producer Rudolf Meyer. With 1,474,000 tickets sold, De Overval also became one of the most successful films ever in the Netherlands. It would be De Vries' last film, although he would later appear in some Dutch TV films and series. From 1961 until his death in 1969, De Vries was the director of the Nieuw Rotterdams Toneel (New Rotterdam Theater Company). Previously he was the director of Theater, a stage company in the city of Arnhem. In 1969, Rob de Vries died in Amsterdam. He was only 51. De Vries was married to Paula Faassen. Their sons Edwin and Bart de Vries are now both also well known actors in the Netherlands.