French actor and director Jules Berry (1883-1951) is best remembered for his superb character work in the films of Jean Renoir and Marcel Carné. He made his cinema debut in 1908 and his career would span four decades in which he made more than 80 films. 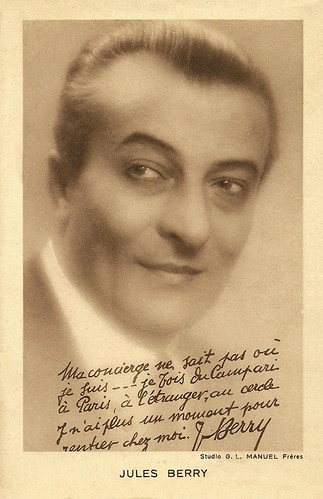 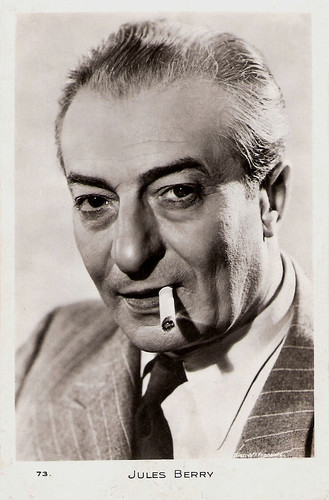 Front Rank Comedic Actor
Jules Berry was born as Marie Louis Jules Paufichet in Poitiers, France, in 1883. His parents moved to Paris where he studied architecture at l'École des Beaux-Arts, but he soon discovered an attraction to the theatre. His first job was as an apprentice at the Théâtre Antoine in 1903. Later he appeared at the stages of the Ambigu and the Théâtre de l'Athénée. In 1907 he had his first big success in George Feydeau's comedy La Duchesse des Folies-Bergères in Lyon. The following year he was engaged by the Théâtre des Galeries Saint-Hubert in Brussels, where he would stay for twelve years. After the First World War, Berry returned to Paris and appeared in a series of vaudevilles and light comedies. These were not particularly challenging but they did give him the opportunity to play a great variety of parts and to refine his talent. In the following decade he established a reputation as a front rank comedic actor. In his private life, Jules Berry was a ladies' man and a gambler (he gambled away much of what he earned in his life). Something of that aura of the dandy pervaded his performances: he became noted for his elegant appearance, vivid temperament, timing, and his ease at portraying both lovers and seducers — roles he was to be equally adept at playing in films. 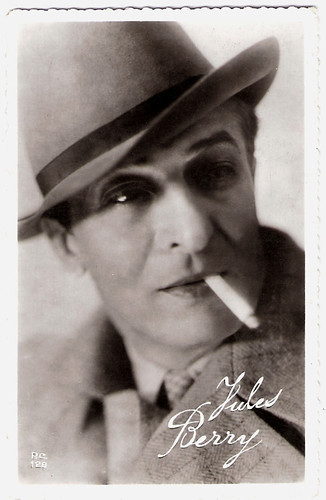 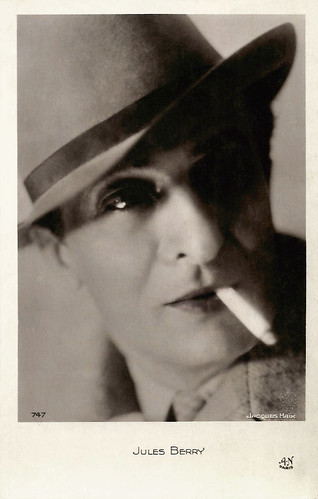 Films d'art
Jules Berry already made his first film appearances in the days of the early silent cinema. He appeared in such short films as Tirez s'il vous plait/Shoot Please (1908, Louis Gasnier), and the ‘films d'art’ productions Shylock (1910, Henri Desfontaines) and Olivier Cromwell (1911, Henri Desfontaines). In the following four decades he would appear in nearly 100 films. According to Karel Tabery at Filmreference.com Berry made his first important film appearance in L'Argent/The Money (1928, Marcel L’Herbier) starring Brigitte Helm, an adaptation of the work by Emile Zola. His first speaking role was in Mon coeur et ses millions/My Love and Her Millions (1930, André Berthomieu) at the side of Suzy Prim. In the early 1930’s, like many of his fellow stage actors, he made films abroad and worked in film studios in Stockholm, Budapest and Berlin, where he appeared in the French language version of Quick (1932, André Daven, Robert Siodmak) with Lilian Harvey. After returning to Paris he got a part in Arlette et ses papas/Arlette and her papas (1934, Henry Roussel), returned briefly to the stage, and then left the theater entirely for a time. He accepted any film offers that came his way without much concern for the quality of the script or the director. His reputation in the theater often served as a guarantee for many adaptations on plays, talky efforts that had little to do with the expressionistic techniques available to film. These unpretentious productions were popular with French audiences of the early 1930’s. 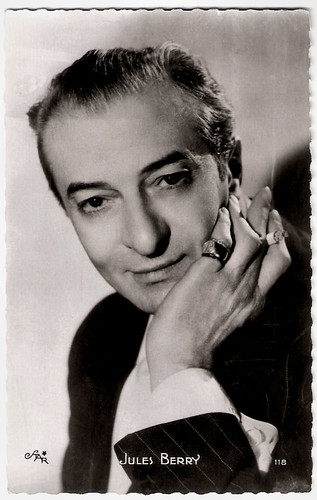 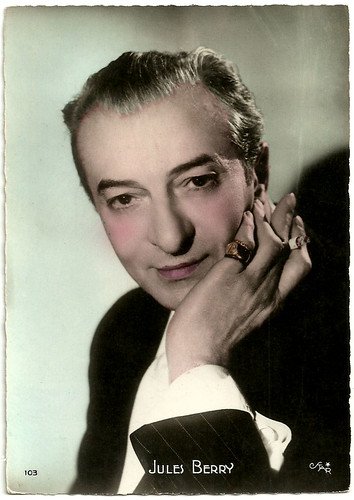 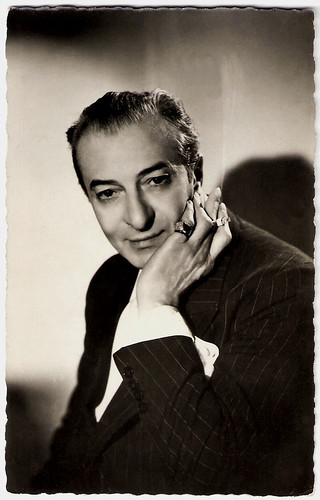 Cynical Don Juan
From 1933 until his death in 1951 Jules Berry appeared in as many as 10 films a year. In 1940 he made his last stage appearance, in Paris. Berry was the ideal representative of the usual hero — high society sophisticate, aristocrat, successful industrialist, cynical Don Juan. He played yet another variant on his usual range of characters in Le Crime de Monsieur Lange/The Crime of Monsieur Lange (1935, Jean Renoir), but this was a film written by Jacques Prévert and directed by Jean Renoir, and here Berry achieved a greater conciseness and dramatic tension in his performance than in his other films. Karel Tabery at Film Reference states that as the entrepreneur Batala, whose interests are dictated by his egoism, and who not only mercilessly exploits his employees but also tries to dupe them, Berry gave a performance that was universally admired. A more benign Jules Berry was seen as the title character in Arsene Lupin Detective/Arsene Lupin, Detective (1937, Henri Diamant-Berger). Another great film Tabery mentions is Le Jour se lève/Daybreak (1939, Marcel Carné) with a script by Jacques Prévert. Berry played a sadistic nightclub owner who obstructs the love of two young people. Berry gives a masterful performance of rich nuance, expressing a series of contradictory states of mind: a charlatan who sneers at human goodness and weakness, abuses his power, dissimulates, torments others with his cruelty, then tries to evoke pity for himself. 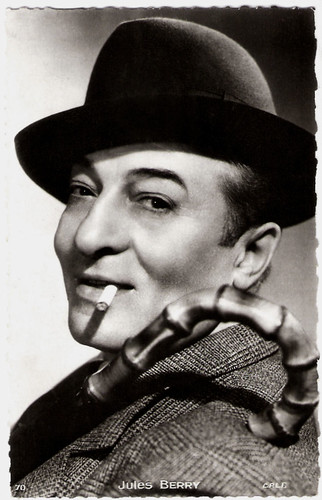 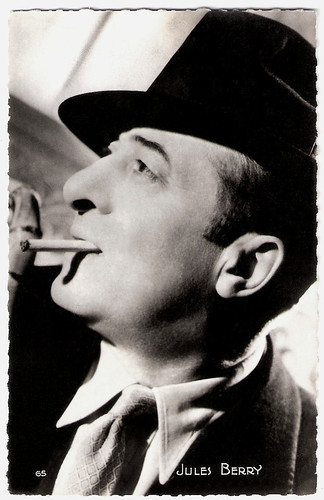 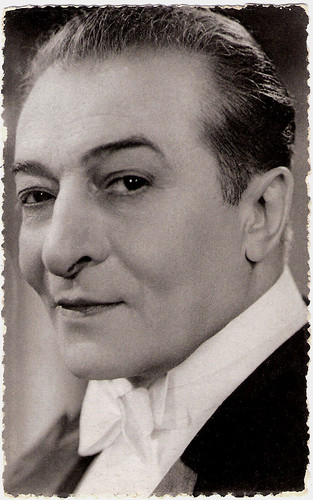 A Bureaucratic Satan
Jules Berry created a bureaucratic Satan in Les Visiteurs du soir/The Devil's Envoy (1942, Marcel Carné). The film was highly praised, and it marks a high point in Berry's career as a film actor. In the following years he made unpretentious detective films and played yet another unsympathetic character in the Georges Siménon mystery Le Voyageur de la Toussain/The Traveller of Toussain (1943, Louis Daquin). But Berry was not really offered the opportunities in the 1940’s that his talent and reputation should have commanded. An exception is the brilliant comedy Si jeunesse savait/If Youth Only Knew (1948, André Cerf). Berry plays a billionaire, and shows the exceptional range, technique, and mature interpretational style he had developed. He finished his film career in 1951 to interprete the texts of Jacques Prévert. Jules Berry died in Paris in 1951. He was married with the actresses Jane Marken, Suzy Prim, and Josseline Gaël. With the latter he had a daughter, Michèle.

It's really amusing to think of somebody named Apollonie Paris changing her name to Suzy Vernon.It's easier to imagine it the other way around. Fascinating information. It must take you a lot of time and work to put this all together. Very nicely done as always.