Attila Hörbiger (1896 - 1987) was a famous Austrian stage and film actor. In several German and Austrian films he played alongside his wife Paula Wessely, including the antisemitic propaganda film Heimkehr/Homecoming (1941). 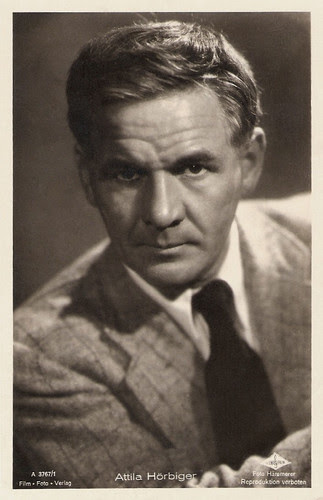 Great Passion
Attila Hörbiger was born in Budapest, Austria-Hungary, now Hungary, as the son of engineer Hanns Hörbiger. His older brother Paul Hörbiger would also become one of Austria’s most popular actors. The family moved to Vienna in 1903. Attila studied acting in Berlin, and in 1919, at the age of 23, he made his stage debut in an operetta at the Raimund Theater in Vienna. The stage became the great passion in his life. He was very successful at the Theater in der Josefstadt and later at the Burgtheater where he stayed active until 1975. He played Jedermann (Everyman) at the Salzburg Theater Festival from 1935 to 1938 and from 1947 to 1950. He also acted Rudolf von Habsburg in Grillparzer's König Ottokars Glück und Ende at the great reopening of the Burgtheater on 15 October 1955. Although his heart belonged to the theatre he also appeared in countless films. He had his first film appearance in the grand production of Sodom und Gomorra (1922, Mihály Kertész/Michael Curtiz). Other silent films followed including Nachtlokal/Nightclub (1929, Max Neufeld) starring Evelyn Holt, Lebende Ware/Living goods (1929, Robert Wohlmuth), and Die Tat des Andreas Harmer/ (1930, Alfred Deutsch-German
) featuring Oscar Marion, in which he often impersonated villains and imperious characters. 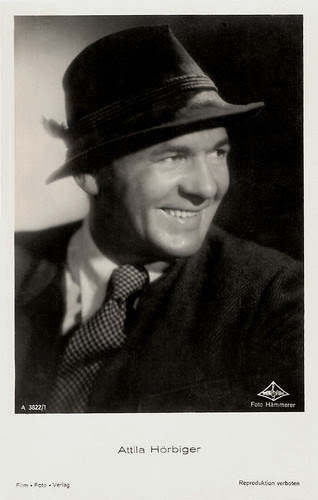 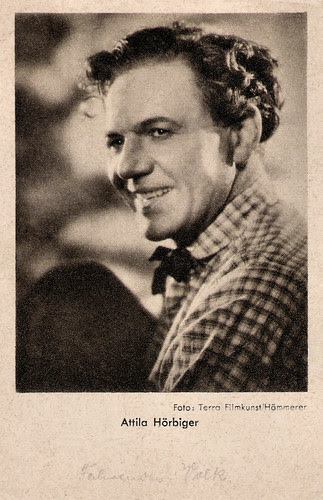 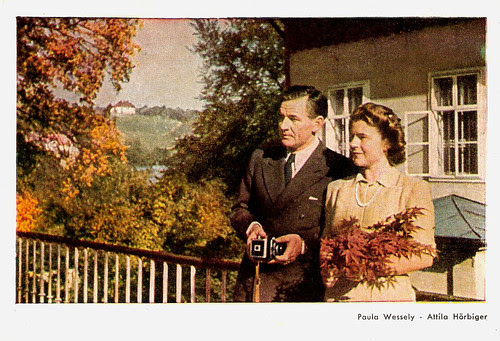 Karl May
After the war Attila Hörbiger was able to continue his theatre and film career smoothly. To his most popular post-war films belong Am Ende der Welt/At the Edge of the World (1947, Gustav Ucicky) with Brigitte Horney, Gottes Engel sind überall/God's Angels Are Everywhere (1948, Hans Thimig) with Paul Hubschmid, Maresi (1948, Hans Thimig) with Maria Schell, Der Engel mit der Posaune/The Angel with the Trumpet (1948, Karl Hartl), Das vierte Gebot/Yhe Fourth Commandment (1950, Eduard von Borsody), Maria Theresia (1951, Emil E. Reinert), Spionage/Espionage (1955, Franz Antel), Der Meineidbauer/The Perjured Farmer (1956, Rudolf Jugert) and Der Edelweisskönig/The Edelweiss King (1957, Gustav Ucicky) with his daughter Christiane Hörbiger. His appearances in front of the camera waned from the 1960's on in favour of theater and TV. To his last films belong Karl May (1974, Hans-Jürgen Syberberg) and the TV film Die weisse Stadt/The White City (1980, Michael Kehlmann). Attila Hörbiger received many awards during his long career, like the Bundesverdienstkreuz (Germany's Cross of Merit) in 1954. Hörbiger appeared in theatre performances until 1985. Two years later he died in Vienna at the age of 91 following a stroke. He is the grandfather of actor Cornelius Obonya, the son of Elisabeth Orth.