Italian model and actress Maria Frau (1930) was a very photogenic starlet of the European cinema of the 1950s. 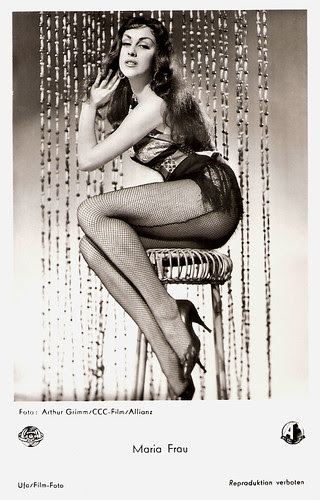 Lovely Illegitimate Daughter
Maria Frau was born in Sassari on the island of Sardinia in 1930. Very photogenic, she appeared in a photo shoots of various weeklies. In 1950, she was cast in the lead role of a 13th Century mystic in the historical film Margherita da Cortona/Margaret of Cortona (Mario Bonnard, 1950). Her voice was dubbed by Lydia Simoneschi. It was the start of a brief career in the European cinema. Frau played the female lead in Luna rossa/Red Moon (Armando Fizzarotti, 1951) opposite Renato Baldini, and Il lupo della frontier/Frontier Wolf (Edoardo Anton, 1951) with Piero Lulli. Other Italian productions in which she starred were the adventure film Sul ponte dei sospiri/On the bridge of sighs (Antonio Leonviola, 1953) with Françoise Rosay, Questi fantasmi/These Phantoms (Eduardo De Filippo, 1954) starring Renato Rascel. Her first foreign film was the French comedy J'avais sept filles/My Seven Little Sins (Jean Boyer, 1954) in which she played one of the seven lovely illegitimate daughters of an old French count (Maurice Chevalier) who keeps an index of all his past loves. Didier Dumonteil at IMDb: “Maurice Chevalier is absolutely unbearable as an old beau who wants to be still young (‘tomorrow I'm 20’ is one of his repetitive songs). Only 'ham' can describe his work; the same can apply to the seven girls who pass for his illegitimate daughters (?), for his son (played by stage and TV actor Louis Velle), who is more interested in insects than in women, for the servant (an abominable Paolo Stoppa).” Impossibly Beautiful Woman
Back in Italy, Maria Frau co-starred as Cleopatra opposite Totò in his comedy Totò all'inferno/Totò in Hell (Camillo Mastrocinque, 1955). Then she appeared in the German-Italian adventure film Stern von Rio/Star from Rio (Kurt Neumann, 1955) with Johannes Heesters, Franco Andrei and Willy Fritsch, and in the French-Italian detective film Vous pigez?/Diamond Machine (Pierre Chevalier, 1955) opposite Eddie Constantine in his standard guise of hard-boiled American G-man Lemmy Caution. Hal Erickson at AllMovie: “The plot is the usual mélange of intrigue, double-crosses and impossibly beautiful women. The delectable damsels in this outing include the toothsome Maria Frau, Nadine Tallier and Irene Tunc.“ In 1957, Frau left the film business to marry a Roman nobleman. Her last film had been the peplum La Venere di Cheronea/The Venus of Cheronea (Fernando Cerchio, Viktor Tourjansky, 1957) in which Belinda Lee featured as Afrodite. Hal Erickson calls it an ‘overheated melodrama’: “Naturally, the plotline requires the curvaceous Lee to disrobe at the slightest provocation, and just as naturally, the censors had a hissy-fit every time she bared her knee or shoulder. The principal attribute of La Venere di Cheronea is the excellent color cinematography of Arturo Galles.” Maria Frau had acted in 16 films.