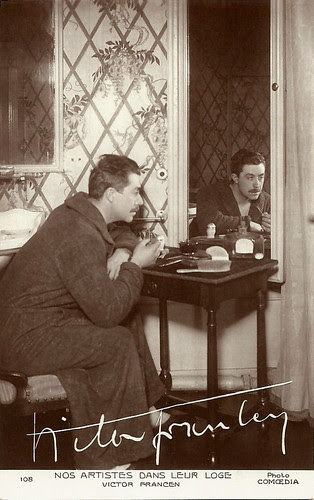 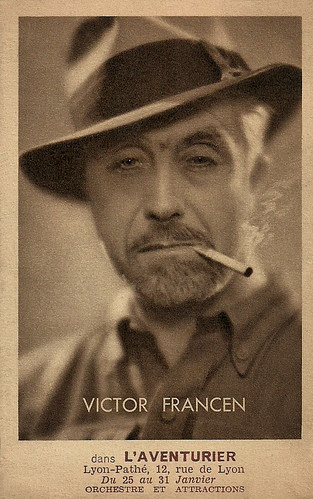 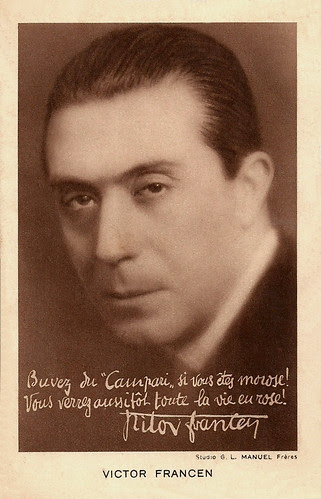 His Distinguished, Even Arrogant Poses
In 1889 (according to Caroline Hanotte on Ciné-Artistes; IMDb says 1888), Victor Francen was born as Victor Charles Sidonie Franssens in Tienen (Tirlemont), Belgium – a few years after Francen, in 1897, famous actor Fernand Ledoux would be born in Tienen as well. Francen was the son of a chief of police. Victor worked in trade in Belgium before changing to acting. He moved to Paris, where he trained in dramatic art under Paul Mounet. In the 1920's Francen performed in plays by Henri Bernstein, Georges Bataille and Edmond Rostand and travelled all over Europe, Canada and South-America with this repertory. He even became ‘pensionnaire’ at the Comédie Française until 1940. He acted in three lesser known silent features: Crépuscule de l’épouvante (1921), La neige sur le pas (1923), and La doute (1923). Then he played Martial Novalic, the brother of poet Jean Novalic (Abel Gance) in Gance’s first sound film, the apocalyptic La Fin du monde/The End of the World (1931, Abel Gance), co-starring Colette Darfeuil. It turned Francen instantly into a new French film star. His distinguished, even arrogant poses and his perfect diction thanks to his stage acting made him the perfect interpreter of dignitaries and rich bourgeois, but just as easily he played action heroes and dangerous seducers. In 1931 Victor Francen retook the part of Flambeau in an adaptation of Edmond Rostand’s play L’aiglon (1931, Victor Tourjansky), with Jean Weber in the title role. The same year Francen acted with Gaby Morlay in Après l’amour (1931, Léonce Perret) and Ariane, une jeune fille russe (1932, Paul Czinner), followed by Mélo (1932, Paul Czinner) again with Morlay. He then starred in Les ailes brisées (1933, André Berthomieu) with Alice Field, and Le voleur (1933, Maurice Tourneur), with Paul Amiot and Jean-Pierre Aumont. In 1934 Francen played a social outsider who loathes bourgeois morality in Marcel L’Herbier’s L’aventurier. It would be the start of a long collaboration between L’Herbier and Francen. He reunited with Gaby Morlay in Nuit de feu (1935, Marcel L'Herbier) and in Le Roi (1935, Pierre Colombier) with Raimu. In 1937 he acted with acclaimed stage actress Vera Korène in Tamara, la complaisante (1937, Felix Gandera, Jean Delannoy). He also played future king Edward VII in Entente Cordiale (1939, Marcel L'Herbier). Among the aging actors in La fin du jour (1939, Julien Duvivier), Francen played a dramatic part as the deluded and washed out actor opposite the ageing beau Louis Jouvet, one of Francen’s best parts. With his seemingly impassive face, Francen was present in countless films in which the technological, humanitarian and military power in the whole world was manifested. In Forfaiture (1937, Marcel L'Herbier) he was an engineer in Mongolia, opposite Sessue Hayakawa. In L’homme du Niger (1939, Jacques de Baroncelli) with Harry Baur, he fought tropical diseases and constructed dams. He was a doctor in L’appel de la vie (1936, Georges Neveux) with Suzy Prim, and he was the pacifist scientist Jean Diaz in J’accuse! (1938, Abel Gance) – Gance’s own remake of his silent film of 1919. Francen also played twice a captain in the French navy: in Veille d’armes (1935, Marcel L'Herbier) he is court-martialled but saved by Annabella, and in La porte du large (1936, Marcel L'Herbier) he is the unfortunate rival of his own son, played by Jean-Pierre Aumont. He also played the title role in Le Chemineau (1935, Fernand Rivers) and capitain Bruchot in Double crime sur la ligne Maginot (1937, Felix Gandera), based on the novel of officer Pierre Nord, who would become Head of the Resistance and anathema for the Germans during the occupation. After his divorce of his first wife, actress Renée Corciade, he had a tumultuous second marriage of some seven years with actress Mary Marquet (her husband wasn’t very faithful). 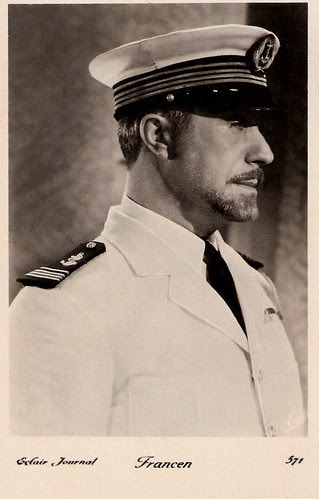 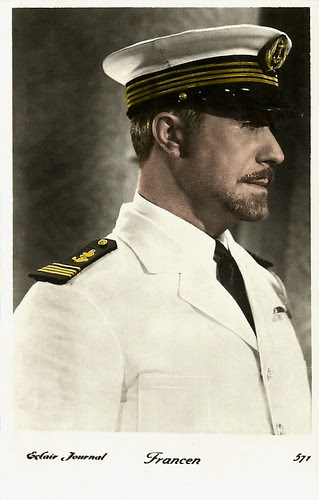 Mocking His Former Imago As Seducer
In 1940, after his second divorce, Victor Francen went to Hollywood in 1940, thus also escaping the war threat. There Charles Boyer introduced him into the film world, and let him co-act with him in the Paramount film Hold Back the Dawn (1941, Mitchell Leisen). In contrast to many other emigré actors from Europe, Francen had quite a good career in the American cinema during the war years. However he was often typecasted and initially switched from one company to another. He played opposite Charles Laughton in The Tuttles of Tahiti (1942, Charles Vidor), with Maureen O’Hara in Ten Gentlemen from West Point (1942, Henry Hathaway), and with Boyer and Rita Hayworth in Tales of Manhattan (1942, Julien Duvivier). In 1943 he played a Soviet trial prosecutor in the pro-USSR film Mission to Moscow (1943, Michael Curtiz), the President of the University in Madame Curie (1943, Mervyn LeRoy), an Arab in The Desert Song (1943, Robert Florey). From 1943 on Francen became a regular actor for Warner Brothers, mostly playing exotic types, nazi’s and other bad guys. He did so in In Our Time (1944, Vincent Sherman) with Ida Lupino, Passage to Marseille (1944, Michael Curtiz) with Humphrey Bogart, The Mask of Dimitrios (1944, Jean Negulesco) with Peter Lorre, The Conspirators (1944, Jean Negulesco) with Paul Henreid. After the war Francen continued at Warners in Confidential Agent (1945, Herman Shumlin) with Boyer and Lauren Bacall, San Antonio (1945, David Butler, Robert Florey, Raul Walsh) starring Errol Flynn, Devotion (1946, Curtis Bernhardt), the Cole Porter biopic Night and Day (1946, Michael Curtiz) starring Cary Grant, and The Beast with Five Fingers (1946, Robert Florey). He did sidestep at MGM for the docudrama on the Hiroshima bomb The Beginning or the End (1947, Norman Taurog) with Brian Donlevy. Then Francen returned to Warners to play a French police inspector in To the Victor (1948, Delmer Daves) with Viveca Lindfors. In 1948 Francen returned to France to star opposite Josette Day in his old director Marcel L’Herbier’s La revoltée/Stolen Affections. The film co-starred such other prewar stars as Jaque Catelain, Sylvio de Pedrelli and Rolla Norman but the it was not a huge success. Neither was Francen’s second try in France in La nuit s’achève (1948, Pierre Méré) with Ludmilla Tchérina. So he returned to the States, to act in Adventures of Fabian (1951), starring Errol Flynn and Micheline Presle, and partly shot in France. In 1953 he acted in Samuel Fuller’s submarine drama Hell and High Water (1954), with Richard Widmark; followed by Bedevilled (1955, Mitchell Leisen) with Anne Baxter, and A Farewell to Arms (1957, Charles Vidor) with Rock Hudson and Jennifer Jones. In the late 1950's Francen returned to Europe to play in the British ITV Play of the Week The Strong Are Lonely (1958, Julian Aymes). He also had a small part in Fritz Lang’s two-part film Das Indische Grabmal/Der Tiger von Ischnapur (1959). Back in the US, Francen played in The Road (1959), an episode of the Loretta Young TV series Letter to Loretta. In 1960 he also had a small part in the American adaptation of Fanny ( Joshuah Logan), starring Leslie Caron. In the early 1960's Francen returned to France. In the meantime he had divorced his third wife, the American Eleanor Kreutzer, with whom he had a son. Mocking his former imago as seducer, he co-acted with Bourvil in the comedy La grande frousse (1964, Jean Pierre Mocky), and had a small part in the Italian film Top Crack (1966, Mario Russo). His last part was that of an Italian Don in the episode Vendetta (1966, Alf Kjellin) of the American TV-series I Spy, which oddly enough casted prewar Italian stars such as Massimo Serato but also Bill Cosby. Francen remarried for the fourth time and withdrew to the French region of Aix-en Provence, where he died in 1977. (IMDb states as the location Saint-Cannat, Bouches-du-Rhône). 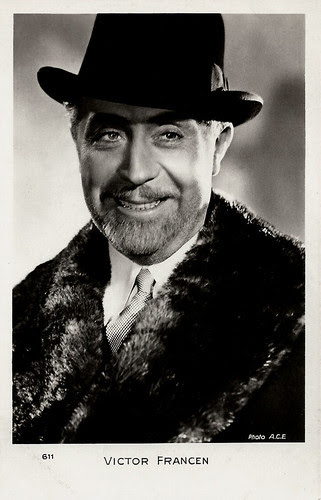 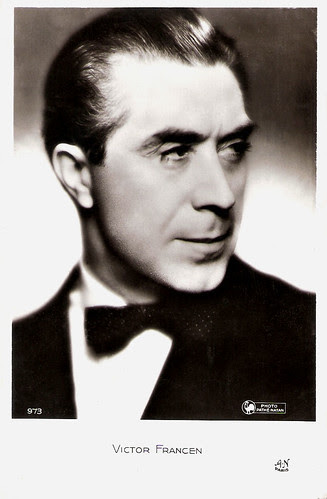 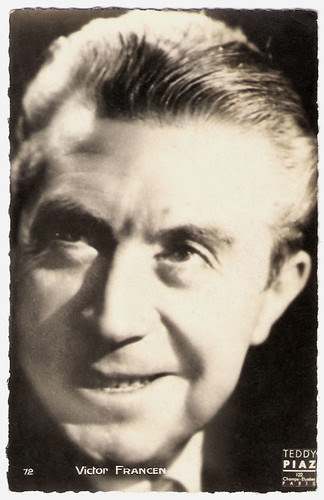