Imported from the USA: Anna May Wong

Stunning Anna May Wong (1905-1961) was the first Chinese American movie star, and the first Asian American actress to gain international recognition. Frustrated by the stereotypical supporting roles she reluctantly played in Hollywood, Wong left for Europe, where she starred in such classics as Piccadilly (1929). 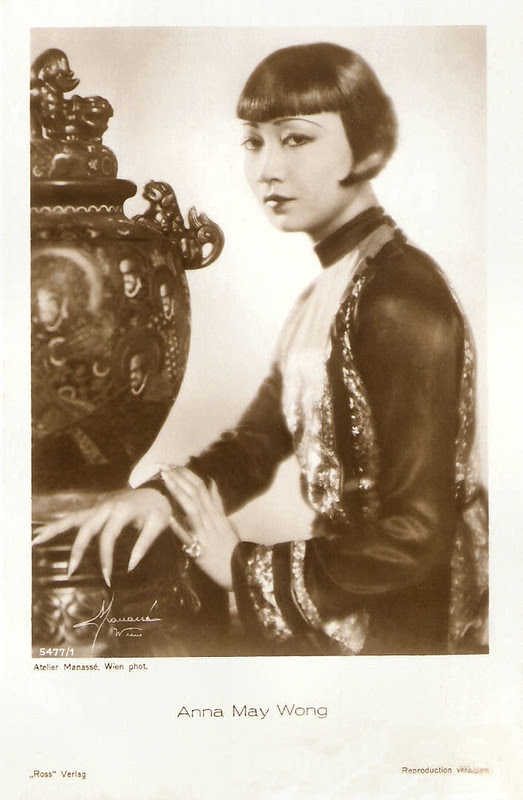 Anna May Wong (Chinese: 黃柳霜; pinyin: Huáng Liǔshuāng) was born Wong Liu Tsong (Frosted Yellow Willows) near the Chinatown neighbourhood of Los Angeles in 1905. She was the second of seven children born to Wong Sam Sing, owner of the Sam Kee Laundry in Los Angeles, and his second wife Lee Gon Toy.

Wong had a passion for the movies. By the age of 11, she had come up with her stage name of Anna May Wong, formed by joining both her English and family names.

Wong was working at Hollywood's Ville de Paris department store when Metro Pictures needed 300 girl extras to appear in The Red Lantern (Albert Capellani, 1919) starring Nazimova as a Eurasian woman who falls in love with an American missionary. The film included scenes shot in Chinatown. Without her father's knowledge, a friend of his with movie connections helped Anna May land an uncredited role as an extra carrying a lantern.

In 1921 she dropped out of Los Angeles High School to pursue a full-time acting career. Wong received her first screen credit for Bits of Life (Marshall Neilan, 1921), the first anthology film, in which she played the abused wife of Lon Chaney, playing a Chinaman.

At 17, she played her first leading part, Lotus Flower, in The Toll of the Sea (Chester M. Franklin, 1922), the first Technicolor production. The story by Hollywood's most famous scenarist at the time, Frances Marion, was loosely based on the opera Madame Butterfly but moved the action from Japan to China.

Wong also played a concubine in Drifting (Tod Browning, 1923) and a scheming but eye-catching Mongol slave girl running around with Douglas Fairbanks Jr in the super-production The Thief of Bagdad (Raoul Walsh, 1924).

In Peter Pan (Herbert Brenon, 1924), shot by her cousin cinematographer James Wong Howe, she played Princess Tiger Lily who shares a long kiss with Betty Bronson as Peter. Peter Pan was the hit of the Christmas season.

She appeared again with Lon Chaney in Mr. Wu (William Nigh, 1927) at MGM and with Warner Oland and Dolores Costello in Old San Francisco (Alan Crosland, 1927) at Warner Brothers.

Wong starred in The Silk Bouquet/The Dragon Horse (Harry Revier, 1927), one of the first US films to be produced with Chinese backing, provided by San Francisco's Chinese Six Companies. The story was set in China during the Ming Dynasty, and featured Asian actors playing the Asian roles.

Hollywood studios didn't know what to do with Wong. Her ethnicity prevented US filmmakers from seeing her as a leading lady.

Frustrated by the stereotypical supporting roles as the naïve and self-sacrificing ‘Butterfly’ and the evil ‘Dragon Lady’, Anna May Wong left for Europe in 1928.

A Sensation In Europe

The New York Times reported that Wong was "acclaimed not only as an actress of transcendent talent but as a great beauty (...) Berlin critics, who were unanimous in praise of both the star and the production, neglect to mention that Anna May is of American birth. They mention only her Chinese origins."

In Vienna, she played the title role in the stage operetta Tschun Tschi in fluent German.

Wong became an inseparable friend of the director Leni Riefenstahl.

According to Wikipedia, her close friendships with several women throughout her life, including Marlene Dietrich, led to rumours of lesbianism which damaged her public reputation.

London producer Basil Dean bought the play A Circle of Chalk for Wong to appear in with the young Laurence Olivier, her first stage performance in the UK.

Gilda Gray was the top-billed actress, but Variety commented that Wong "outshines the star", and that "from the moment Miss Wong dances in the kitchen's rear, she steals Piccadilly from Miss Gray."

It would be the first of five English films in which she had a starring role, including her first sound film The Flame of Love (Richard Eichberg, Walter Summers, 1930).

American studios were looking for fresh European talent. Ironically, Wong caught their eye and she was offered a contract with Paramount Studios in 1930.

She was featured in Daughter of the Dragon (Lloyd Corrigan, 1931) as the vengeful daughter of Fu Manchu (Warner Oland), and with Marlene Dietrich in Shanghai Express (Josef von Sternberg, 1932).

Wong spent the first half of the 1930s travelling between the United States and Europe for film and stage work.

She repeatedly turned to the stage and cabaret for a creative outlet. On Broadway, she starred in the drama On the Spot, that ran for 167 performances and which she would later film as Dangerous to Know (Robert Florey, 1938). 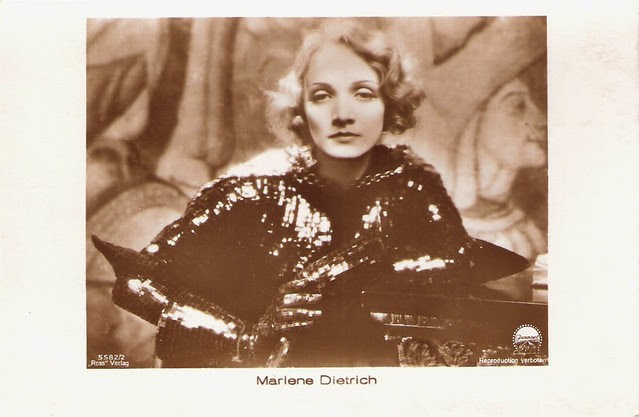 Too Chinese To Play A Chinese

Anna May Wong became more outspoken in her advocacy for Chinese American causes and for better film roles.

Because of the Hays Code's anti-miscegenation rules, she was passed over for the leading female role in The Son-Daughter (Clarence Brown, 1932) in favour of Helen Hayes.

Metro-Goldwyn-Mayer deemed her ‘too Chinese to play a Chinese’ in the film, and the Hays Office would not have allowed her to perform romantic scenes since the film's male lead, Ramón Novarro, was not Asian.

Wong was scheduled to play the role of a mistress to a corrupt Chinese general in The Bitter Tea of General Yen (Frank Capra, 1933), but the role went instead to Toshia Mori.

Her British film Java Head (Thorold Dickinson, J. Walter Ruben, 1934) was the only film in which Wong kissed the lead male character, her white husband in the film.

In 1935 she was dealt the most severe disappointment of her career, when Metro-Goldwyn-Mayer refused to consider her for the leading role of the Chinese character O-Lan in the film version of Pearl S. Buck's The Good Earth (Sidney Franklin, 1937).

Wong spent the next year touring China, visiting her father and her younger brothers and sister in her family's ancestral village Taishan and studying Chinese culture.

To complete her contract with Paramount Pictures, she starred in several B movies, including Daughter of Shanghai (Robert Florey, 1937), Dangerous to Know (Robert Florey, 1938), and King of Chinatown (Nick Grinde, 1939) with Akim Tamiroff.

These smaller-budgeted films could be bolder than the higher-profile releases, and Wong used this to her advantage to portray successful, professional, Chinese-American characters.

Wong's cabaret act, which included songs in Cantonese, French, English, German, Danish, Swedish, and other languages, took her from the US to Europe and Australia through the 1930s and 1940s.

She paid less attention to her film career during World War II, but devoted her time and money to helping the Chinese cause against Japan.

Wong starred in Lady from Chungking (William Nigh, 1942) and Bombs over Burma (Joseph H. Lewis, 1943), both anti-Japanese propaganda made by the poverty row studio Producers Releasing Corporation. She donated her salary for both films to United China Relief.

She invested in real estate and owned a number of properties in Hollywood. 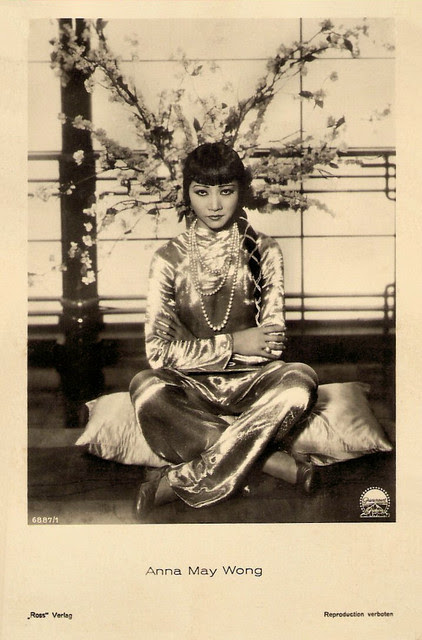 Anna May Wong returned to the public eye in the 1950s in several television appearances as well as her own detective series The Gallery of Madame Liu-Tsong (1951-1952), the first US television show starring an Asian-American series lead.

After the completion of the series, Wong's health began to deteriorate. In late 1953 she suffered an internal hemorrhage, which her brother attributed to the onset of menopause, her continued heavy drinking, and financial worries.

In the following years, she did guest spots on television series.

In 1960, she returned to film playing housekeeper to Lana Turner in the thriller Portrait in Black (Michael Gordon, 1960).

She was scheduled to play the role of Madame Liang in the film production of Rodgers and Hammerstein's Flower Drum Song (Henry Koster, 1961), when she died of a heart attack at home in Santa Monica in 1961.

Anna May Wong was 56. For decades after her death, Wong was remembered principally for the stereotypical sly ‘Dragon Lady’ and demure ‘Butterfly’ roles that she was often given.

Matthew Sweet in The Guardian: “And this is the trouble with Anna May Wong. We disapprove of the stereotypes she fleshed out - the treacherous, tragic daughters of the dragon - but her performances still seduce, for the same reason they did in the 1920s and 30s.”

Her life and career were re-evaluated by three new biographies, a meticulous filmography, and a British documentary about her life, called Frosted Yellow Willows.

Wikipedia: “Through her films, public appearances and prominent magazine features, she helped to ‘humanize’ Asian Americans to white audiences during a period of overt racism and discrimination. Asian Americans, especially the Chinese, had been viewed as perpetually foreign in U.S. society but Wong's films and public image established her as an Asian-American citizen at a time when laws discriminated against Asian immigration and citizenship.”

But no biographer can say for sure that any of these affairs occurred.

This was the fourth episode of 'Imported from the USA'. The first three episodes were dedicated to Jayne Mansfield, Josephine Baker, and Lex Barker.