Dorian Gray (1928-2011) was a very elegant Italian actress in films by Michelangelo Antonioni and Federico Fellini. She was also a sexy seductress in comedies with Totò. In 1965, Gray completely vanished from the public eye. 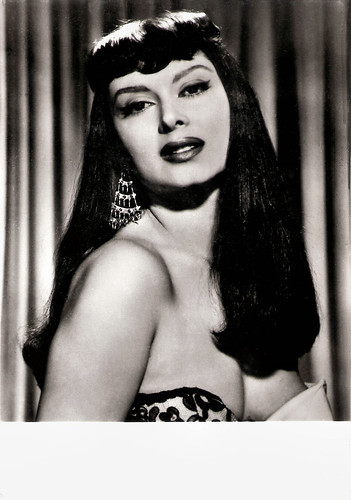 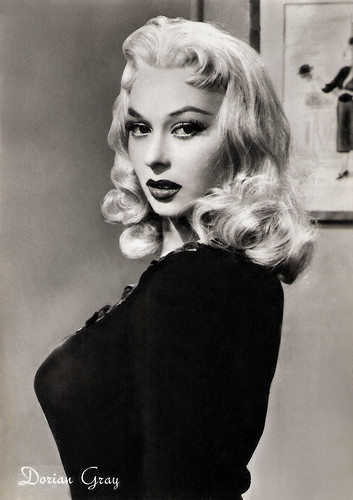 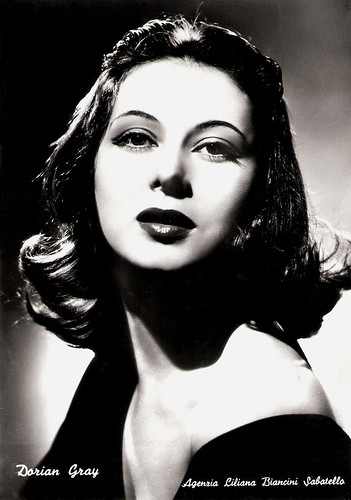 
Dorian Gray was born as Maria Luisa Mangini in Bolzano, South Tyrol, in 1928. She was the daughter of Attilio Mangini and Flora Divina. At the Scala Theatre in Milan, she studied dance with Aurel Millos.

In 1950, she made her stage debut in a show with Pina Renzi. The choreographer adviced her to take the stage name of Dorian Gray, of clear literary inspiration. She then moved on to the theatre and quickly became a known and acclaimed actress. However, after only five years she left the world of the theatre and devoted herself to the cinema.

In 1951, she already had made her film debut in the crime drama Amo un assassino/Appointment for Murder (Baccio Bandini, 1951) with Delia Scala.

The role she played most often in films was that of a seductive sex kitten in comedies like Totò, Peppino e la malafemmina/Toto, Peppino, and the Hussy (Camillo Mastrocinque, 1956). Gray appears as a variety dancer who falls in love with the nephew of Totò and Peppino De Filippo (played by Teddy Reno). It was the top-grossing film of the year in Italy and is now considered as one of the classics of Italian comedy.

The following year, she had the chance to demonstrate her dramatic talents as the petrol station attendant Virginia in Michelangelo Antonioni's Il grido/The Cry (1957). She co-starred with Steve Cochran, Alida Valli, and Betsy Blair to great critical acclaim. With this role she moved away from the image of the sensous, sexy blonde.

At the peak of her popularity, she also took part as Jessy, Amedeo Nazzari's lover in Le notti di Cabiria/Nights of Cabiria (Federico Fellini, 1957) featuring Giulietta Masina. The film was loaded with awards, including an Oscar for Best Foreign Language Film in 1958. For the film Mogli pericolose/Dangerous wives (Luigi Comencini, 1958), Dorian Gray herself was rewarded with a Nastro d'Argento as Best Supporting Actress. 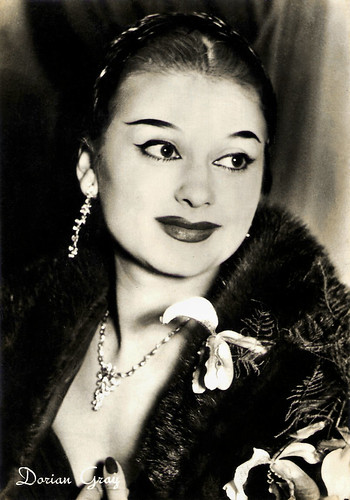 Italian postcard by Rotalfoto, Milano, no. 268. 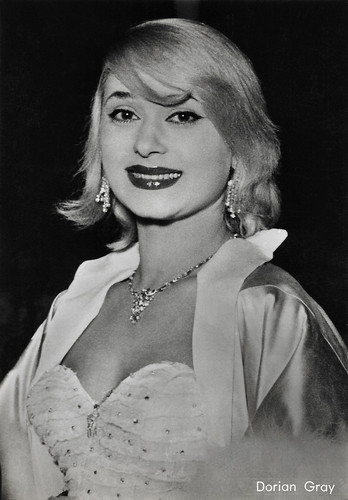 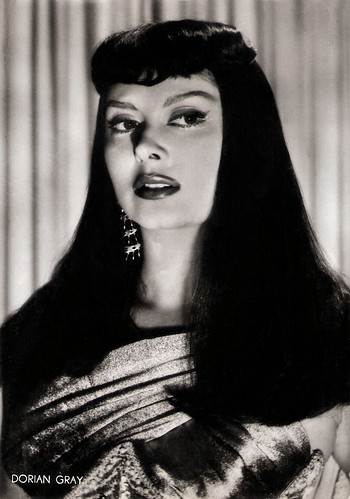 Italian postcard by Bromostampa, Milano, no. 382. 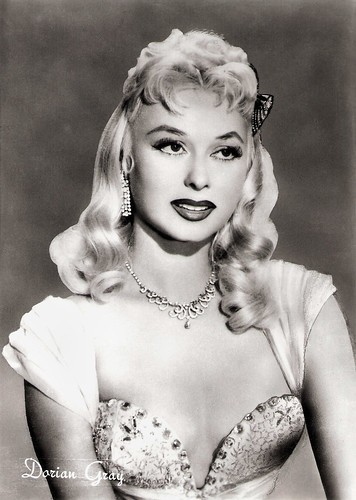 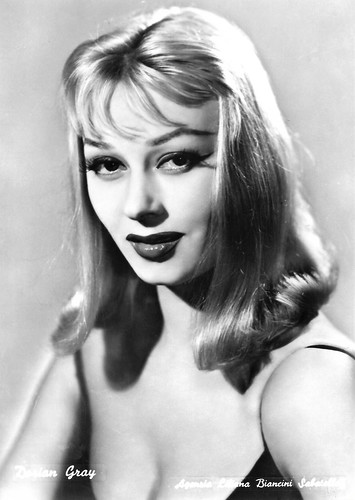 After 1958, Dorian Gray made several more films, but none ever had the shine of her works of 1956, 1957 and 1958. She became romantically involved with Arturo Tofanelli, journalist and editor of the magazine Tempo, who over the years dedicated many covers to Dorian Gray. Tofanelli also helped the diva's career by producing or co-producing several films in which she was one of the protagonists.

She starred with Vittorio Gassman in the comedy Il mattatore/Love and Larceny (Dino Risi, 1960). She also played in one of the Peplums of that era, La regina delle Amazzoni/Colossus and the Amazons (Vittorio Sala, 1960) In this satirical Sword and Sandal comedy she starred opposite two actors imported from America, Rod Taylor, and bodybuilder Ed Fury.

She was among the all-star cast of the whodunit-comedy Crimen/...And Suddenly It's Murder! (Mario Camerini, 1960). She played the love interest of Foreign Legion captain Stewart Granger in the international production, Marcia o crepa/Commando (Frank Wisbar, 1962). This action-drama was the first film to deal explicitly with the Algerian war.

After that, she acted in numerous comedies and spy films until the mid-1960s. After the birth of her son with Tofanelli, Massimo Arturo Tofanelli, she retired from acting completely. In 1965, her final film was released, Fango sulla metropolis/City Criminals (Gino Mangini, 1965) with Tony Kendall. Gray never made another public appearance.

In 2011, Dorian Gray committed suicide by gunshot at her home in Torcegno, Italy. She was 83 years old. At the time, the media, however, reported her age as 75, since she herself always claimed to have been born in 1936. 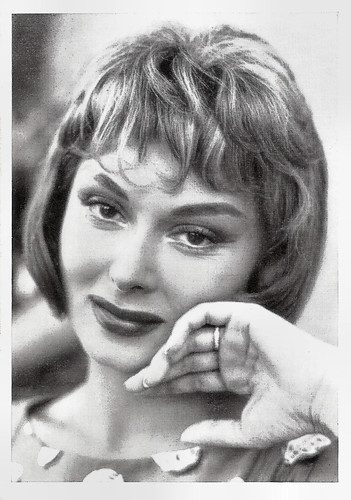 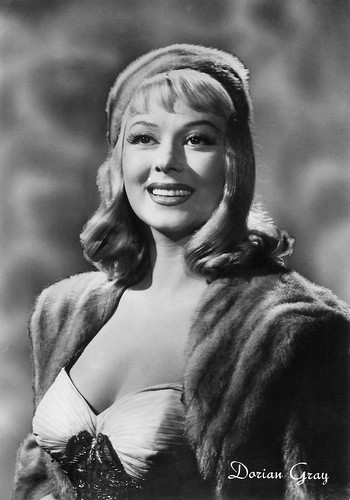 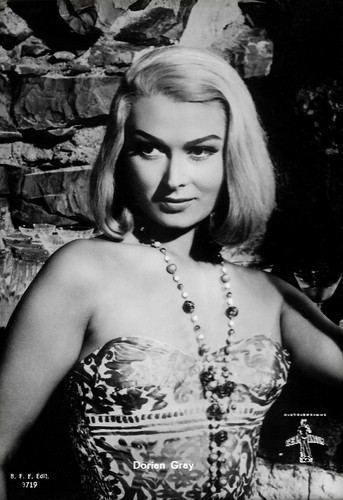 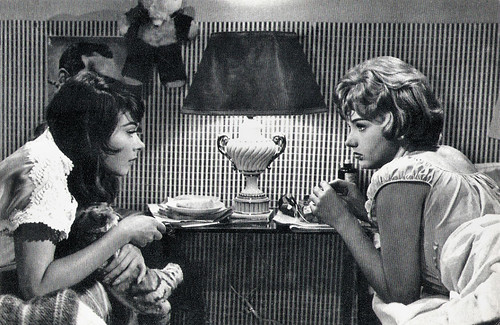 Romanian postcard by Casa Filmului Acin. Photo: Dorian Gray and Sylva Koscina in Le sorprese dell'amore/Surprise of Love (Luigi Comencini, 1959). At the flip side of the card the actress with Koscina is mistakenly identified as Anna-Maria Ferrero. 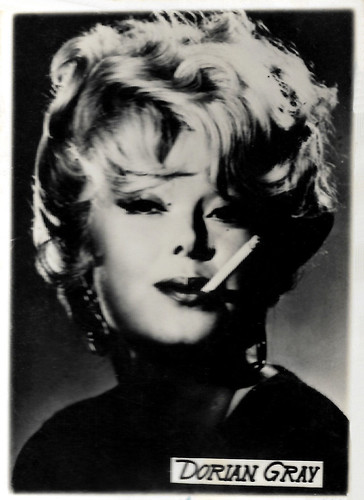 What a tragic story. I'll have to watch La Notte again and look for her.