German actor and writer Gerd Briese (1897-1957) experienced a brief film career in the silent cinema of the 1920s. 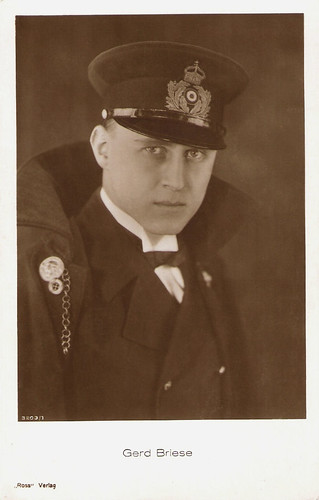 He started acting, as many did, on the stage. He made his film debut featuring in Rosenmontag/Rose Monday (Rudolf Meinert, 1924).

After that, he would play mostly supporting characters in many popular German films such as Reveille, das grosse Wecken/Reveille (Fritz Kaufmann, 1925) with Werner Krauss, which Briese also co-wrote, and Funkzauber/Radio Charm (Richard Oswald, 1927) starring Werner Krauss and Fern Andra.

In the next years he appeared in well-known films like the war drama U 9 Weddigen/U-boat 9 (Heinz Paul, 1927) opposite Ernst Hoffmann as two brothers who are both submarine officers, Lützows wilde verwegene Jagd/Lützow's Game Hunt (Richard Oswald, 1927), Walpurgisnacht/Walpurgis Night (James Bauer, 1927) with Vivian Gibson, and as a police officer in Meineid/Perjury (Georg Jacoby, 1929) featuring La Jana. 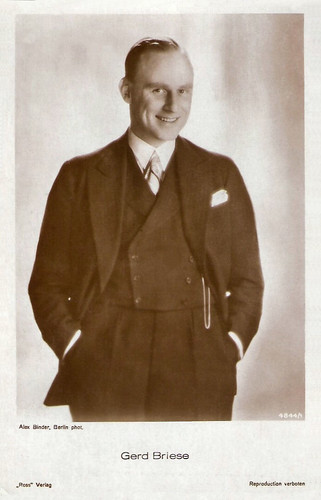 
In 1928, Gerd Briese would play in a melodrama with a gay subtext, Geschlecht in Fesseln: die Sexualnot der Gefangenen/Sex in Chains (Wilhelm Dieterle aka William Dieterle, 1928) starring Wilhelm Dieterle himself.

It’s the story of a young man who is convicted of manslaughter and sentenced to a term in prison, where he forms a close relationship with his cellmate and upon his release his wife is concerned as to how prison has changed the man she married.

After the introduction of the sound film Gerd Briese made only one talkie, Der Sittenrichter/The Customs Judge (Carl Heinz Wolff, 1929) with Erna Morena.

After that he returned to the theatre. From 1948 to 1954 he was the director of the Oldenburgisches Staatstheater.

His only film after the war was the thriller Es geschah am 20. Juli/It Happened on the 20th of July (G. W. Pabst, 1955), about the plot to assassinate Adolf Hitler.

Gerd Briese then retired and died in 1957, in Berlin. 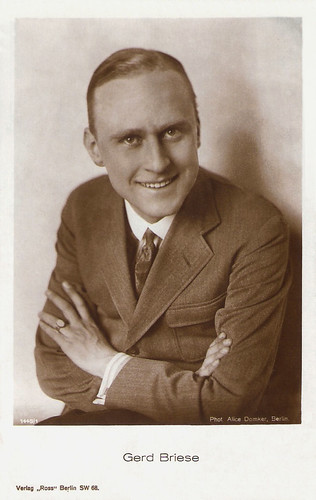