Charismatic multitalent Toni Sailer (1935-2009) was a legendary Austrian alpine ski racer, one of the best the sport has ever produced. The ‘Black Blitz from Kitz’ appeared as an actor and singer in several films and TV series. He was a national hero and matinee idol rolled into one.

Anton Engelbert ‘Toni’ Sailer (pronounced SIGH-ler) was born in Kitzbühel, in the Tyrolean Alps, in 1935. He was skiing since he was 2 years old. The son of a glass shop owner, he became a licensed glazier and plumber and worked in the shop except in winter, when he trained four hours a day.

His first skiing victory came when he was 11. The prize was two sausages. Skiing ran through Sailer’s family. His younger brother, Rudi, later ran Sailer’s ski school. Their uncle Sepp was a ski instructor for 55 years.

Barely out of his teens, he became the first skier at the Winter Olympics to win all three alpine skiing events at the 1956 Winter Olympics in Cortina d'Ampezzo, Italy. He took gold in the downhill, slalom, and giant slalom, and won them all by large margins. He was just the fifth athlete to win three gold medals in the same Olympic games.

Handsome and dashing, he was quickly nicknamed the ‘Black Blitz from Kitz’ (because of his hometown and the black suits he often wore). Sailer was a multitalent and a thinker, who always tried to improve his skiing technique. He was a huge youth idol and Sailer’s Olympic fame was credited with bringing publicity and tourism to Kitzbühel.

Toni Sailer retired from competition in 1959, because he couldn’t combine his commercial activities with his amateur status as a ski-champion.

From 1958 till 1971, he appeared in some 20 dozen of films. He followed acting classes at the film school in Berlin. His film debut was the romance Ein Stück vom Himmel/A Piece of Heaven (Rudolf Jugert, 1958) with Ingrid Andree.

In the Heimatfilm Der schwarze Blitz/The Black Blitz (Hans Grimm, 1958) he played a skier who is accused of stealing his rival's wax and causing his rival's training injuries by moving one of the gates on the downhill race course.

On stage he played the lead in Death of a Salesman, the classic play by Arthur Miller. He also performed as a Schlager singer and he released 18 popular records. Some of his songs were even hits in Japan, where he also made a film.

In Italy he appeared in the western Sansone e il tesoro degli Incas/Lost Treasure of the Incas (Piero Pierotti, 1964). In the TV film Das Blaue vom Himmel/The Blue from the Sky (Wolfgang Schleif, 1964) he co-starred with the legendary Ufa star Zarah Leander.

Most of his films were mere showcases for his ski talent, but Ski Fever (Curt Siodmak, 1966), co-starring Claudia Martin, daughter of Dean Martin, was miraculously nominated for a Golden Globe. 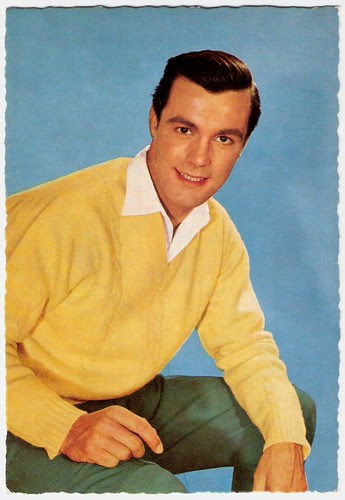 There Where the Hills Are

In 1965, Toni Sailer retired from the film and show business and moved to Canada.

Some years later he returned to Austria and started the clothing firm Sailer Sports. He ran a well-known ski school for children and served as an international skiing official.

From 1972 till 1976, he was chief trainer and technical director of the Austrian Skiing Association (ÖSV), which produced champion skiers like Franz Klammer and Annemarie Moser-Pröll. For his contribution to the Olympic Movement, the International Olympic Committee awarded him the Olympic Order in 1985.

Occasionally, he was noted for appearing in TV series like Die Leute von St. Benedikt/The People of Saint Benedikt (1992) or such made for TV films as Da wo die Berge sind/There Where the Hills Are (Kurt Ockermueller, 2000).

His last appearance for the camera was in the popular TV series SOKO Kitzbühel (2003). In 2004, he announced this candidacy for Mayor of his hometown Kitzbühel, but he withdrew some weeks later, claiming he had not expected it to be a fulltime job.

Toni Sailer married Gaby Rummeny in 1976 in Vancouver; she died of cancer in 2000. His second marriage, to Hedwig Fischer, lasted from 2006 until his death.

It was announced in January 2008 that Toni Sailer had laryngeal cancer, for which he had been undergoing chemotheraphy in the preceding months. He died of cancer in Innsbruck in 2009, aged 73. He had a son, Florian with Gaby Rummeny. His death was front page news for all Austrian newspapers. They named their national hero an example for many generations.