Colourful French singer, composer and author René-Louis Lafforgue (1928-1967) was also a well-known actor in film, theatre and television. Only 39, the popular singer-songwriter died in a car crash on the road from Albi to Castres. 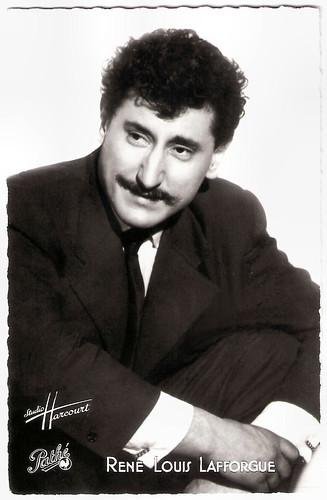 René-Louis Lafforgue was born in San Sebastian, Spain in 1928 in a family of anarchist activists of Basque origin. During the Spanish civil war, his family went in exile in France.

In WWII, he participated in the French Resistance with his brother Sylvain. In 1944, the 16-years old Sylvain was killed fighting for freedom.

After the war, René Louis did several jobs, and finally became a singer-songwriter. He appeared in the shows of Georges Brassens, and performed with him at the Olympia.

In 1948, stage director Charles Dullin hired him as an actor. The following year, he toured around Europe with the mime artist Marcel Marceau.

He made his film debut in a bit part in Sous le ciel de Paris/Under the sky of Paris (Julien Duvivier, 1951) with Brigitte Auber. With his curls and small moustache he was very recognizable.

In 1954, he won the Grand Prix of the French Chanson in Deauville, which marked the beginning of his fame. Lafforgue wrote and performed such popular songs as Julie la Rousse (1956) and Poseur de rails (Platelayer) (1957).

He sang his songs in films like Bonjour sourire!/Hello smile! (Claude Sautet, 1956) and the comedy Julie la rousse/Julie the Redhead (Claude Boissol, 1959), which was based on his hit song. 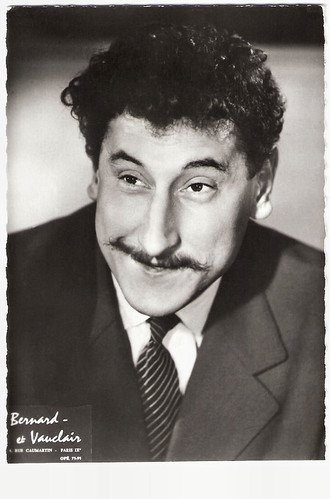 The Lovers of Teruel

Two years later he starred again in the musical Les amants de Teruel/The Lovers of Teruel (Raymond Rouleau, 1962), opposite Ludmilla Tchérina. He was also the co-author of this special film.

Michael Smith at IMDb: “The Lovers of Teruel is the best film I have ever seen. Saw it about 15 times. It is the kind of film one can see over and over - like a great opera. Every frame is perfectly composed. The first time I saw it, 44 years ago, I sat through it twice because of the music by Mikos Theodorakis. Great acting from the entire cast. Great story - emotionally wrenching.”

In 1962, Lafforgue created the cabaret ‘L'École buissonnière’ in Paris, where young talents as Guy Bedos, Paul Préboist and Pierre Louki performed. The cabaret in Saint-Germain de Prez became a favourite venue for anarchists and pacifists, for whom he hosted many festivals.

He continued to appear in films, such as in the horror comedy La grande frousse/The Big Scare (Jean-Pierre Mocky, 1964) with Bourvil, and in La communale/Public School (Jean L'Hôte, 1965) with Robert Dhéry.

His last screen appearance was in the Canadian TV series L'éventail de Séville/The range of Seville (René Wheeler, Paul-Jacques Bonzon, 1968). During the production of this series, in 1967, René-Louis Lafforgue was killed in a car accident on highway 118, between Albi and Castres. He was only 39 years.

After his death, the cabaret L'École buissonnière was managed by his wife, Claudie.