Last Monday, 4 May 2014, Soviet actress Tatyana Samoylova died. She was called 'the Russian Audrey Hepburn'. Samoylova is best known for her title role in Anna Karenina (Aleksandr Zarkhi, 1967), based on the famous novel by Leo Tolstoy. Ten years earlier, she had had her breakthrough with Letyat zhuravli/The Cranes Are Flying (Mikhail Kalatozov, 1957), which won the Golden Palm at the Cannes Film Festival of 1958 - the first Russian film ever to do so. Tatyana Samoylova was 80. 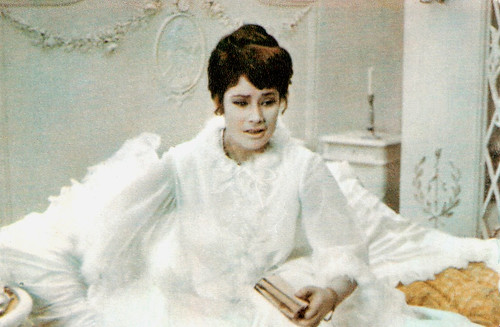 Russian postcard by Izdanije Byuro Propogandy Sovietskogo Kinoiskusstva, no. A 08345, 1969. This postcard was printed in an edition of 500,000 cards. Retail price was 6 kop. Photo: publicity still for Anna Karenina (Aleksandr Zarkhi, 1967).

The Cranes Are Flying

Young Samoylova studied music under the tutelage of her mother. During the Second World War, she escaped from the siege of Leningrad with her parents, and moved to Moscow. There she studied ballet and graduated from the Ballet School of Stanislavsky Theatre.

She was invited by Maya Plisetskaya to join the ballet school of Bolshoi Theatre, but she chose to be a dramatic actress. From 1953-1956 she studied at Shchukin Theatrical School, then at State Institute of Theatrical Art (GITIS), graduating in 1962, as actress. While a student, Samojlova made her film debut in Meksikanets/The Mexican (Vladimir Kaplunovskiy, 1955) with Daniil Sagal.

Samoylova shot to fame with the leading role as Veronika in Letyat zhuravli/The Cranes Are Flying (Mikhail Kalatozov, 1957) opposite Aleksey Batalov as Boris. The film tells a love story set during the early years of World War II. In spite of the initial cold reception by the Soviet officialdom, the film was loved by public in Russia and internationally. It became the first and only Russian film to be awarded the Golden Palm at the Cannes Film Festival.

Samoylova won a Special Mention at Cannes and was nominated for Best Foreign Actress BAFTA Film Award in 1959. She received many offers internationally, and was invited to work in Hollywood, but the Soviet government forced her to decline any jobs outside the Soviet Union.

In 1958, she made her stage debut at the Vakhtangov Theater in Moscow. She also appeared in another film by Kalatazov, Neotpravlennoye pismo/The Letter That Was Never Sent (Mikhail Kalatozov, 1959) with Evgeniy Urbanskiy.


During the 1960s, Tatyana Samoylova's career stagnated due to overall stagnation in the USSR under Leonid Brezhnev.

In 1960 she lost her job with Mayakovsky Theatre in Moscow, and was practically unemployed for several years.

However, she did co-star in the Italian-Russian war film Italiani brava gente/Attack and Retreat (Giuseppe De Santis, 1964) with Arthur Kennedy. A chronicle of the unheralded and unsuccessful invasion of the Soviet Union by the Italian army during World War II.

Her next success came with the title role in Anna Karenina (Aleksandr Zarkhi, 1967), an adaptation of the eponymous novel by Leo Tolstoy. Samoylova starred as Anna Karenina opposite her ex-husband Vasili Lanovoy as Count Vronsky.

Dan Pavlides at AllMovie: "After several previous attempts by foreign directors who miss the mark, this Russian film version of Leo Tolstoy's classic novel Anna Karenina most accurately follows the Tolstoy novel and remains superior to all other versions to date."

During the 1980s and 1990s, Tatyana Samoylova had a lengthy pause in her film career. She made a comeback in several TV series in the 2000s.

Samojlova was designated People's Actress of Russia (1993). In 2007 she was awarded with a Lifetime Achievement Award at the 29th Moscow International Film Festival. 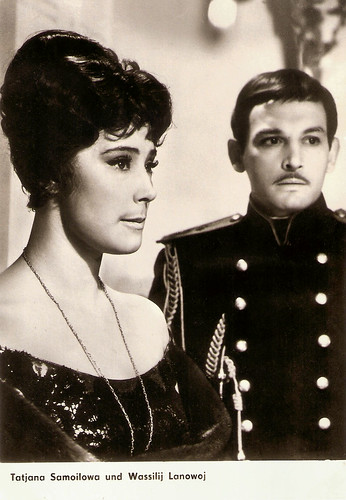 She was so beautiful and talented. It is a shame she was not allowed to work in the West.

Thanks. I am gonna see The Cranes are Flying on DVD this week.