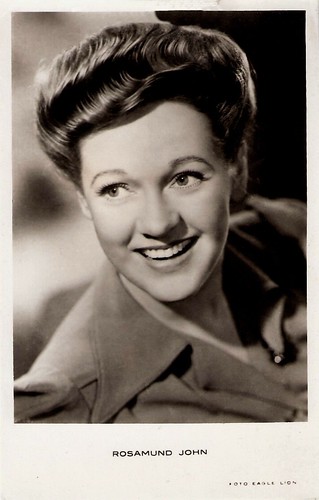 
Rosamund John was born Nora Rosamund Jones in Tottenham in North London in 1913. She also grew up in Tottenham and was educated at the Tottenham Drapers' College. Then she studied at the Embassy School of Acting.

After a year in France at the age of 19, she returned to London and was introduced by a former history teacher to the actor-director Milton Rosmer, who cast her in small stage roles.

Billed as Rosamund Jones, she made her film debut as a Scottish girl in his The Secret of the Loch (Milton Rosmer,1934). The film starred Seymour Hicks as a scientist out to prove the existence of the Loch Ness Monster.

Two years later, she made her first appearance on the West End stage in Anthony and Cleopatra. Spotted by the legendary impresario C.B. Cochran she went on to appear in the revue Home and Beauty. In 1940 she starred opposite Robert Donat in G.B. Shaw's Devil’s Disciple at the Adelphi Theatre.

After a screen test, Leslie Howard gave John a leading role in The First of the Few (Leslie Howard, 1942). In his 1998 obituary of John in The Independent, Tom Vallance writes: “As the understanding wife of the Spitfire designer R.J. Mitchell, John projected an extremely English combination of reticence, loyalty and gentle determination, and the film was a big success.“

Rosamund John became a popular film and stage actress who was known for playing gentle mannered women. In the comedy Tawny Pipit (Bernard Miles, 1944), she plays a nurse who joins a vicar and convalescing pilot to save rare birds nesting near an English village and ensure that they can hatch undisturbed in the middle of a war.

Another success was the outstanding film about life on a British bomber station, The Way to the Stars (Anthony Asquith, 1945). She played ‘Toddy’, the compassionate hotel landlady who loses both her husband, RAF pilot Michael Redgrave, and the American airman she later befriends.

Tom Vallance describes Rosamund John as “one of Britain's most popular film actresses of the Forties, Rosamund John was voted second only to Margaret Lockwood as the country's favourite British female star in 1944” and as “one of the most interesting of the well-bred heroines who dominated the British screen of that time.” 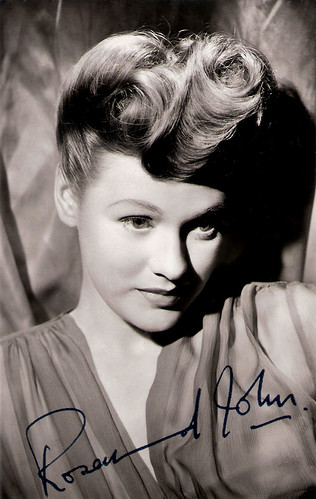 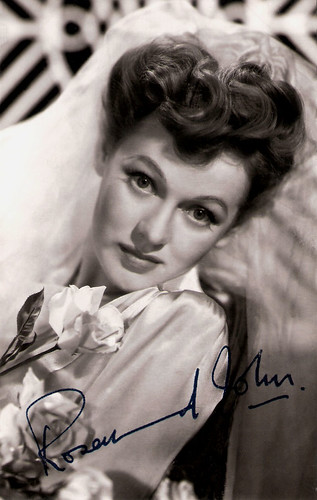 
After the war, Rosamund John starred in Green for Danger (Sidney Gilliatt, 1946), an inventive murder mystery set in a hospital operating theatre with Alastair Sim as the eccentric police inspector.

Bruce Eder at AllMovie: “the movie's casting, plotting, and execution served as a prime example of how British studios were going to compete with their higher-budgeted American rivals in the years after the war: by making movies that were cleverer and more offbeat than anything coming out of America”.

Green for Danger was again a success, but it would be the last of her major films. The psychological thriller The Upturned Glass (1947) was stolen by its star and co-producer James Mason, and, Roy Boulting's Fame is the Spur (Lawrence Huntington, 1947) was not a popular success.

A film about the effect of warring parents on a child, No Place for Jennifer (Henry Cass, 1949), was a big success for the child star Janette Scott, after which John made only one more major film, Street Corner (Muriel Box, 1953), in which she and Anne Crawford portrayed two policewomen.

Rosamund John was intensely political. In 1949 she was nominated to be the Actors Representative on the Working Party on Film Production Costs and for many years she was a leading figure with Equity, the British actors trade union.

In 1950, she married young naval officer and later Labour MP John Silkin. In the following years, John often attended the House of Commons to hear her husband speak. In the 1970s, Silkin became Minister for Agriculture, Fisheries and Food. It was a long and happy marriage which ended with her husband’s death in 1987.

John's final film was the B-film Operation Murder (Ernest Morris, 1956), but she had virtually abandoned her acting career for politics and for marriage. Later she made several television appearances including a guest cameo in the TV series Crimes of Passion (1971). 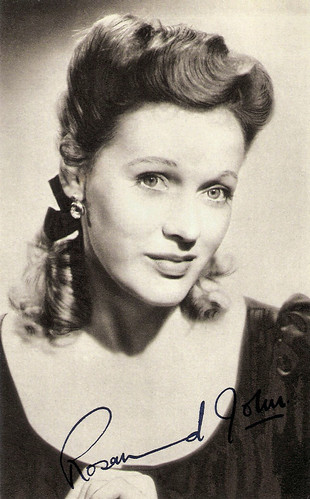