Beautiful German actress Sybille Schmitz (1909-1955) started her career in the era of the silent cinema. With her typical face and her relaxed, slightly mysterious way of playing, she became a prominent Ufa star during the Third Reich. After the war she was beset by drug abuse and depression and at 45, she committed suicide. 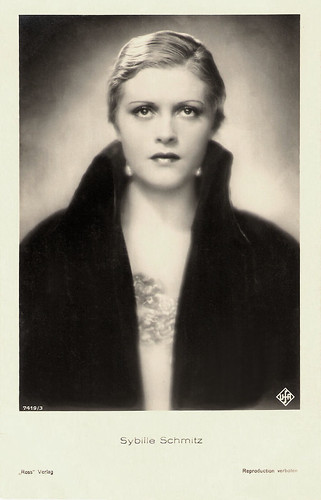 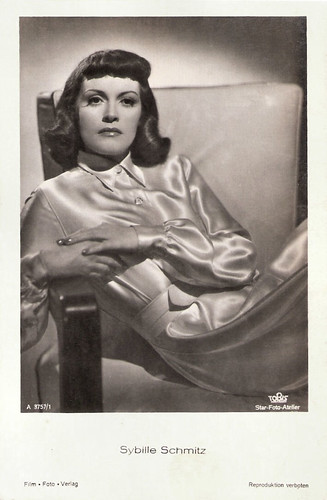 Diary of a Lost Girl


Sybille Maria Christina Schmitz was born in Düren, in the West of Germany, in 1909. She was the daughter of a confectioner.

Schmitz attended an acting school in Köln (Cologne) and got her first engagement at Max Reinhardt's Deutsches Theater in Berlin in 1927. Reinhardt was the most famous stage director of the Weimar republic.

Only one year later, she made her film debut with the SPD party film Freie Fahrt/Free Ride (1928). Her role as a mother who dies of premature birth, attracted her first attention from the critics.

Her other early films include Tagebuch einer Verlorenen/Diary of a Lost Girl (Georg Wilhelm Pabst, 1929) starring Louise Brooks, and Vampyr/Castle of Doom (Carl Theodor Dreyer, 1932) as the haunting beauty Leone. Her beautiful face with the shy look, enormous brooding eyes and sad mouth had a touch of strangeness, loneliness.

In the following years she often played a mysterious and unapproachable woman. She played her first leading role in the SciFi film F.P.1 antwortet nicht/F.P.1 Doesn't Answer (Karl Hartl, 1932) opposite Hans Albers.

Schmitz then established herself as a prominent Ufa star with Der Herr der Welt/Master of the World (Harry Piel, 1934), Abschiedswalzer/Farewell Waltz (Géza von Bolváry, 1934), the Oscar Wilde adaptation Ein idealer Gatte/An Ideal Husband (Herbert Selpin, 1935) with Brigitte Helm, and the horror thriller Fährmann Maria/Death and the Maiden (Frank Wisbar, 1936), in which she played a ferrywoman attempting to save a doomed youth from Death.

Schmitz and the alcoholic director Frank Wisbar lived some years together. Nazi minister of propaganda, Joseph Goebbels, disliked her and thought her 'too foreign'. Schmitz suffered blacklisting by the regime for a while but stage director Gustaf Gründgens persuaded Goebbels to allow her to star in Der Tanz auf dem Vulkan/Dancing on the Volcano (Hans Steinhoff, 1938), one of the many circus melodramas made during the Nazi regime.

She then had roles in Die Frau ohne Vergangenheit/The Mysterious Woman (Nunzio Malasomma, 1939), Trenck, der Pandur (Herbert Selpin, 1940) with Hans Albers, and Titanic (Herbert Selpin, 1943), a technically amazing – for 1943 – film version of the sinking of the British luxury liner in 1912.

According to Hans J. Wollstein at All Movie the film “was promptly banned by Goebbels for being too depressing and not anti-British enough. The drama survives, however, and Schmitz once again offers a standout performance.” 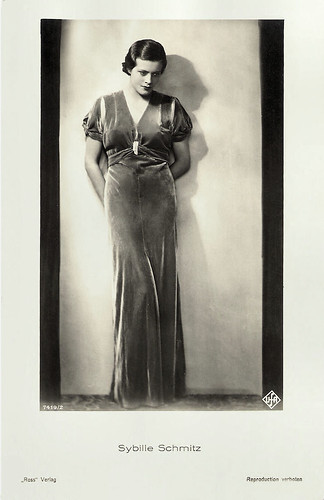 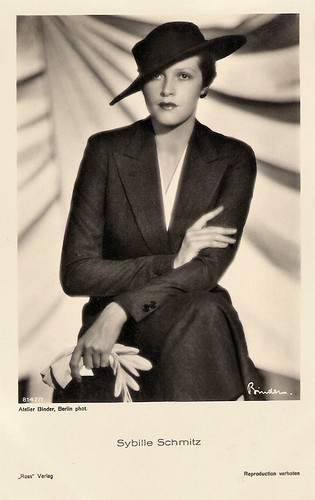 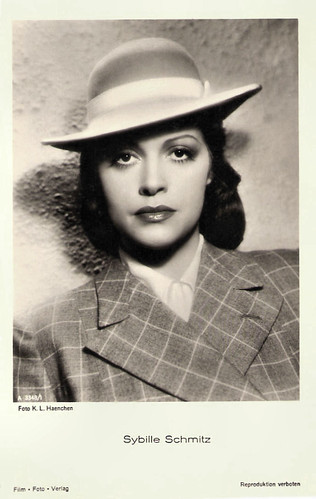 
After World War II, Sybille Schmitz was shunned by the German film community for continuously working during the Third Reich, and it became difficult for her to land roles.

She appeared in supporting roles in such films as Zwischen gestern und morgen/Between Yesterday and Tomorrow (Harald Braun, 1947) starring Hildegard Knef, Sensation im Savoy (Eduard von Borsody, 1950), and Illusion in Moll/Illusion in a Minor Key (Rudolf Jugert, 1952), but was beset with drug abuse, depression, several suicide attempts and the committal to a psychiatric clinic.

In 1940 she had married author Harald G. Petersson who wrote many of her screenplays and later would write the screenplays for the Winnetou films. Schmitz was bisexual and had a relationship with acting teacher Beate von Molo. Petersson could not cope with his wife’s bisexuality and her ever-increasing consumption of alcohol, so they went their separate ways.

Ironically, the last film she made less than two years before taking her own life, Das Haus an der Küste/The House on the Coast (Bosko Kosanovic, 1953 - now considered a lost film), had Sybille's character committing suicide as a last act of desperation. In 1955, Sybille Schmitz took a fatal overdose of sleeping pills in Munich. She was 45 years old. Schmitz left a note, not blaming anyone in particular for her death and stating that she simply grew weary of her life.

One year later, an action was brought against her doctor, Dr. Ursula Moritz, for improper medical treatment. 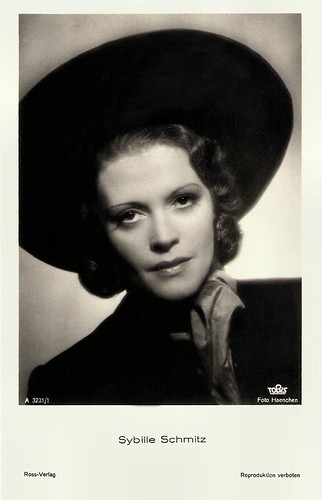 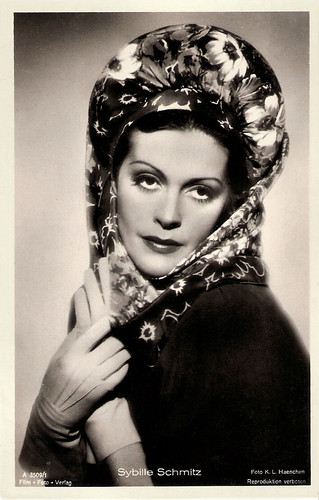 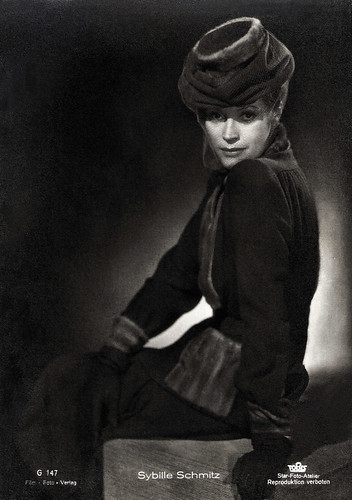 What a striking looking woman. What a sad and tragic end.