Il Cinema Ritrovato film festival (28 June - 5 July) in Bologna celebrates the 50th anniversary of Österreichisches Filmmuseum with a screening of the silent classic The Merry Widow (Erich von Stroheim, 1925) with Mae Murray and John Gilbert. As the sadistic, monocled Prussian officer in both American and French films, Austrian-born Erich von Stroheim (1885–1957) became ‘The Man You Love to Hate’. But maybe he is best known as one of the greatest and influential directors of the silent era, known for his extravaganza and the uncompromising accuracy of detail in his monumental films. 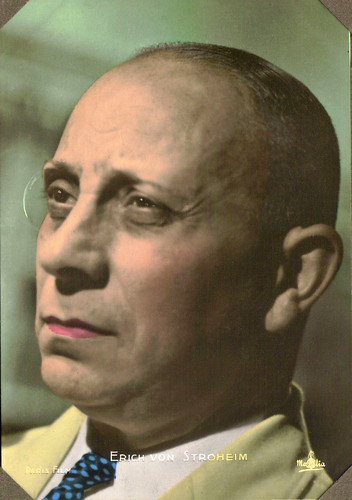 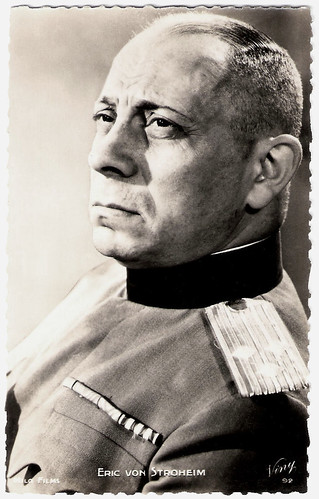 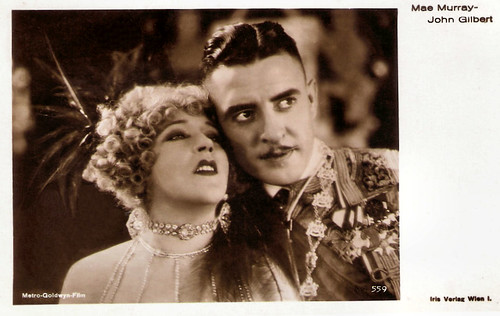 Erich von Stroheim's most recent biographers, such as Richard Koszarski, say that he was born in Austria-Hungary (now Austria) in 1885 as Erich Oswald Stroheim.
He was the son of Benno Stroheim, a middle-class hat-maker, and Johanna Bondy, both of whom were practicing Jews. Stroheim emigrated to America at the end of 1909. On arrival at Ellis Island he claimed to be Count Erich Oswald Hans Carl Maria von Stroheim und Nordenwall, the son of Austrian nobility like the characters he later played in his films. However, both Billy Wilder and Stroheim's agent Paul Kohner claimed that he spoke with a decidedly lower-class Austrian accent.
In 1912 while working at a tavern he met his first wife, Margaret Knox, and moved in with her. Knox acted as a sort of mentor to Von Stroheim, teaching him language and literature and encouraging him to write. Under Knox's tutelage, he wrote a novella entitled In the Morning, with themes that anticipated his films: corrupt aristocracy and innocence debased. The couple married in 1913, but money woes drove Von Stroheim to deep depressions and terrible temper tantrums, and in 1914 Knox filed for divorce.
By then Von Stroheim was working in Hollywood. He began his cinema career in bit-parts and as a consultant on German culture and fashion. His first film was The Country Boy (Frederick A. Thomson, 1915) in which he was an uncredited diner in a restaurant.
His first credited role came in Old Heidelberg (John Emerson, 1915) starring Wallace Reed and Dorothy Gish. He began working with D. W. Griffith, taking uncredited roles in Intolerance (1916). Additionally, Von Stroheim acted as one of the many assistant directors on Intolerance, a film remembered in part for its huge cast of extras.
Later, he played the sneering German with the short Prussian military hairstyle in such films as Sylvia of the Secret Service (George Fitzmaurice, 1917) and The Hun Within (Chester Whitey, 1918) with Dorothy Gish.
In the war drama The Heart of Humanity (Allen Holubar, 1918), he tore the buttons from a nurse's uniform with his teeth, and when disturbed by a crying baby, threw it out of a window. Following the end of World War I, Von Stroheim turned to writing. 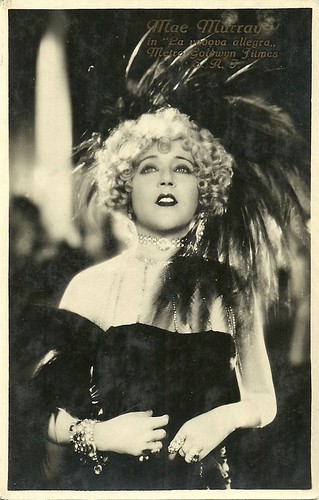 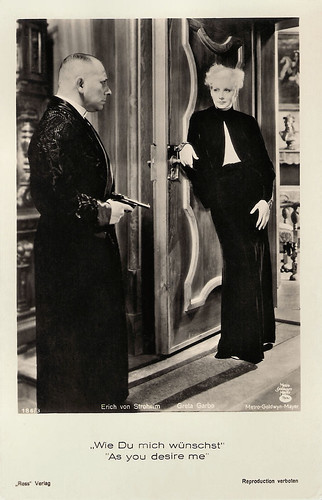 German postcard by Ross Verlag, no. 186/3. Photo: Metro-Goldwyn-Mayer. Publicity still for As You Desire me (George Fitzmaurice, 1932) with Erich von Stroheim and Greta Garbo. 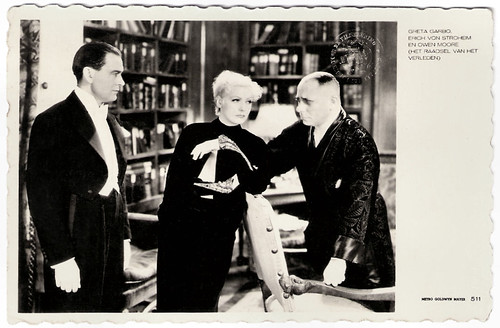 Dutch postcard, no. 511. Photo: Metro-Goldwyn-Mayer. Publicity still for As You Desire me (George Fitzmaurice, 1932) with Owen Moore, Greta Garbo and Erich von Stroheim.

A Dictatorial And Demanding Director

In 1919, Erich von Strohem directed his own script for Blind Husbands (1919), and also starred in the film. As a director, Von Stroheim was known to be dictatorial and demanding, often antagonizing his actors. He is considered one of the greatest directors of the silent era, with his both cynical and romantic views of human nature.
His next directorial efforts were the lost film The Devil's Pass Key (1919) and Foolish Wives (1922), in which he also starred. Studio publicity for Foolish Wives claimed that it was the first film to cost one million dollars. ‘Von’ translated sexual subjects in a witty and ostentatious manner, and his first films for Universal are among the most acclaimed sophisticated films of the silent era.
In 1923, Von Stroheim began work on Merry-Go-Round. He cast the American actor Norman Kerry in a part written for himself, 'Count Franz Maximilian Von Hohenegg', and newcomer Mary Philbin in the lead actress role. However studio executive Irving Thalberg fired Von Stroheim during filming and replaced him with director Rupert Julian.
He left Universal for Goldwyn Films to make Greed (1924). This monumental film is now one of Von Stroheim's best remembered works as a director. It is a detailed filming of Frank Norris’ novel McTeague, about the power of money to corrupt. The original print ran for an astonishing 10 hours. Knowing this version was far too long, Von Stroheim cut out almost half the footage, reducing it to a six-hour version to be shown over two nights. It was still deemed too long, so Von Stroheim and director Rex Ingram edited it into a four-hour version that could be shown in two parts.
In the midst of filming, Goldwyn was bought by Marcus Loew and merged into Metro-Goldwyn-Mayer. After rejecting Von Stroheim's attempts to cut it to less than three hours, MGM removed Greed from his control and gave it to head scriptwriter June Mathis, with orders to cut it down to a manageable length. Mathis gave the print to a routine cutter, who reduced it to 2.5 hours. In what is considered one of the greatest losses in cinema history, a janitor destroyed the cut footage. The shortened release version was a box-office failure, and was angrily disowned by Von Stroheim.
Von Stroheim followed with his most commercially successful film The Merry Widow (1925) starring Mae Murray and John Gilbert, the more personal The Wedding March (1928) and the low-lost The Honeymoon (1928). Von Stroheim's unwillingness or inability to modify his artistic principles for the commercial cinema, his extreme attention to detail, his insistence on near-total artistic freedom and the resulting costs of his films led to fights with the studios.
As time went on he received fewer directing opportunities. In 1929, Von Stroheim was dismissed as the director of the film Queen Kelly after disagreements with star Gloria Swanson and producer and financier Joseph P. Kennedy over the mounting costs of the film and Von Stroheim's introduction of indecent subject matter into the film's scenario. It was followed by Walking Down Broadway, another project from which Von Stroheim was dismissed. 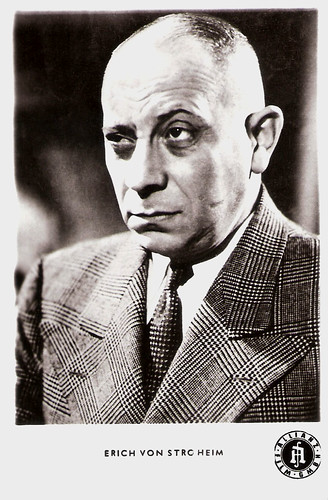 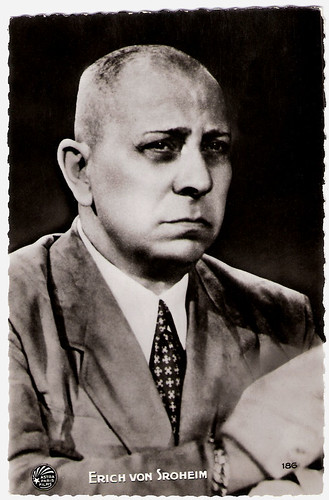 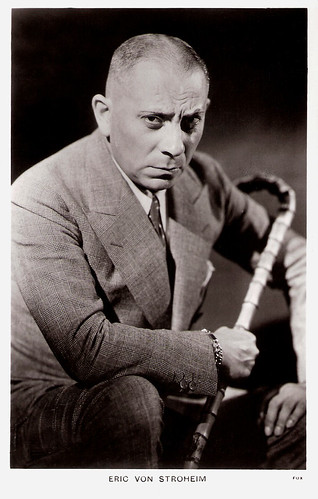 British postcard by Real Photograph, London, in the Picturegoer series, no. 20a. Photo: Fox.

After the introduction of sound film, Erich von Stroheim returned to working principally as an actor, in both American and French films.
One of his most famous roles is the prison-camp commandant Von Rauffenstein in Jean Renoir's La Grande Illusion/Grand Illusion (1937) with Jean Gabin. It is a classic anti-war film about friendship, comradeship, and human relations.
Working in France on the eve of World War II, Von Stroheim was prepared to direct the film La dame blanche from his own story and screenplay. Jean Renoir wrote the dialogue, Jacques Becker was to be assistant director and Von Stroheim himself, Louis Jouvet and Jean-Louis Barrault were to be the featured actors. The production was prevented by the outbreak of the war on 1 September 1939, and Von Stroheim returned to the United States.
There he appeared in Five Graves to Cairo (Billy Wilder, 1943). Today, he is perhaps best known as an actor for his role as Max von Mayerling in Wilder's Sunset Boulevard (Billy Wilder, 1950), co-starring Gloria Swanson. For this role, Von Stroheim was nominated for the Academy Award for Best Supporting Actor. His character states in the film that he used to be one of the three great directors of the silent era, along with D.W. Griffith and Cecil B. DeMille, and he and Swanson watch excerpts from Queen Kelly in the film. Their characters in Sunset Boulevard thus had an autobiographical basis and reflected the humiliations Von Stroheim suffered through his career.
Erich von Stroheim was married three times. His second wife was Mae Jones. Their son Erich Jr. became an assistant director. With his third wife, actress Valerie Germonprez, he had another son, Joseph Erich von Stroheim, who eventually became a sound editor. From 1939 until his death, he lived with actress Denise Vernac. She had worked for him as his secretary since 1938, and co-starred with him in several films.
Von Stroheim spent the last part of his life in France where his silent film work was much admired by artists in the French film industry. In France he acted in films, wrote several novels that were published in French, and worked on various unrealized film projects. Erich von Stroheim was awarded the Légion d'honneur shortly before his death in 1957 in Maurepas near Paris, France at the age of 71.
Erich von Stroheim is smoking in Foolish Wives (1922) to the tune of Leo Riesman's Smoke Gets In Your Eyes. Source: gregoryagogo (YouTube).
Trailer La Grande Illusion/Grand Illusion (1937). Source: Danios12345 (YouTube). 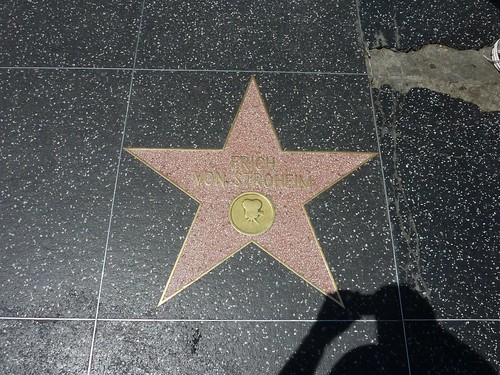