We're in Bologna, Italy, visiting Il Cinema Ritrovato film festival (28 June - 5 July). One of the sections we're following is Freda: a Master of Popular Cinema. Director Riccardo Freda (1909-1999) always consciously worked in popular genres, taking inspiration from classic literature and silent film. He was the author of some of the greatest successes of the post-war period, but was only discovered thanks to the French critics of the 1960s, and is since revered by generations of film lovers and filmmakers. Star of many of his spectacles was his wife, the Italian femme fatale Gianna Maria Canale (1927-2009). Her anatomy figured prominently in the sword-and-sandal epics and pirate adventures in which she played sultry temptresses or princesses in distress. La Canale was also a leading lady of international films of the 1950s and early 1960s. 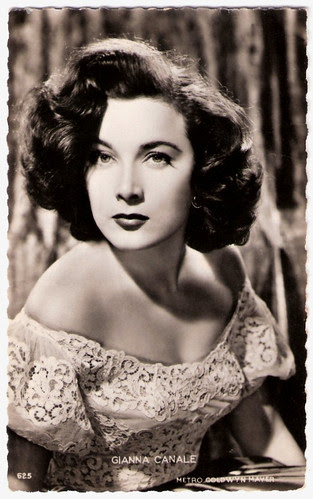 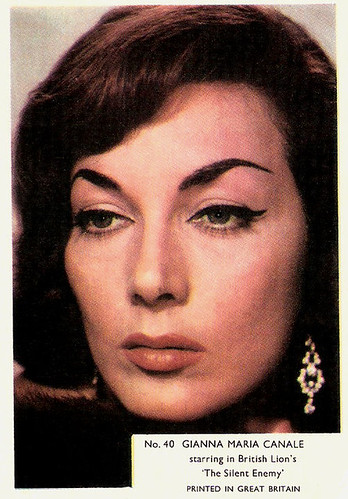 Gianna Maria Canale was born of Greek descent in Reggio Calabria, in the south of Italy, in 1927.

When she was working as a steno typist, her film career started with a small role in the film Aquila Nera/Return of the Black Eagle (Riccardo Freda, 1946) starring Rossano Brazzi.

After the beauty contest Canale received publicity in many Italian magazines who compared her sultry, dark-haired looks to those of Ava Gardner. Egyptian born director Riccardo Freda (aka Robert Hampton), who had directed her in Aquila Nera, offered her a film contract and a role opposite Vittorio Gassman in Il cavaliere misterioso/The Mysterious Cavalier (Riccardo Freda, 1948).

In this film she had a nude scene. During the shooting the director and his leading lady fell in love. Freda left his wife and he and Canale got married in Brazil. There they shot two films, Guarany (Riccardo Freda, 1948) and O Caçula do Barulho (Riccardo Freda, 1949).

Canale could not get used to the South American climate and they returned to Italy. There she was often directed by her husband in such films as Il conte Ugolino/Count Ugolino (Riccardo Freda, 1949) with Carlo Ninchi, Il figlio di d'Artagnan/The Son of d’Artagnan (Riccardo Freda, 1950) again with Ninchi, and Vedi Napoli e poi muori/See Naples and Die (Riccardo Freda, 1951).

In their Black Eagle sequel La vendetta di Aquila Nera/The Revenge of the Black Eagle (Riccardo Freda, 1951) she was now the leading lady opposite Rossano Brazzi. 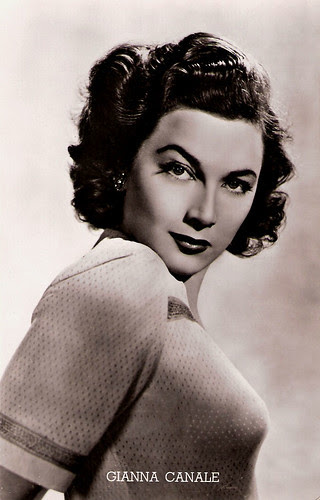 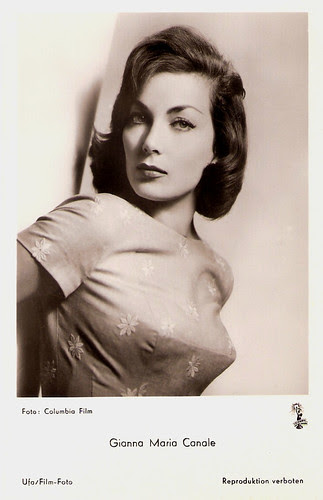 Queen of the Peplum

In Italy she starred in many Peplums or Sandaloni - sword and sandal films - including the first Hercules film Le fatiche di Ercole/Hercules (Pietro Francisi, 1958) which featured her as the Queen of the Amazons opposite bodybuilder Steve Reeves.

At AllMovie, critic Hal Erickson calls her “A practioner of the ‘enigmatic femme fatale’ school of screen performing (...) Most of Canale's film appearances were exotic to the point of self-mockery”, as witness Teodora, imperatrice di Bisanzio/Theodora Slave Empress (Riccardo Freda, 1954) and La Venere dei pirati/Queen of the Pirates (Mario Costa, 1961).

I vampiri/Evil's Commandment (1956) was her last film with Freda, and during the shooting they separated. I vampiri, the first Italian horror film of the sound era, was completed by future Italian fantasy specialist Mario Bava. In this stylish and elegant fantasy she plays Duchess Giselle du Grand who is kept alive with blood experiments.

Canale continued to appear in international films, including the biopic The Silent Enemy (William Fairchild, 1958) with Laurence Harvey as the controversial British war hero Lionel Crabb, and the thriller The Whole Truth (John Guillermin, 1958) as a temperamental Italian film star/murdered mistress of Stewart Granger.

One of the most interesting of her later films was Il boom (Vittorio de Sica, 1963), a somber comedy with Alberto Sordi that was sadly overlooked.

Gianna Maria Canale retired from the film industry in 1964. What happened then with her? Most of our sources only indicate that she became the widow of Riccardo Freda in 1999 and that Canale herself died in Florence in 2009, aged 81. 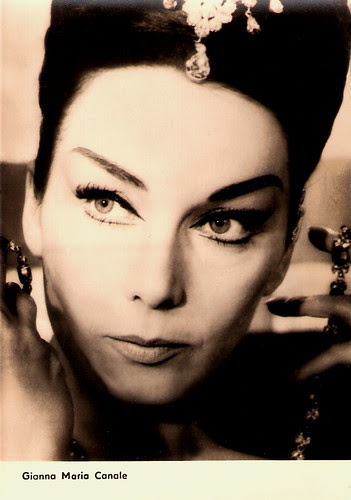