Maj-Britt Nilsson (1924-2006) was the first leading lady of the great Swedish director Ingmar Bergman. She featured in three of his films of the early 1950s. Her later film work was pale in comparison, but she had an impressive stage career. 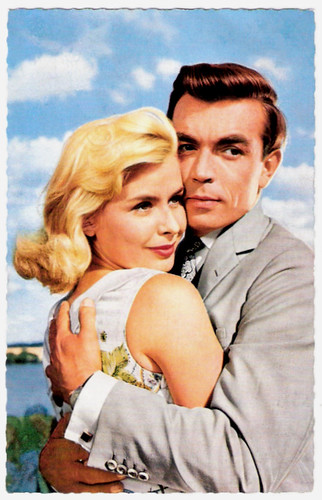 Maj-Britt Nilsson was born in Stockholm in 1924. Aged 17, Nilsson got her first uncredited screen role as a schoolgirl in Tänk, om jag gifter mig med prästen/And If I Marry the Pastor (Ivar Johansson, 1941) starring Viveca Lindfors.

Nilsson gained experience in such films as Resan bort/A Journey Away (Alf Sjöberg, 1945). A few years later, she got her first leading parts, in Gustaf Molander's comedy Det är min modell/Affairs of a Model (1946) opposite Alf Kjellin, and the dramatic Maria (Gösta Folke, 1947).

Her breakthrough came in 1948, when she and Anita Björk starred in a stage production of Jean Genet’s The Maids.

After this triumph Nilsson starred as a young wife of an adulterous orchestra player in the film Till Glädje/To Joy (1950), directed by the then 32 year old Ingmar Bergman. In his excellent obituary on Nilsson in The Guardian, Ronald Bergan wrote that the title of the film "derived from the choral movement of Ludwig von Beethoven's Ninth Symphony that ends the film on a note of hope. In it, as in many later films, Bergman focuses on the female face in close-up, and Nilsson's delicate features admirably bears the scrutiny of Gunnar Fischer's camera."

Bergman’s next film, Sommarlek/Summer Interlude (Ingmar Bergman, 1951), is generally considered as his first mature picture. For the female lead of a ballerina, he chose again the then 27-year-old Nilsson.

Ronald Bergan noted in The Guardian that this film was Bergman’s "first to create the atmosphere of nihilism and stark beauty that would become his trademark. (...) Summer Interlude dealt with adolescent love, the subject of much of Bergman's early work, and had Nilsson looking back on the idyllic summer she had spent several years earlier on an island near Stockholm with the boy she loved. But the affair comes to a tragic end when he dies in an accident. Nilsson, with the looks of a young, dark-haired Ingrid Bergman, brilliantly manages the shift from ecstatic young love to bitterness and emptiness, and then to the expression of a different kind of love."

At Alt Film Guide, Andre Soares cites Ingmar Bergman saying about Nilsson: "she could do anything. She did it instantly and delivered her lines with absolute naturalness." 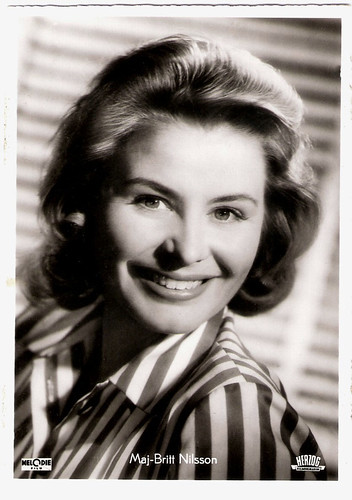 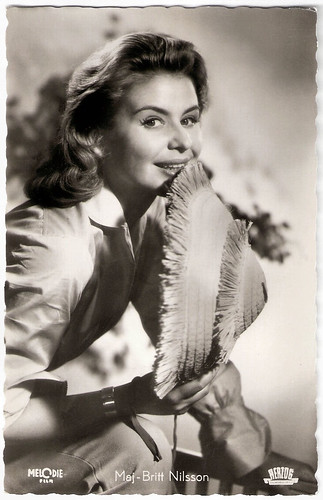 In her third and last film for Bergman, Kvinnors Väntan/Waiting Women (Ingmar Bergman, 1952), Maj-Britt Nilsson played one of four waiting sisters-in-law - Anita Björk, Eva Dahlbeck, and Aino Taube are the others.

Ronald Bergan notes that the film is “a good example of the director's concern for relations between the sexes, especially from a woman's point of view. While the women of the title wait for their husbands to join them for the summer, three of them recount decisive incidents in their married lives. Nilsson's episode has her in hospital about to go into labour, a situation she has kept from her husband.”

Receiving rave reviews for her work, it was expected that she would become a main staple of Bergman's prestigious company of players. Surprisingly she never made another film for him.

In 1951, after a brief marriage to singer and composer Anders Börje, she had married Per Gerhard, a theatre director and son of Karl Gerhard, a prominent Swedish singer.

She subsequently left the Royal Dramatic Theatre to work alongside him at Stockholm's Vasa Theatre. The couple would stay there for the next three decades. One of her stage roles was that of Maggie the Cat in a Swedish-language version of Tennessee Williams' Cat on a Hot Tin Roof.

The films she later made in her career were of far less significance than her early work with Bergman. Among the more interesting ones are the Swedish film noir Vildfåglar/Wild Birds (Alf Sjöberg, 1955) with Per Oscarsson, the Swedish-German coproduction Sommarflickan/Schwedenmädel/Swedish Girl (Håkan Bergström, Thomas Engel, 1955) opposite Karlheinz Böhm, and Hollywood director John Cromwell's last film, A Matter of Morals (1961). The film was made in English in Sweden, with Nilsson carrying on an adulterous affair with her brother-in-law (Patrick O'Neal).

Nilsson seldom strayed outside her homeland when it came to filming outside the rare occasion of the two Austrian films based on the popular trilogy by Trygve Gulbranssen about the Norwegian Björndal family, Und ewig singen die Wälder/Beyond Sing the Woods (Paul May, 1959) and Das Erbe von Björndal/The Heritage of Bjorndal (Gustav Ucicky, 1960).

Her last film appearance was in Bluff Stop (Jonas Cornell, 1977), which featured Björn Andrésen, the boy from Morte a Venezia/Death in Venice (Luchino Visconti, 1971), by then 22, in his first film after Death in Venice.

She retired completely in 1985. In the 1980s she and her husband took up residence on the French Riviera. 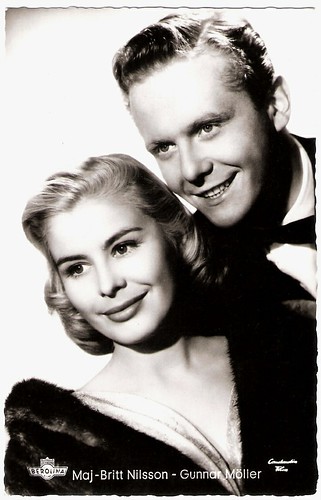 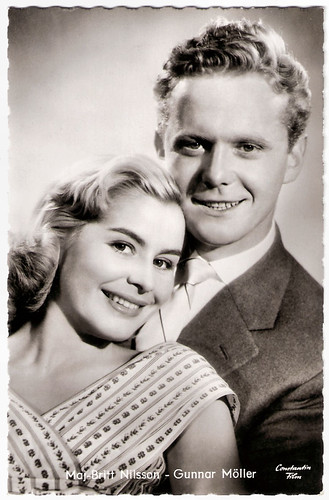