Austrian actress Tala Birell (1907–1958) was a protégé of legendary stage director Max Reinhardt and became popular in his Viennese productions. Universal signed her to star in Hollywood films and the studio built her up as a new Garbo. To no avail. During the 1940s and early 1950s she mainly worked in B-films and for TV. 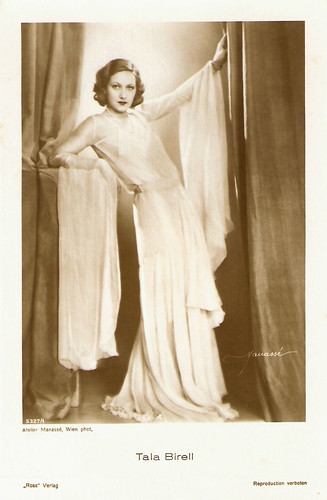 Tall and blond Tala Birell was born as Natalie Bierl in Bucharest, Romania in 1907. Her mother Stephanie Sahaydakowska, was a Polish baroness, and her father, Carl Bierl, an Austrian businessman. They were temporarily in Bucharest while he was overseeing his company there.

Nathale and her three sisters and one brother enjoyed an idyllic life, summering at the Polish estate of her aristocratic uncle. During WWI the family was in Berlin, where Nathalie studied at a private school. After the war her father died and her privileged childhood came to an end.

She dreamed of the theatre, and made her stage debut in Berlin in 1926 in The Mikado with Erik Charell.

That year, she also made her film debut credited as Thala Birell in a bit role in Man spielt nicht mit der Liebe/One Does Not Play with Love (Georg Wilhelm Pabst, 1926), starring Werner Krauss and Lili Damita. This silent German drama was an adaptation of the play On ne badine pas avec l'amour by Alfred de Musset, and is now considered to be a lost film.

She was spotted by the famous stage producer Max Reinhardt, who put her in his production of Es Liegt in Der Luft (It’s in the Air, 1927) starring Marlene Dietrich. Birell was an understudy for Dietrich’s role until Dietrich left the show. Tala then became the star and took the show to Vienna. As a Reinhardt protégé, her reputation grew.

Then, a Universal executive signed her to come to Hollywood for a part in Liebe auf Befehl (Ernst L. Frank, Johannes Riemann, 1931), the German version of The Boudoir Diplomat (Malcolm St. Clair, 1930) with Betty Compson.

She stayed in Hollywood and Universal gave her a leading role in Doomed Battalion (Cyril Gardner, 1932), the American version of a German mountain film starring Luis Trenker. It was a critical and artistic success and was voted one of the ten best films of 1932 by the New York Times. Next she appeared as a European countess in Nagana (Ernst L. Frank, 1933) opposite Melvyn Douglas.

The studio promoted her as a second Garbo, due to her glamorous, a bit cold beauty. But just as with another European import Anna Sten, the publicity did not work. Garbo was unique.

In the following years Tirell only played small roles for Columbia Pictures in films like The Captain Hates the Sea (Lewis Milestone, 1934). She got the female lead in B-films like the aviation-themed science-fiction film Air Hawks (Albert Rogell, 1935). 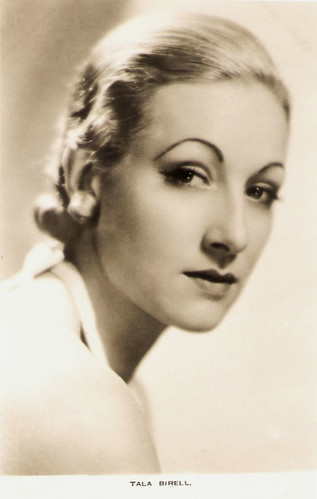 In 1940 Tala Birell appeared onstage in My Dear Children at the Belasco Theatre in New York City.
During the 1940s she continued to appear in B-films like the action film Seven Miles from Alcatraz (Edward Dmytryk, 1942) with Bonita Granville, and One Dangerous Night (Michael Gordon, 1943), the ninth Lone Wolf film featuring Warren William as former jewel thief and reformed detective Michael Lanyard alias The Lone Wolf.

Her most often-seen performance is her brief role as the governess to the Empress's very young son in The Song of Bernadette (Henry King, 1943), who takes what is believed to be miraculous water from the grotto.

Her roles got smaller and she started to work for ‘poverty row’ studios as PRC and Monogram Pictures. For PRC she played in the Science Fiction/Horror movie The Monster Maker (Sam Newfield, 1944) starring J. Carrol Naish, and for Columbia she played in a film of another popular series, the mystery film noir The Power of the Whistler (Lew Landers, 1945) based on the radio drama The Whistler.

Several of her characters were linked with the anti-Nazi war effort: a courageous Russian in China (John Farrow, 1943), Madame Bouchard of the French Resistance in Till We Meet Again (Frank Borzage, 1944), the Nazi Doctor Elise Bork in the serial Jungle Queen (Lewis D. Collins, Ray Taylor, 1945), and Yvette Aubert, the French adventurer and entertainer in Women in the Night (William Rowland, 1948), who plays along with an extreme Nazi unit in Shanghai until she saves the world from a weapon of mass destruction with the sacrifice of her life.

After the war, she also had a small part in the biopic Song of Love (Clarence Brown, 1947) starring Katharine Hepburn as Clara Wieck.

Tirell returned to Germany and took up residence with her mother who was by then living in Munich. In 1951 she was appointed by the Special Service Headquarters of the U.S. Army in Nuremberg to organize theatrical productions in Germany, France, and Austria for the G.I.s. stationed there. Her title was Field Entertainment Supervisor, and sometimes took part herself in shows at military clubs in Munich and Nuremberg, and Orléans (France).

She later moved to Berlin with the title Command Entertainment Director and put on shows for U.S. troops and refugees from Eastern Europe. She retired in 1957 for health reasons.

Her final on-camera appearance was as the Queen of Cygni in an episode of the television series Flash Gordon (1955), based on the characters of the Alex Raymond-created comic strip.

Tala Birell died in 1958 in Landstuhl, Germany, aged 50. She is buried in the Bavarian village Marquartstein in a family tomb. 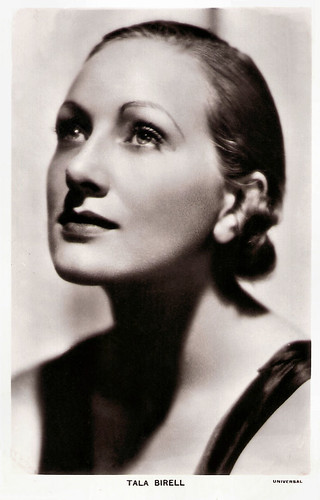 British postcard in the Picturegoer Series, no. 774. Photo: Universal.