On 27 March, Italian film actor Rik Battaglia (1927-2015) passed away. He made nearly 100 film appearances between 1954 and 1999. Battaglia played the bad guy in dozens of Peplums, Euro-Westerns and war films. In Germany he became notorious as ‘The Man Who Shot Winnetou.‘ 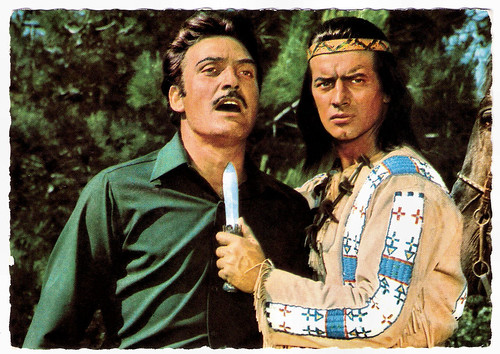 
Rik Battaglia was born as Caterino Bertaglia in Corbola, Italy, in 1927 (IMDb) or 1930 (Wikipedia). Battaglia never met his father and has seen his mother only rarely. He was raised by his grandmother.

At 17, he was working as a sailor on a freighter between Corfu and the Black Sea. Years later, he was discovered by director Mario Soldati when he worked as a bartender in a Milanese restaurant. Producer Carlo Ponti hired him on the spot.

In his first film, La donna del fiume/The River Girl (Mario Soldati, 1954), he played a cigarette smuggler who has a tempestuous love affair with a young Sophia Loren (Ponti’s wife) in hot pants.

Hal Erickson at AllMovie: "The first half of the film plays for laughs, while the second half evolves into a lachrymose soap opera. Through it all, Sophia Loren looks like a million lire - and she even gets to sing and dance!" The film was an obvious attempt to recapture the success of Riso Amaro/Bitter Rice (Giuseppe De Santis, 1949) with Silvana Mangano.

After the success of the film, Battaglia attended a drama school for two years. Another attempt to cash in on Riso Amaro was La risaia/The Rice Girl (Raffaello Matarazzo, 1956), in which Battaglia appeared in the same kind of role opposite another sexy beauty, Elsa Martinelli.

In Germany he appeared as a slave merchant in the Liane-sequel Liane, die weiße Sklavin/Jungle Girl and the Slaver (Hermann Leitner, 1957) with Marion Michael, and he was seen in the Hollywood adventure Raw Wind in Eden (Richard Wilson, 1958) with Esther Williams and Jeff Chandler.

Italian postcard by Turismofoto, no. 86.


Rik Battaglia made one of his best films with La giornata balorda/A Crazy Day (Mauro Bolognini, 1961) opposite Jean Sorel and Lea Massari. Pier Paolo Pasolini co-wrote the screenplay for this black-and-white film about the lower class of Rome, based on a novel by Alberto Moravia.

One of his biggest flops was the biblical epic Sodom and Gomorrah (Robert Aldrich, 1962) with Stewart Granger and Pier Angeli. He appeared in several obscure peplums and such adventure films as Sandokan, la tigre di Mompracem/Sandokan the Great (Umberto Lenzi, 1963) with bodybuilder Steve Reeves.

He was also the co-star of Freddy Quinn in the Schlager Western Freddy und das Lied der Prärie/In the Wild West (Sobey Martin, 1964). Battaglia had a German fan base in those years. That changed abruptly when he became Winnetou’s murderer in Winnetou - 3. Teil/Winnetou: The Last Shot (Harald Reinl, 1965).

Spaghettiwestern.net: "Previous to the film's release, production company Rialto hinted that Winnetou would be killed in the movie, which led to spontaneous protests organized by the children's magazines. Battaglia was booed at the premiere and later confessed that people continued complaining about his vile act for years, even though several films (all presented as prequels) had been made with Brice as Winnetou in the meantime. When (director Harald) Reinl asked him again for a Winnetou movie, he allegedly answered: Only if I don't have to kill the hero!". 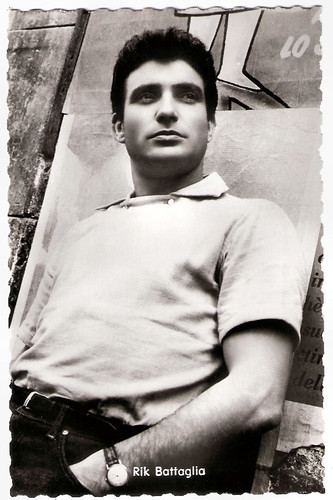 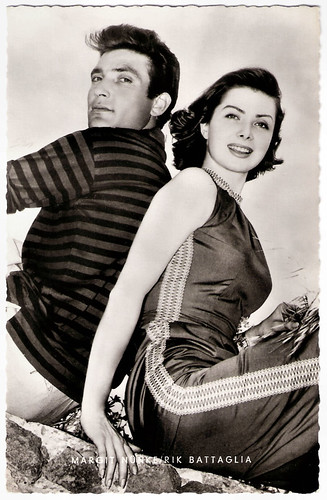 The best of these was Sergio Leone's epic Giù la testa/Duck, You Sucker!/A Fistful of Dynamite (1971), which failed to gain any substantial recognition from the critics at the time of its premiere, especially compared to the maestro's other films. Leone only won a David di Donatello for Best Director, but the film has received a more favourable reception since then.

Keith Phibbs at AllMovie: "A fantastic opening pitting Rod Steiger's earthy bandito against a stagecoach filled with rich bigots begins the film on a fantastic note that Leone has difficulty sustaining. But what the film loses in momentum, it gains in complexity. Pairing Steiger's character with James Coburn's nearly disillusioned Irish revolutionary expands the scope of the film in ways other than the geographical. While other political spaghetti Westerns simply pitted the haves against the have-nots, Duck, You Sucker! (named after a 'popular' American catchphrase known only to Leone), attempts to portray the full scope of revolution. That the director includes chilling scenes of wholesale massacre on the part of the ruling class would seem to betray his sympathies, but he also portrays the impact of revolutionary activity on those who rebel. (...) Though it includes too many awkwardly paced passages to qualify as anyone's favourite Leone film, the film's disastrous financial performance in America granted it an undeserved obscurity. The strange (even by his own standards) score by Ennio Morricone alone makes it worth seeking out."

Battaglia then featured as Captain Smollett in Treasure Island (John Hough, 1972), one of the many film versions of the classic adventure by Robert Louis Stevenson, with Orson Welles as Long John Silver. In 1974 he appeared in the Agatha Christie adaptation Ein Unbekannter rechnet ab/Ten Little Indians (Peter Collinson, 1974) which also starred Richard Attenborough and Gert Frobe.

Alternate names he used for his films were Rick Austin, Riccardo Battaglia and Rick Battaglia. His last feature film was Buck ai confini del cielo/Buck at the Edge of Heaven (Tonino Ricci, 1991) with John Savage.

In 1995, Rik Battaglia was awarded with the Scharlih, the oldest award associated with Karl May. He retired in 1999. On 27 March 2015, Battaglia died of heart failure at his home in Corbola in the province of Rovigo, Italy. He was 88.