Louise Lagrange (1897-1979) was a French screen actress who had a fruitful career in French silent and sound cinema from Cendrillon (1907) onwards. In the early 1920s she played in the USA opposite Valentino, while e.g. Ricardo Cortez and Iván Petrovich where her partners in later 1920s French films. In 1933 she married film director Maurice Tourneur and quited film acting, apart from a few parts in postwar films. 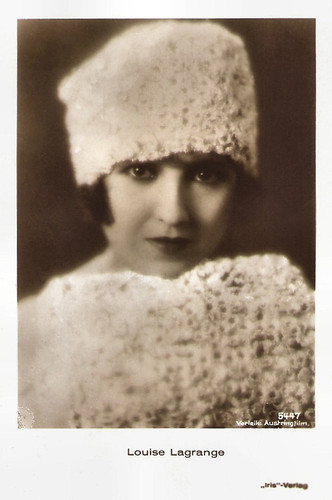 Austrian postcard by Iris-Verlag, no. 5447. Sent by mail in the Netherlands in 1925. Photo: Verleih Austringfilm. 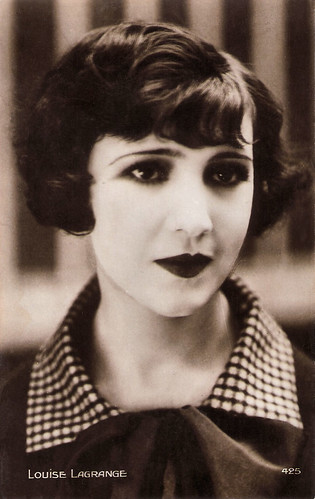 
Louise Lagrange was born Louise Marie Lagrange in Oran, France (now Algeria) in 1897. (IMDb mistakenly mentions 1898 as her birthyear and Louise Vinot as her birthname, but Vinot was her older sister Marthe's family name after her marriage).

She started her film career as Cinderella in the early Pathé fairytale film Cendrillon/Cinderella (Albert Capellani, 1907). The short silent film was produced by Ferdinand Zecca for Pathé Frères and the story was adapted from the famous fairy tale by Charles Perrault.

Five years later, she played in another version, Cendrillon, ou la Pantoufle Merveilleuse/Cinderella, or the Marvellous Slipper (1912), this time directed by the legendary Georges Méliès. According to Wikipedia she now played Cendrillon's sister, but according to IMDb she performed the role of Cendrillon. However, the prince was played by the future film director Jacques Feyder.

Between 1911 and 1916 she played at Gaumont. She appeared in many films by Louis Feuillade, including the adventure serial Les vampires/The Vampires (Louis Feuillade, 1915) with Musidora. She also often worked with director Gaston Ravel at such films as Madame Fleur-de-Neige (Gaston Ravel, 1915). Her older sister played smaller parts in these films of the under-aged Louise, under the name of Marthe Vinot.

In the late 1910s she also acted at Eclipse. For this studio, she appeared in the war propaganda film Mères françaises/French Mothers (1917). Legendary stage actress Sarah Bernhardt plays a mother, who first loses her son and then her husband in the trenches of France during the First World War. She devotes herself to the French cause and to helping those wounded in the war.

In the early 1920s Lagrange had the lead roles in L'héritage/The heritage (Jacques de Baroncelli, 1920) and Mimí Trottin (Henri Andréani, 1921) with Henri Rollan.

Then Lagrange moved to the USA to make films in Hollywood. She played opposite Rudolph Valentino in the drama A Sainted Devil (Joseph Henabery, 1924). She also appeared in two films directed by Herbert Brenon, The Side Show of Life (1924), and Shadows of Paris (1924). 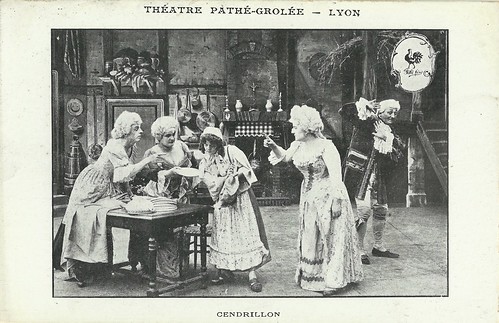 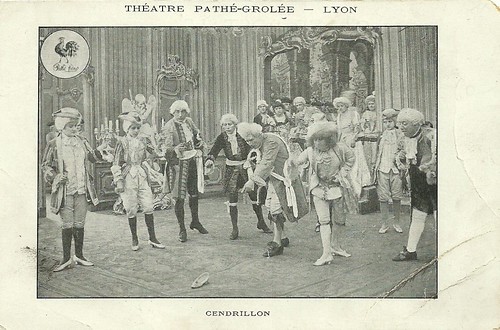 Louise Lagrange smoothly made the passage to French sound cinema and had leads in e.g. the French Paramount production Une femme a menti/A woman has lied (Charles de Rochefort, 1930), scripted by Herman Kosterlitz aka Henry Koster. Her co-stars were Jeanne Helbling and Paul Capellani.

After the war, Lagrange returned to the screen in a few parts after Tourneur had been crippled after a car accident in 1949. These films include La cage aux filles/Cage of Girls (Maurice Cloche, 1949) with Danièle Delorme and the Fernandel comedy Adhémar ou le jouet de la fatalité/Adhémar (Fernandel, 1951), in which she had an uncredited bit part.

Louis Lagrange died of 'natural causes' in Paris, France, in 1979. She was 80 (IMDb) or 81 (Wikipedia). We checked a third source, the reliable French site Les Gens du Cinéma, which gives 1897 as Louise Lagrange's birth year. 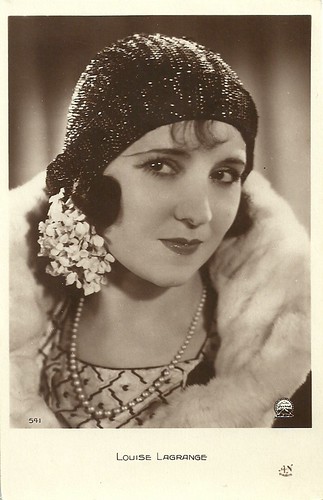 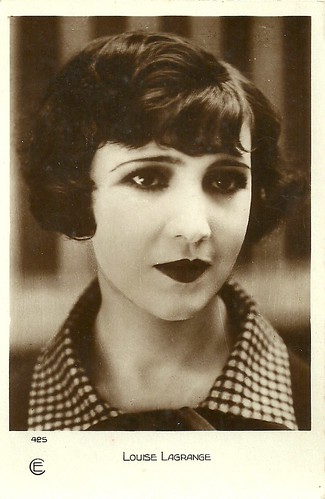 French postcard by Cinémagazine Editions, no. 425.