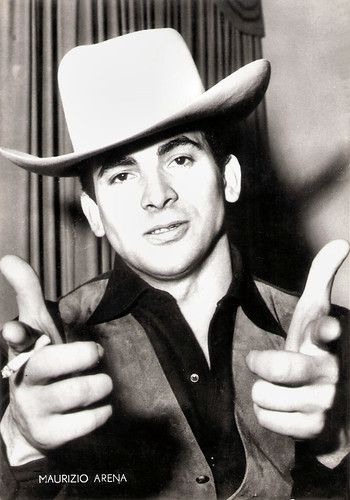 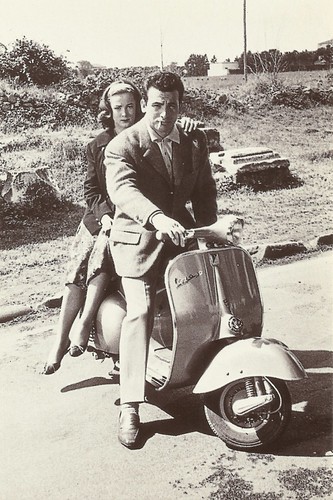 Italian postcard by Ed. Pontedera for Piaggio. Reprint. Maurizio Arena and Cathia Caro on a Vespa, c. 1960. Caro and Rena played together in e.g. Simpatico mascalzone (Mario Amendola, 1959), and Il principe fusto (1960), directed by Arena himself.

Beauties on a Motor Scooter


Maurizio Arena was born as Maurizio di Lorenzo in Rome in 1933.

Arena made his film debut at nineteen years old, with a small role in Bellezze in moto-scooter/Beauties on a motor scooter (Carlo Campogalliani, 1952) featuring Isa Barzizza.

He played Giovanna Ralli’s boyfriend in Villa Borghese/It Happened in the Park (Vittorio de Sica, Gianni Franciolini, 1953). The film consists of six vignettes set in the Villa Borghese gardens in Rome. He also had a small part in the drama La lupa/She-Wolf (Alberto Lattuada, 1953). It is based on the novella with the same name by Giovanni Verga.

He also played a smart part in the comedy Il segno di Venere/The Sign of Venus (Dino Risi, 1955) starring Sophia Loren, which was entered into the 1955 Cannes Film Festival. He had a bigger role as a thief in the Totò comedy Totò e Carolina/Totò and Carolina (Mario Monicelli,1955) with Anna-Maria Ferrero. The film was banned when it was first released, as it made fun of a policeman.

His breakout role came in 1956 with the role of Romolo in the successful romance-comedy film Poveri ma belli/Poor, But Handsome (Dino Risi, 1956). Romolo and Salvatore (Renato Salvatori) are two poor, but handsome friends, who live with their parents in Piazza Navona, Rome, and who both fall in love with Giovanna (Marisa Allasio). The success of the film lead to two sequels with Arena and Salvatori, Belle ma povere/Pretty But Poor (Dino Risi, 1957) and Poveri milionari/Poor Millionaires (Dino Risi, 1958). 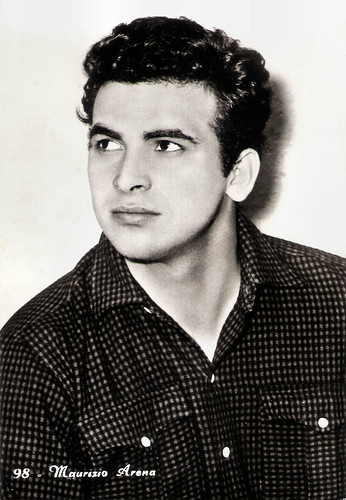 Italian postcard by Turismofoto, no. 98. 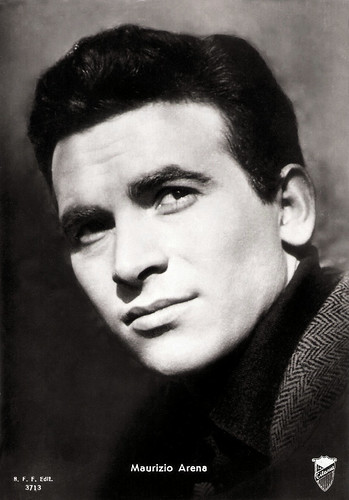 
Until the early 1960s, Maurizio Arena was one of the most popular actors in the Italian cinema. He appeared in such films as the adventure Il diavolo nero/The Black Devil (Sergio Grieco, 1957), the comedy Amore e guai/Love and Troubles (Angelo Dorigo, 1958) starring Marcello Mastroianni, and the drama Un uomo facile/The Defeated Victor (Paolo Heusch, 1958).

He was also a protagonist of the gossip columns for his tumultuous love life. During the 1960s, his film career went into decline. His films included the comedy Il carabiniere a cavallo/The policeman on horseback (Carlo Lizzani, 1962) starring Nino Manfredi, the drama La fuga/The Escape (Paolo Spinola, 1964) starring Giovanna Ralli, and the anthology comedy Le bambole/The Dolls (Luigi Comencini a.o., 1965).

Arena reunited with director Dino Risi for one of his final films, the excellent comedy Telefoni bianchi/The Diary of a Chambermaid (Dino Risi, 1976) with Agostina Belli. This was an homage to Italy’s White Telephone films, the sophisticated comedy-dramas of the 1930s and 1940s, revolving around working-class girls.

In the last years of his short life Arena was also a healer with some local following, and he was an occasional singer. In 1979, Maurizio Arena died in Rome at the age of 45, following a heart attack. In 2008 a park was named after him in his native district Garbatella. 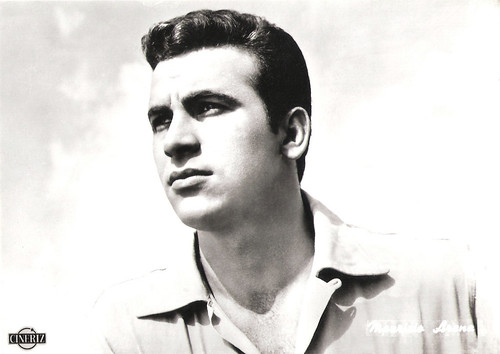 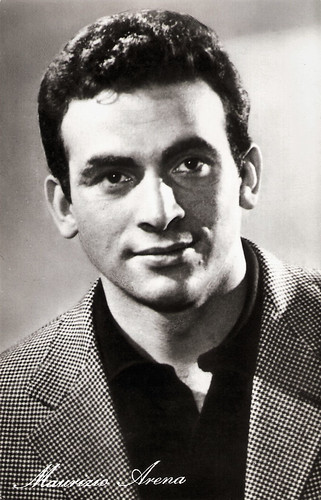