Swedish actress Karin Molander (1889–1978) was a star of the silent Scandinavian cinema. In the films of Mauritz Stiller, she became a symbol of the modern, young and emancipated women of the 1910s. 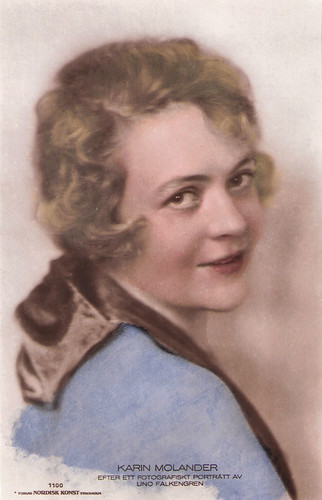 Swedish postcard by Förlag Nordisk Konst, Stockholm, no. 1100. After a portrait by Uno Falkengren. 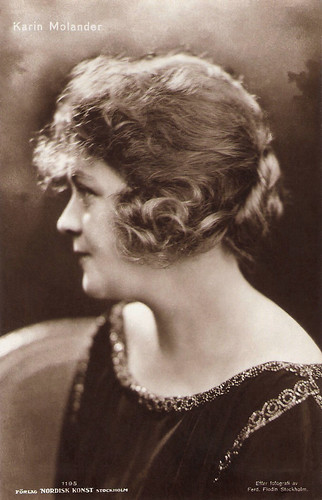 
Karin Molander was born as Katarina Margareta Elisabet Edwertz in Vårdinge, Sweden in 1889. She had acting classes from Julia Håkansson. In 1907 she made her stage debut at the Vasateatern in Stockholm.

For a period she worked in Helsinki, Finland, where she met actor Gustav Molander who would later become a well-known film director and screenwriter. He wrote several screenplays for Victor Sjöström and Mauritz Stiller, and was helped by the latter to get employment as a director for Svensk Filmindustri and would later direct Intermezzo (1936), which became Ingrid Bergman's breakthrough and paved her way to America.

Karin and Gustav married in 1910 and returned to Sweden. She was engaged at the Intiman (Intimate theatre) (1911-1920), and hesitantly, she made her film debut in Victor Sjöström's Halvblod/Half-Breed (1913).

In the delightful comedy Tomas Graals basta film, Victor Sjöström plays a screenwriter, struggling to cope with the trials and tribulations of everyday life. Sjöström’s effort to succeed in the film industry are complicated by his romance with a rich man’s daughter (Karin Molander). At AllMovie, Hal Erickson writes: “Though the plot is pure sitcom fluff, Thomas Graal’s Best Film offers a tantalizing behind-the-scenes glimpse of Swedish film-making techniques, vintage 1917.”

With her healthy and relaxed playing style Karin Molander became a symbol of the modern, young and emancipated women. Later, she made more dramatic film roles as the title character in Synnøve Solbakken (John W. Brunius, 1919) opposite Lars Hanson, with whom she fell in love. The couple went on tour together and in 1919 Karin divorced from Gustav Molander. 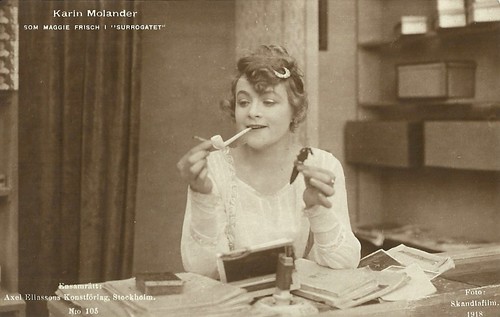 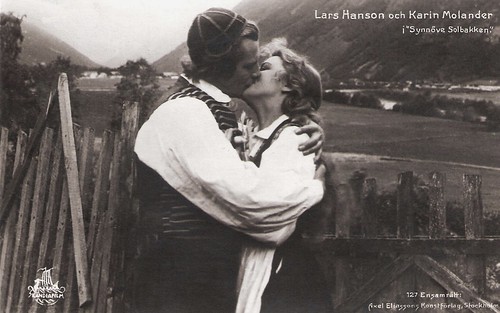 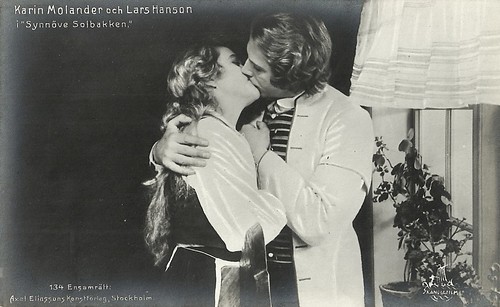 
Karin Molander’s last film with Stiller became a classic: Erotikon/Bonds That Chafe (Mauritz Stiller, 1920). By 1920 the artistic achievements of the Swedish cinema and its main directors, Victor Sjöström and Mauritz Stiller, were universally recognized. Most of their films reflected the life of rural Sweden. Stiller, a cultured man, decided to make a film set in a sophisticated urban milieu, Erotikon.

The story is about a professor of entomology (Anders de Wahl) who is sustained in his work by his devoted niece (Karin Molander) while his neglected wife seeks consolation elsewhere. Stiller built elaborate sets and commissioned a special exotic ballet for the theatre scenes which were shot in the Royal Opera House of Stockholm, with a host of society extras for an audience. The film reflected the fashionable life of the city and a modernity indicated by the inclusion of scenes with airplanes.

At Film Reference, Liam O’Leary writes: “It is handled with the lightest of touches; the irony of the scene where the man who tries to reconcile the married pair becomes the wife's lover is reminiscent of Ernst Lubitsch. Stiller's stylish direction works well with his talented players. Tore Teje's delightful portrayal of the wife is witty, wise and worldly. It is in striking contrast with the peasant role she had played the previous year in Sjöström's Karin Ingmarsdotter. Karin Molander's charming performance as the young niece is equally effective.”


Erotikon helped to create a new genre of social comedy, and attracted considerable attention in the film world. However, it did not do anything for Karin Molander’s film career.

She played successfully on stage and married Lars Hanson in 1922. The newly wedded couple were regarded as superstars by theatre audiences. Molander made a guest appearance at the Lorensbergsteatern (Lorensbergs-Theatre) (1920-1922) and at the Kungliga Dramatiska Teatern (Royal Dramatic Theatre) (1922-1925).

For a few years at the end of the 1920s, she was inactive as an actress. She had followed her husband to Hollywood, where he starred opposite Lillian Gish in the silent classics The Scarlet Letter (1926) and The Wind (1928). On the net are pictures of Molander and Hansen in Hollywood, picknicking with Mauritz Stiller and Greta Garbo.

Back in Sweden Molander was engaged at the Royal Dramatic Theatre between 1931 and 1936, and after that she retired. In 1934 she had been awarded with the Royal Medal Litteris et artibus. Years later, she returned from her retirement once to play a supporting part in the film Gabrielle (Hasse Ekman, 1954).

Karin Molander and Lars Hanson stayed together until his death in 1965. Molander died in 1978 in Täby, Sweden. She was 89. She was survived by her son, actor-producer Harold Molander.