Dignified German-Russian actress Olga Tschechova (1897-1980) was one of the most popular stars of the German silent cinema. During the following decades, she became the 'Grande Dame of German Film'. She remained a mysterious person throughout her life, and reportedly, she was a Russian agent in Nazi Germany. 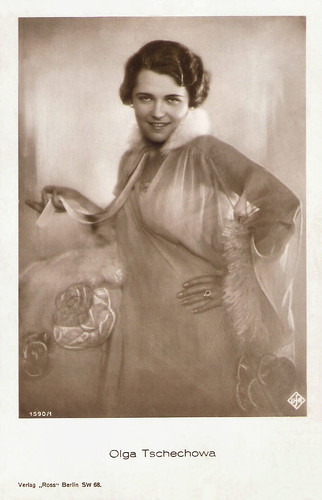 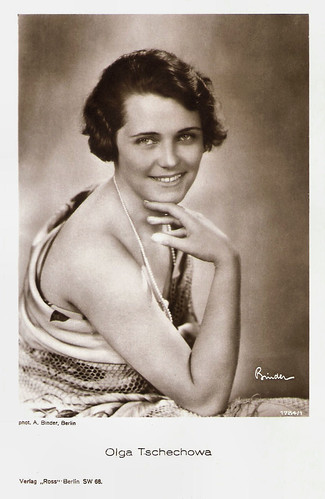 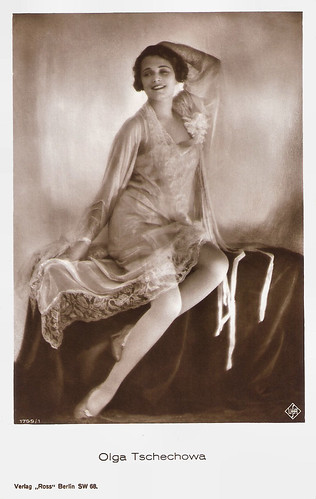 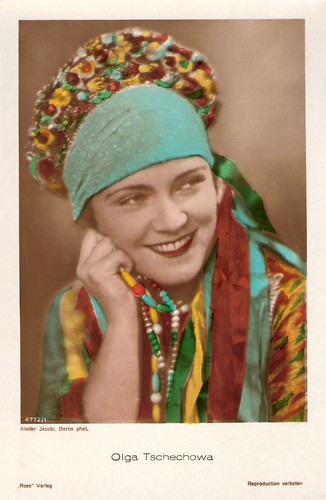 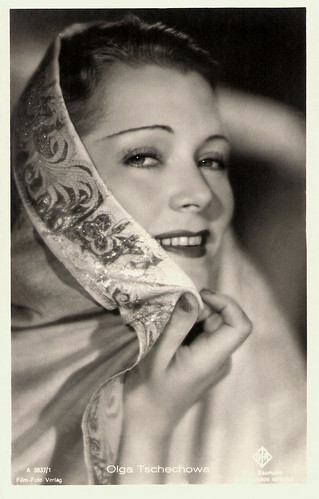 The Niece of Anton Chekhov's Wife


Olga Tschechova - or in Russian Olga Chekhova and in German Olga Tschechowa - was born Olga Konstantinovna Von Knipper in Alexandropol, Russian Empire (now Gyumri, Armenia), in 1897. She was the second of three children in a wealthy bilingual Russian-German family.

Her father, Konstantin Knipper, was a military railroad engineer. Her family had very good contacts to the court of the Czar. Olga studied sculpture at the St. Peterburg Academy of Arts. Then was sent to Moscow to her aunt, actress Olga Knipper, Anton Chekhov’s wife, and joined a studio of the Moscow Art Theatre.

Their daughter, Ada Tschechowa was born in 1916. Olga separated from Michael Chekhov during the chaos and disaster of the Russian Revolution in 1917. Michael had met another beauty, Xenia Zimmer, and became involved in extramarital affair while Olga was pregnant with their child.

That same year she made her film debut in a Russian silent film Anya Kraeva (Nikandr Turkin, 1917). More small parts followed in the films Kaliostro/Cagliostro (Wladyslaw Starewicz, 1918), and Posledeniye priklyucheniya Arsena Lyupena/Arsène Lupin's Last Adventures (Mikhail Doronin, 1918). In these films she was credited as Olga Chekhova. 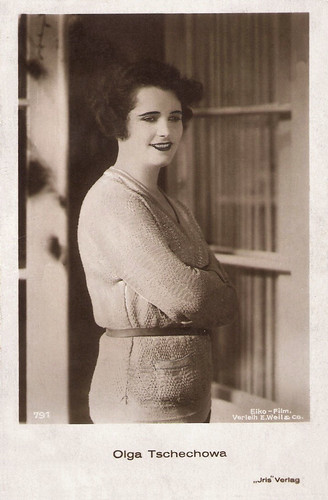 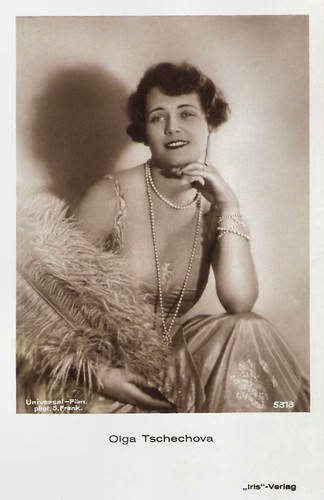 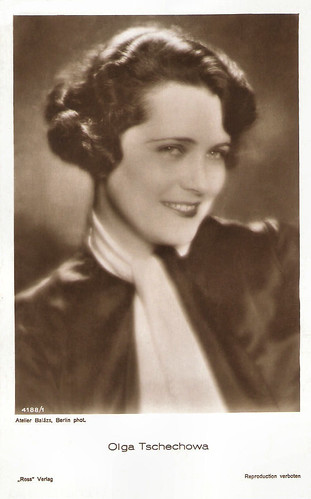 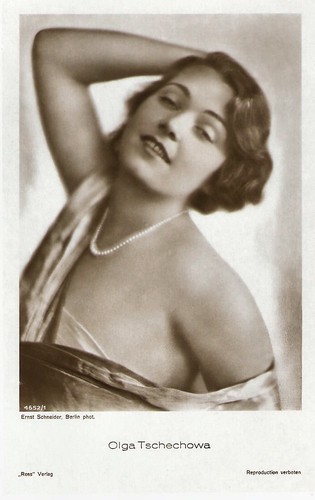 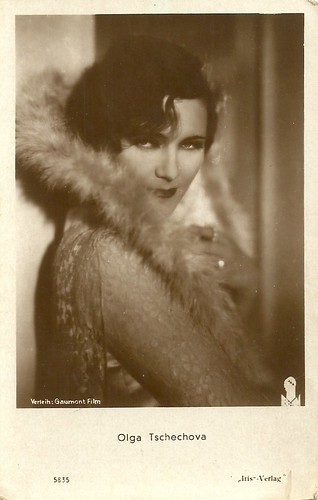 
In 1920, Olga Tschechova married an Austro-Hungarian officer, Friedrich Jaroshi, and took a train to Vienna, Austria. She had travel documents from the Russian government Commissar of Culture, and was helped by the secret service in exchange for cooperation.

Later that year she moved to Berlin, where she was introduced to Ufa producer Erich Pommer, who gave her a leading role as a baroness in Schloss Vogelöd/The Haunted Castle (F.W. Murnau, 1921).

Tschechova managed her breakthrough with her performance as a seductress and Grande Dame in Die Stadt der Versuchung/The City of Temptation (Walter Niebuhr, 1925).

She quickly became a huge star in Europe and played in more than 40 silent films during the decade, including the classic comedy Un Chapeau de Paille d'Italie/An Italian Straw Hat (René Clair, 1927), Moulin Rouge (Ewald André Dupont, 1928), and Diane (Erich Waschneck, 1929), which was produced by her own company Tschechowa Film.

Olga was joined by her ex-husband Michael Chekhov in several films, including Der Narr Seine Liebe/The Fool of Love (1929), which she directed herself. In spite of the positive reviews this would be her only direction. 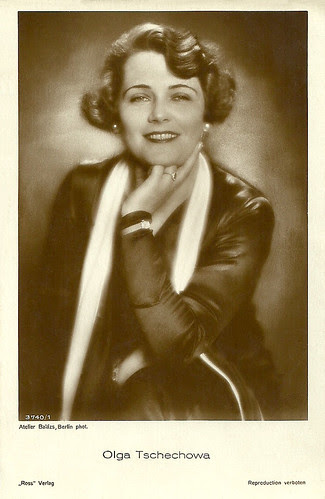 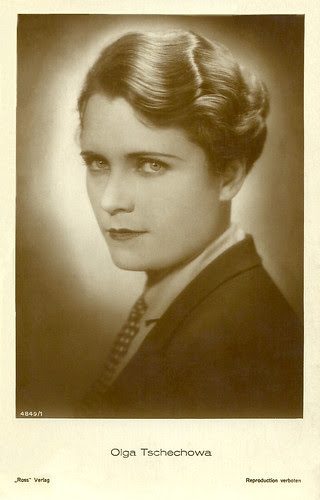 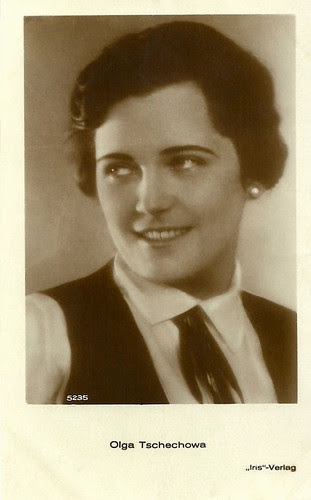 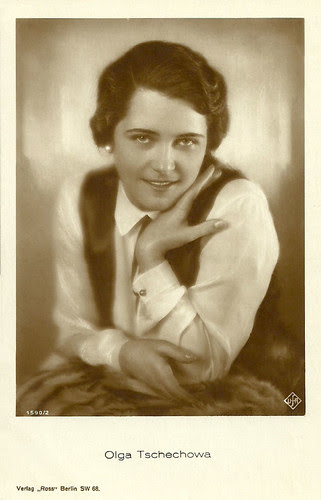 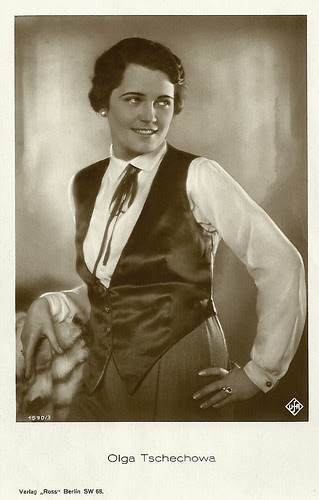 The following year Tschechova did the German-language version of The Boudoir Diplomat (Malcolm St. Clair, 1932) in Hollywood but she preferred to work in Europe. She earned the best reviews of her long career for Max Ophüls' early masterpiece Liebelei/Flirtation (1933). It was made shortly before the Nazis took over control of the German film industry and nothing would ever be the same again.

Although apolitical and quite publicly expressing her fondness for American-style comedies and musicals, Tschechova could not escape appearing in several of the so-called Friedrich-Filme, heavy-handed sturm-und-drang melodramas glorifying 18th century Prussian ruler Frederick the Great and much beloved by the political hierarchy.

She was famous for her film image as a baroness or a countess. Olga was courted by the Luftwaffe boss Hermann Göring and by Propaganda Minister Josef Goebbels, and became a personal friend of Adolf Hitler. She was photographed sitting next to the Fuhrer at official events of the Nazi Party. In 1936 she was honoured with the title of State Actress of the Third Reich.

She married a wealthy Belgian businessman Marcel Robyns, but two years later she divorced him and returned to her high society life in Berlin. In the 1940s followed well-known productions like Der Fuchs von Glenarvon/The Fox of Glenarvon (Max W. Kimmich, 1940), and Andreas Schlüter (Herbert Maisch, 1942).

She survived and protected her daughter Ada Tschechova from the Nazi anti-Semitism, by hiding the fact that her ex-husband Michael Chekhov was Jewish. Her brother Lev Knipper was held in a Nazi concentration camp and he probably also managed to survive because of her help. During the battle of Berlin, Olga hid in a bomb shelter and was seized by the Red Army. 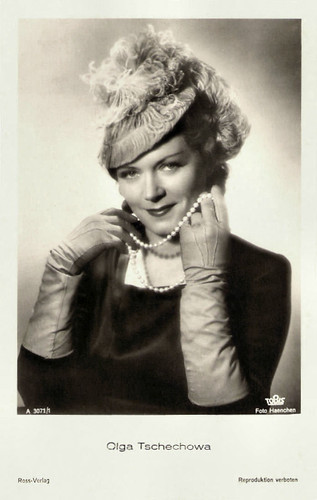 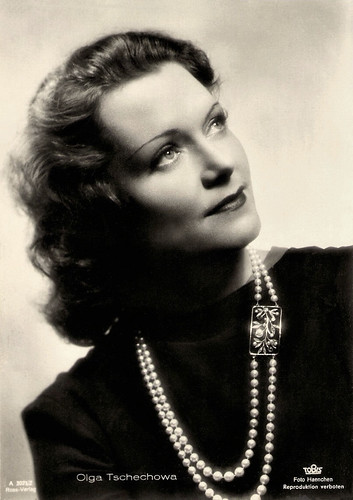 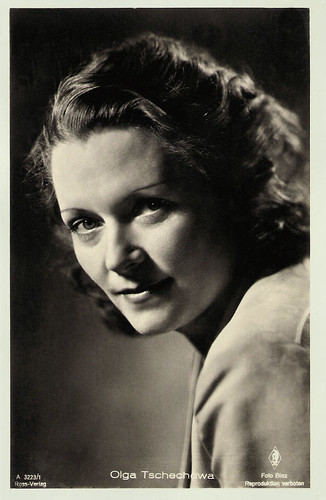 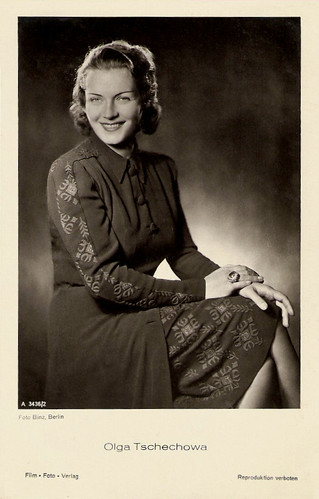 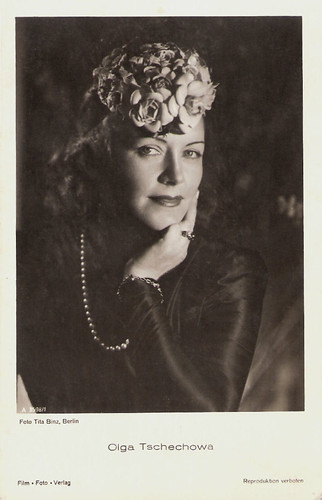 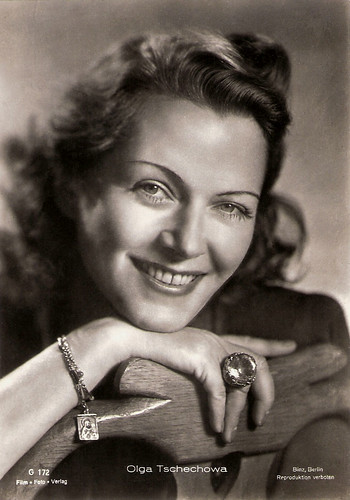 
After the war Olga Tschechova lived in the Soviet sector of Berlin. French and British press reports stated that Olga Tschechova was a clandestine agent and was secretly decorated by the Soviet government. Eventually she managed to escape from her Soviet contacts and in 1949, she moved to Munich, Bavaria.

In 1955 she launched a successful cosmetics company, Olga Tscheschowa Kosmetik Geselschaft and at the end of the 1950s she retired from the film business. In 1966, Olga's only daughter Ada died in an airplane crash. Devastated by the painful loss, Olga suffered from bouts of depression and turned to alcohol, but she survived thanks to her strong will and lust for life.

In the 1970s, she had a short comeback in the cinema. A chance to work with her famous granddaughter Vera Tschechova led to an appearance in the TV series Duell zu Dritt/Duel for Three (1971). Roles followed in the films Die Zwillinge vom Immenhof/Twins from Immen Farm (Wolfgang Schleif, 1973) and finally Frühling auf Immenhof/Springtime for Immen Farm (Wolfgang Schleif, 1974). Her remarkable acting career, spanning almost 60 years, ended with a small film role as a grandmother.

She published her memoirs. According to the book Killing Hitler (2006), by the British author Roger Moorhouse, Tschechova was pressured by Stalin and Beria to flirt with Adolf Hitler in order to gain and transfer information so that Hitler could be killed by secret Soviet agents. In her own book, Tschechova she wrote about her good contacts to the leading Nazis but she denied activities as an agent.

Moments before Olga Tschechova died in 1980 in  Munich-Obermenzing, Germany, she ordered a glass of champagne from her granddaughter Vera Tschechowa, sensing the end was near. Her last words were: “Life is beautiful!” She was 82. Her correspondence with Russian actors Olga Knipper and Alla Tarasova was published posthumously.