Dutch singer Annie de Reuver has passed away. In the 1940s and 1950s she was one of the most popular Lady crooners, first with the big band The Ramblers and later with The Skymasters. She also appeared in one of the few Dutch film productions of the war period, the short musical Wie gaat mee?/Who will join? (1942). Her biggest hit was the song Kijk eens in de poppetjes van mijn ogen (Look into the puppets of my eyes). She was 98. 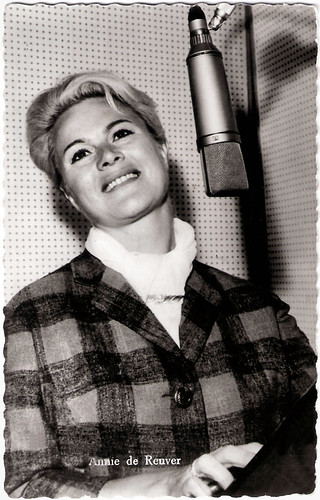 
Anna Maria Clasina de Reuver was born in Rotterdam, the Netherlands, in 1917. Annie inherited her love of music from his mother's side. During her school years she started with two boys the musical trio The Rhythm Aces. Then she sang with amateur big band The Blue Blowers.

De Reuver made her debut with the popular big band The Ramblers in 1934. She was nearly eighteen years old when De Reuver auditioned for conductor Theo Uden Masman and was accepted. Soon she was heard live on national radio broadcasts. In 1935 De Reuver joined The Ramblers and the American tenor saxophonist Coleman Hawkins to make recordings for Decca.

During the war period, De Reuver sang Dutch songs with several orchestras, despite the prevailing dance ban imposed by the occupying forces. She performed with such contemporary singers as Teddy Scholten and Thom Kelling. She also appeared in one of the few Dutch film productions of the war period, the short musical Wie gaat mee?/Who will join? (Reinier J. Meyer, 1942). After she had refused to become a member of the Nederlandse Kultuurkamer (the Nazi driven Dutch Chamber of Culture) in 1944, she could not perform anymore.

After the war De Reuver sang with several orchestras at home and abroad. She was often on the road but got homesick. When trombonist Pi Scheffer founded The Skymasters in 1946, De Reuver joined this orchestra. From 1947 to 1949 she lived in Venezuela, where her then husband led a Philips division. Then she returned to The Skymasters. In total, she would sing five years with the orchestra, with three performances per week for the radio.

De Reuver was best known for such songs as Harmonica Jim, Wenen (Vienna), Lied van het Pierement (Song of the Pierement), Veel bittere tranen (Many bitter tears), Diep in mijn hart (Deep in my heart) and Kijk eens in de poppetjes van mijn ogen (Look into the puppets of my eyes). The last one she recorded for the first time in 1952 as a duet with Karel van der Velden and The Skymasters. 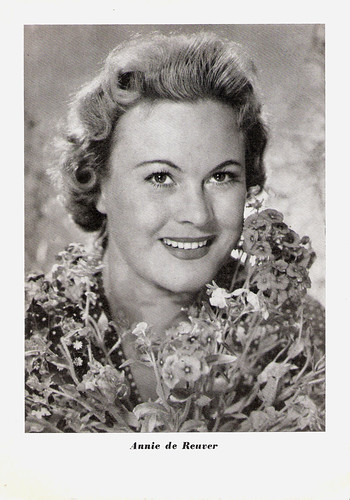 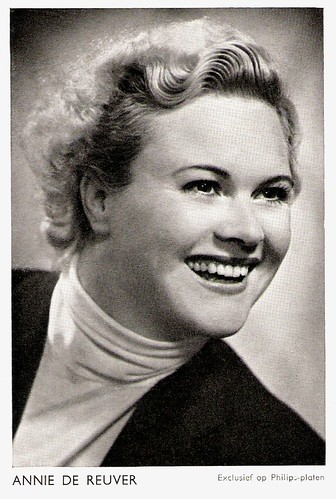 
In the 1960s, Annie de Reuver often performed with the orchestra De Reuvertjes. She did tours for Dutch soldiers in the Netherlands, Germany and on ships. For years, she also sang twice a week on the radio. She often performed with contemporary artist Eddy Christiani. Around 1955, Christiani and De Reuver were repeatedly voted best Dutch vocalists by the leading Dutch magazine Tuney Tunes.

In 1968 she started as a record producer for Dureco in Amsterdam. De Reuver was quite successful in discovering and guiding Dutch talent. She spotted such artists as Oscar Harris, the Kermisklanten and Ben Cramer. For the latter, she produced his first hit: Zai Zai Zai (1967). She also discovered singer and producer Pierre Kartner a.k.a. Vader Abraham. Kartner and De Reuver recorded songs together as the Duo X.

In the early 1970s De Reuver moved to CNR Records, and later to record company Telstar. There she also discovered and promoted new talent. On a freelance basis, De Reuver also was a juror in TV talent shows at NCRV television. She later presented several radio shows.

In her seventieth, De Reuver produced the hit Kleine Jodeljongen (Little Jodel Boy, 1987) by Manke Nelis for Dureco, now as a freelancer. She occasionally appeared in nostalgic radio programs. In 1994 De Reuver received a royal decoration and the Erasmusspeld of the municipality of Rotterdam.

In 2005, the 88-years-old De Reuver performed in the Luxor Theater in Rotterdam on the occasion of 60th anniversary of the Day of Independence. To celebrate her 90th birthday, she published her book Onverbloemd (Candidly, 2007). This biography, written by journalist Rein Wolters, describes her life and career.

Annie de Reuver died as a result of complications after a fall. Actor Bas van Toor, a good friend of De Reuver, discovered she had fallen when he came to bring her donuts on New Year's Eve. The singer was still in surgery, but died a day later in her hometown Rotterdam. Annie de Reuver would have been 99 in February. She married and divorced four times and had no children.