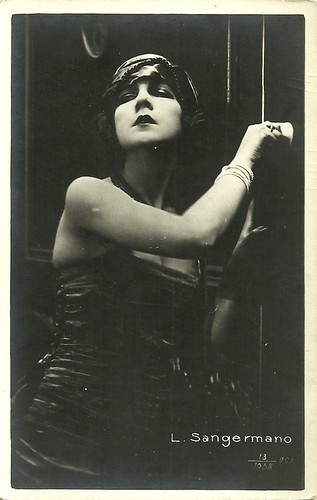 Lucy Di San Germano was born in Turin in 1898, originally named Lucia Moglia. She was the younger sister of actress Linda Moglia (1896-?). Very little is known about her private life.

Lucia got her actor’s name right from the start in film business, when she had a supporting act in the film Passa la gioventù/Youth passes (1917), directed by Achille Consalvi The film's star was Maria Campi, an older actress from the vaudeville, who had been producer of the film too.

The film was received negatively, in contrast to Sangermano’s next film, La maschera del barbaro/The mask of the barbarian (Paolo Trinchera, Ambrosio 1918), a war propaganda film about a sister who substitutes for a deserter, until he decides to return and sacrifice himself. Though the story was thin, the critics praised the performances of Francesco Casaleggio and Sangermano as the brother and sister.

From 1918 on, Di San Germano worked for years at Ambrosio, and often co-acted with regular supporting actors of those years, such as Dante Cappelli, Umberto Scalpellini, Vasco Creti, Ernesto and Ercole Vaser, Lidia Benelli a.o.

Under the pseudonym of Kismet, Paolo Trinchera directed Di San Germano again in an adaptation of Marcel Prévost: Chonchette (1918), about an officer of the Spahis (Roberto Villani) who suspects his daughter (Luisa Benelli) to be the fruit of an adulterous affair of his wife (Di San Germano) with his friend. 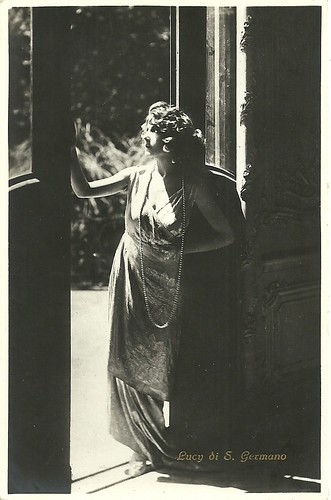 Real characters instead of mannequins

In December 1918, just when the First World War had ended, three films with Lucy Di San Germano were released.

Noblesse oblige (1918), based on a boulevard comedy by Hennequin and Veber, was apparently directed by the famous poster designer and illustrator Marcello Dudovich, whose only film direction this was. In addition to Di San Germano, her sister Linda Moglia also acted in the film.

Di San Germano also acted in Lagrime del popolo/Tears of the people, in which the forzuto (strong man) Alfredo Boccolini aka Galaor is involved in a drama of two families, one rich and immoral, and one working-class and honest. Di San Germano is the working class girl seduced by the rich young industrial’s son.

A third film released at the same time was …E dopo?/And then? (1918) directed by Febo Mari and with himself in the lead as a proud prime minister, a thinker, fighter, ascetic and legislator together, whose daughter (Di San Germano) instead falls for a sleek, elegant young man, her cousin (Luigi Cimara). She reveals him all kinds of top secrets with which the young man can speculate. While the high placed father fights corruption, misery and weakness, the little people finally manage to push him off his pedestal.

Febo Mari’s film was praised in the press as a superb creation in which Mari had turned he actors in real characters instead of mannequins, while also praising the actor’s performance of all involved, including Di San Germano.

Lucy Di San Germano had a lead in the film La gibigianna (1919), directed by the Ambrosio veteran Luigi Maggi and based on a popular play by Carlo Bertolazzi.

She plays Bianca, a porcelain factory worker who marries Enrico, the foreman (Sandro Ruffini), who has gone down the social ladder and hates wealth. Instead Bianca aspires to a high life and eventually drops him for a rich man. When he begs her to come back and she refuses, he strikes her with a knife and escapes, afraid he killed her. When overcome with grief, he is about to go to jail (another source says he is about to commit suicide), she saves him.

While La gibigianna was disliked in the Italian press, there was praise for the next film L’amante della luna (Achille Consalvi, 1919), based on a popular novel by Paul de Kock and starring Di San Germano and Villani. Villani is the Moon Lover who sleeps in daytime but sets things straight at night time.

The Italian newspaper La Stampa wrote at the time: “One of the most passionate dramas, which keeps the audience tied to the screen until the last word.” Di San Germano is the innocent girl who is about to succumb to a seductress avid for power and money, and in particular her acting was praised. 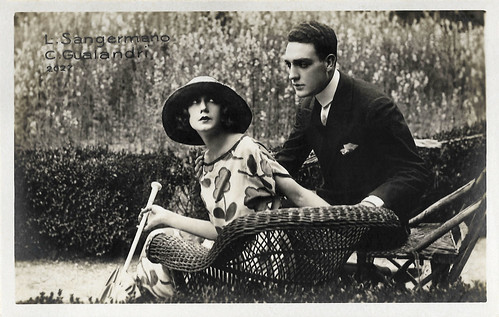 A Charade gets Out of Hand

While audiences loved it, the press had reservations. The story deals with count Renato (Carminati) and writer Maurizio (Serventi) who love the same woman Cecyl (Di San Germano). After a duel between the men she chooses and marries the count. In Venice the writer finds Zanze, a lookalike of the woman (again Di San Germano), and stages a charade to convince the count his wife is committing adultery and to win the woman back. It gets out of hand. The count chases his wife who dies out in the streets, while he also kills the lookalike, holding her for his wife. 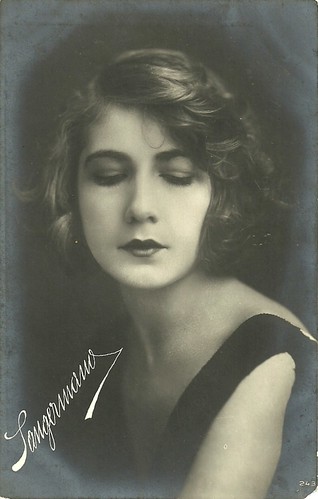 Collo plays a man who is robbed of all his belongings just before marrying a rich heiress (Di San Germano). Together they go after the thief, who is the least expected one: the loyal secretary.

Apparently, Di San Germano stopped her film career in 1922. Was the reason for her exit the decadence of the Italian film industry? Did she retire because she married?

Or was the reason for stopping her film career the contemporary competition of her sister Linda Moglia as Roxanne in the period piece Cirano de Bergerac by Augusto Genina? Cirano, which co-starred Ferrari as Christian, De Sanctis as the governess and Pierre Magnier as Cyrano, was released one year after in France, where it was a huge success in Paris, and was released in Italy only in 1926.

However, Linda Moglia, after one more film in 1924, also called her screen acting a day, just like her sister. It is unclear what happened with the sisters afterwards.