Austrian actor Erich Auer (1923-2004) was an all-rounder. As a stage actor, he played 150 different roles on the Austrian stage. He appeared in Operettas at the Volkstheater and in character roles at the Burgtheater. Auer also became one of the handsome young heroes of the postwar Austrian and German cinema, especially in the Heimat film genre. Later he was often seen on TV and worked as a teacher and director. 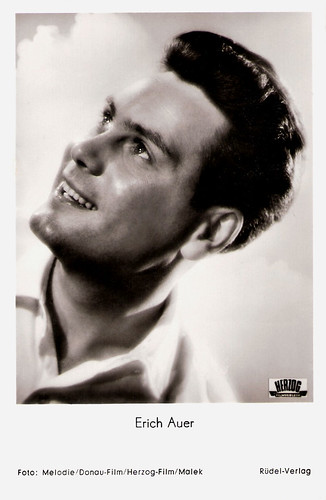 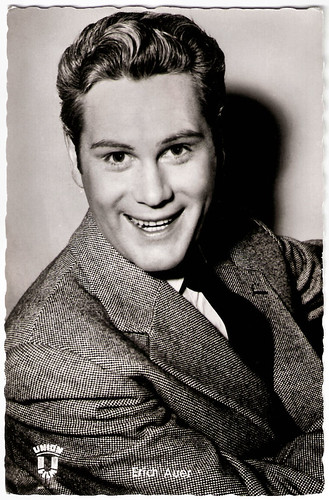 
Erich Auer was born in 1923 in Innsbruck (some sources say Vienna), Austria. He came from a family of Tyrolean actors. Auer attended the teacher training college.

In the years 1941 to 1945, he had to report for duty in the Wehrmacht, but he came into Soviet captivity. After his release, he joined drama training at the Vienna Conservatory. There he met the actress Martha Wallner, whom he later married.

In 1946, he got his first engagement at the Linzer Landestheater. Two years later he returned to Vienna and acted until 1950 at the Volkstheater.

In 1951 he joined the ensemble of the Burgtheater. Here he played more than 150 roles in numerous classical and modern plays. Important roles were Creon in Sophocles' Oedipus the King, Biff in Arthur Miller's Death of a Salesman, Antonio in William Shakespeare's The Merchant of Venice, Valentin in Ferdinand Raimund’s Der Verschwender (The Spendthrift) and the old Merenberg in Franz Grillparzer's König Ottokars Glück und Ende (King Ottokar's Fortune and End).

Auer received many awards and honours for his work. In 1963 he was honoured with the title of ‘Kammerschauspieler’, in 1986 he became an honorary member of the Burgtheater and in 1989 he retired. From 1973 on, he was also a board member at the Burgtheater. 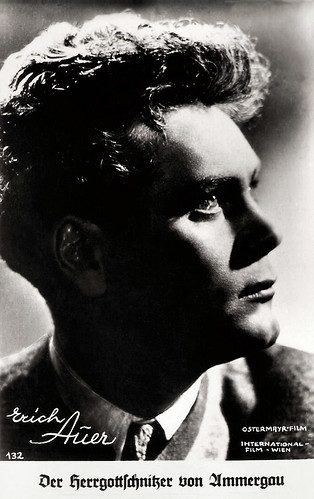 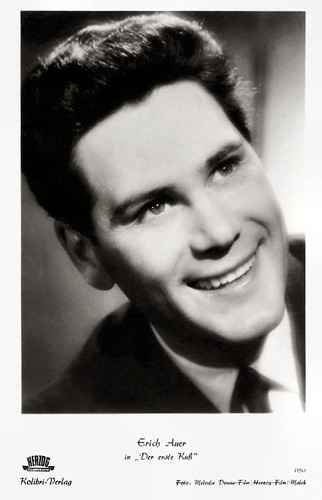 
Beyond Vienna, Erich Auer was known for his roles in the German-speaking films of the post-war period. He made his film debut with a supporting part in the crime film Duell mit dem Tod/Duel with Death (Paul May, 1949).

In the cinema he had his breakthrough with the Operetta Der fidele Bauer/The Merry Farmer (Georg Marischka, 1951) as the son of Paul Hörbiger. Auer then appeared as Jeune Premier in many popular Heimat films of the era, including Der Herrgottschnitzer von Ammergau/The lord-carver of Ammergau (Harald Reinl, 1952), Der Klosterjäger/The Monastery's Hunter (Harald Reinl, 1953) with Marianne Koch, and Die Försterbuben/The Ranger boys (Robert A. Stemmle, 1955).

In the 1960s he concentrated on stage and TV work. On television, he could be seen in many Austrian and German productions including stage adaptations of Friedrich Schiller’s Kabale und Liebe/Intrigue and Love (Gerhard Klingenberg, 1976) with Klaus Maria Brandauer. He also acted in the mini-series Die Alpensaga/The Alp saga (Dieter Berner, 1977) and an episode of the Krimi series Tatort (Jochen Bauer, 1982).

In his later years, he was also much in demand as a drama teacher. His last role was that of Colonel Pickering in My Fair Lady (2003-2004) at the Vienna Volksoper. Erich Auer passed away in 2004 in his hometown Vienna. He was 81.