Sir Cedric Hardwicke (1893-1964) was an English stage and film actor whose career spanned nearly fifty years. His theatre work included notable performances in productions of the plays of Shakespeare and Shaw. From the late 1930s on, he was in great demand in Hollywood. 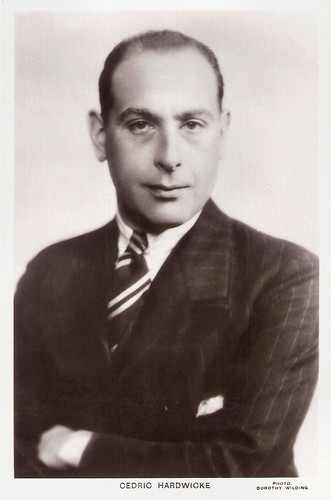 
Cedric Webster Hardwicke was born in Lye, Worcestershire, in 1893, to Dr Edwin Webster Hardwicke and his wife, Jessie (née Masterson). He attended Bridgnorth Grammar School in Shropshire, after which he intended to train as a doctor but failed to pass the necessary examinations.

He turned to the theatre and trained at the Royal Academy of Dramatic Art (RADA). In 1912, Hardwicke made his first stage appearance in Frederick Melville's melodrama The Monk and the Woman at the Lyceum Theatre, London. In 1913 he joined Benson's Company and toured in the provinces, South Africa and Rhodesia. In 1914 he appeared at the Old Vic as Malcolm in Macbeth, Tranio in The Taming of the Shrew, and the gravedigger in Hamlet.

WWI intervened in his career, and from 1914 to 1921 he served as an officer in the Judge Advocate's branch of the British Army in France. He was one of the last members of the British Expeditionary Force to leave France. Following his discharge, in January 1922 he joined the Birmingham Repertory Company, playing a range of parts from the drooping young lover Faulkland in The Rivals to the roistering Sir Toby Belch in Twelfth Night.

Hardwicke played many classical roles on stage, appearing at London's top theatres, making his name on the stage performing works by George Bernard Shaw, who said that Hardwicke was his fifth favourite actor after the four Marx Brothers. Hardwicke starred in such Shaw plays as Caesar and Cleopatra, Pygmalion, The Apple Cart, Candida, Too True to Be Good, and Don Juan in Hell.

He started to appear in film in 1926. He played Admiral Horatio Nelson in the silent biopic Nelson (Walter Summers, 1926) with Gertrude McCoy as Lady Hamilton. Five years later, he appeared as Capt. Alfred Dreyfus in a British film on the Dreyfus affair, Dreyfus (F.W. Kraemer, Milton Rosmer, 1931). He also appeared with Esther Ralston and Conrad Veidt in the thriller Rome Express (Walter Forde, 1932) and with Boris Karloff in the British horror film The Ghoul (T. Hayes Hunter, 1933).

On stage and in the cinema, he made such an impression that at age 41 he became the youngest actor to be knighted in the 1934 New Year's Honours. Other stage successes included The Amazing Dr. Clitterhouse, Antigone and A Majority of One, winning a Tony Award nomination for his performance as a Japanese diplomat.

In the cinema he had a hit with the historical drama Nell Gwynn (Herbert Wilcox, 1934) which portrays the historical romance between Charles II of England (Hardwicke) and the actress Nell Gwynn (Anna Neagle). He played in such films as Jew Süss/Power - Jew Suss (Lothar Mendes, 1934) based on Lion Feuchtwanger's novel Jud Süß, about Joseph Süß Oppenheimer played by Conrad Veidt, the American drama Les Misérables (Richard Boleslawski, 1935) and the British adventure film King Solomon's Mines (Robert Stevenson, 1937), starring Paul Robeson. 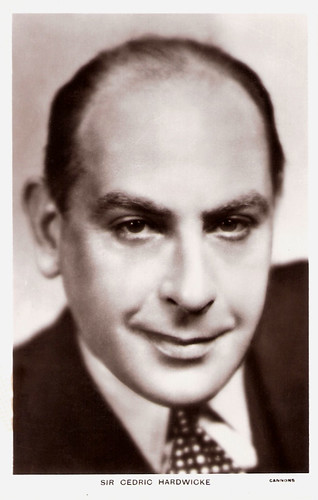 British postcard in the Picturegoer Series, London, no. 535a. Photo: Cannons. 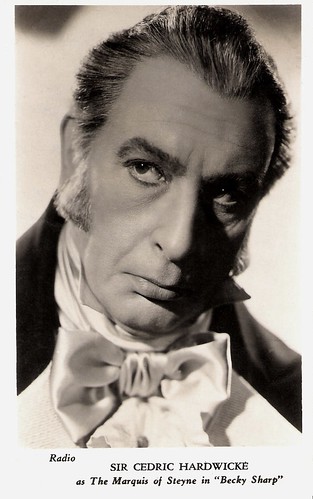 
In the late 1930s, Cedric Hardwicke moved to the US, initially for film work. He was in great demand in Hollywood. He played David Livingstone opposite Spencer Tracy's Henry Morton Stanley in Stanley and Livingstone (Henry King, 1939), and also played Frollo in The Hunchback of Notre Dame (William Dieterle, 1939). Then he played Mr Jones in a screen version of Joseph Conrad's novel Victory (John Cromwell, 1940).

He starred in The Ghost of Frankenstein (Erle C. Kenton, 1942), as the unfortunate Ludwig von Frankenstein, alongside Lon Chaney Jr. and Bela Lugosi. In the early 1940s he also continued his stage career, touring and in New York. In 1944 Hardwicke returned to Britain, again touring, and reappeared on the London stage, at the Westminster Theatre, on 29 March 1945, as Richard Varwell in a revival of Eden and Adelaide Phillpotts' comedy, Yellow Sands, and subsequently toured in this on the continent.

He returned to America late in 1945 and appeared with Ethel Barrymore in December in a revival of Shaw's Pygmalion, and continued on the New York stage the following year. In 1946, he starred opposite Katharine Cornell as King Creon in her production of Jean Anouilh's adaptation of the Greek tragedy Antigone. In 1948 he joined the Old Vic Company at the New Theatre to play Sir Toby Belch, Doctor Faustus, and Gaev in The Cherry Orchard. That year he also appeared in the British film The Winslow Boy (Anthony Asquith, 1948) and in Alfred Hitchcock's Rope (1948).

Then he moved permanently to the US. He was featured as King Arthur in the comedy/musical, A Connecticut Yankee in King Arthur's Court (Tay Garnett, 1949), singing Busy Doing Nothing in a trio with Bing Crosby and William Bendix. In 1951–1952, he appeared on Broadway in Shaw's Don Juan in Hell with Agnes Moorehead, Charles Boyer and Charles Laughton. Later, Hardwicke played in such films as Laurence Olivier's Richard III (1955), and as the Pharaoh Seti I in Cecil B. DeMille's The Ten Commandments (1956).

On TV, he appeared in an episode of Alfred Hitchcock Presents entitled Wet Saturday (1956). During the 1961–1962 television season, Hardwicke starred as Professor Crayton in Gertrude Berg's sitcom Mrs. G. Goes to College. His final acting role was in The Outer Limits in the episode The Forms of Things Unknown.

In 1964, Cedric Hardwicke in New York from cancer. He was 71. He was married twice. In 1928, he married the English actress Helena Pickard. They divorced in 1948. Their son was actor Edward Hardwicke. His second marriage, which also produced one child and ended in divorce, was to Mary Scott, from 1950 to 1961.