Imported from the USA: Kim Hunter

American actress Kim Hunter(1922-2002) had her breakthrough in the cinema with the classic British film A Matter of Life and Death (1946). In 1952 she won an Oscar for her part as Stella in A Streetcar Named Desire (1951). In the McCarthy she was blacklisted as being a Communist sympathizer, but in the 1960s she was cleared from the unjustly accusations. 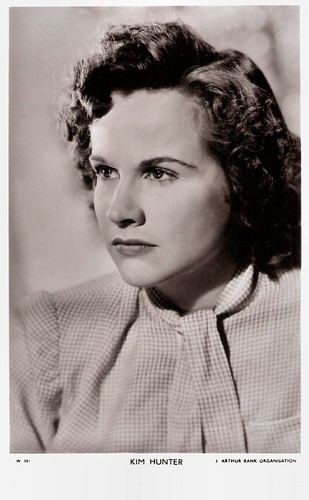 A Matter of Life and Death


Kim Hunter was born as Janet Cole in Detroit, Michigan, USA, in 1922. Her father, Donald Cole, was a consulting engineer, and died in 1926 when Kim was only 3 years old. Her mother, Grace Lind, once performed as a concert pianist. She had one brother who was eight years older than she, and she was educated at Miami Beach High.

According to Joseph Collura in Classic Images, Kim was quiet and painfully shy as a child and overcame it through the guidance of a local dramatics teacher, a Mrs. Carmine. Included were diction, voice and posture lessons. She studied at the Actors Studio and her first professional stage appearance was as Penny in Penny Wise in 1939. Then, she joined a repertory group called Theatre of Fifteen, but it disbanded in 1942 when WWII took away most of its male members.

She was appearing in the 1942 Pasadena Playhouse production of Arsenic and Old Lace when she was discovered by an RKO talent hunter who signed her to a seven-year contract for David O. Selznick's company. Selznick suggested she change her first name to Kim and a RKO secretary suggested the last name of Hunter. She only did loan-outs for the two years she was under contract.

Hunter's first film role as a lone-out was in the Film Noir, The Seventh Victim (Mark Robson, 1943). Her only work inside the Selznick Studio was three days of screen tests for Alfred Hitchcock on Spellbound, sitting in for Ingrid Bergman as actors were tested for minor roles. Even though she was only shot from behind her head, she impressed Hitchcock, who had lunch with her.

A year later he recommended her to Michael Powell and Emeric Pressburger, who cast her in a bit role in the American version of A Canterbury Tale (1944) and then gave her the female lead role opposite David Niven in A Matter of Life and Death (1946). 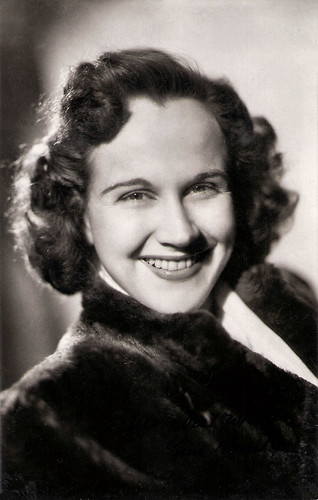 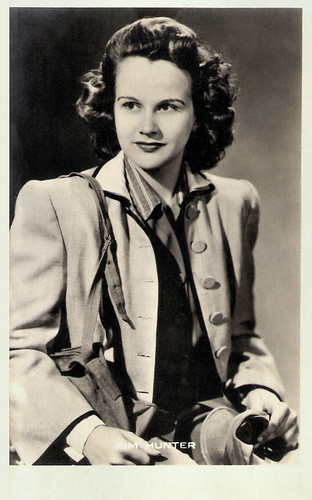 
In 1947, Kim Hunter made her Broadway debut as Stella in A Streetcar Named Desire. The production was the 1947-1948 season's success and for her role she won the Critics Circle and Donaldson awards.

A few years later, Irene Mayer Selznick recommended Kim for her reprise role of Stella opposite Vivien Leigh and Marlon Brando in the film A Streetcar Named Desire (Elia Kazan, 1951), for which she won a Golden Globe and an Oscar as Best Supporting Actress Oscar in 1952. Hunter was in New York rehearsing for the Horton Foote play, The Chas when the Oscar ceremony was held. Bette Davis accepted in her place.

Hunter was a political activist. She signed several civil rights petitions and was a sponsor of a 1949 World Peace Conference in New York. This triggered her label of being a Communist sympathizer, for which she was blacklisted in films and TV even though she never even held pro-Communist views. Her testimony to the New York Supreme Court in 1962 against the publishers of Red Channels helped pave the way for clearance of many performers unjustly accused of Communist connections.

In 1956, she returned to the cinema opposite Bette Davis in Storm Center (Daniel Tarradash, 1956). Other films were The Young Stranger (John Frankenheimer, 1957), and Lilith (Robert Rossen, 1964) with Jean Seberg. She also played Zira, the sympathetic chimpanzee scientist in Planet of the Apes (Franklin J. Schaffner, 1968) and two sequels, but she was mostly seen on stage of on television.

On TV she played a guest starring role in an episode of the action series Baretta (1976), for wich she was nominated for an Emmy award. In 1980, she was also nominated for a Daytime Emmy Award for her work on the long-running soap The Edge of Night.

In the cinema she could be seen in the Italian horror film Due occhi diabolici/Two Evil Eyes (Dario Argento, George A. Romero, 1990) and Clint Eastwood’s Midnight in the Garden of Good and Evil (1997).

Kim Hunter was married twice. In 1944 she married Marine Captain William A. Baldwin, with whom she had a daughter, Kathryn Deirdre Baldwin. They marriage ended in a divorce in 1946. In 1951 she married Robert Emmett, with whom she had a son, Sean Emmett (1954). They stayed married till his death in 2000. Kim Hunter died of a heart attack in 2002 in New York City, some two months shy of her 80th birthday.


Opening sequence of A Matter of Life and Death (1946). Source: crmsonsky (YouTube).