Beautiful stage and film actress Margaret Lockwood (1916-1990) was the female lead of the early Hitchcock classic The Lady Vanishes (1938). In the 1940s she became Britain's leading box-office star specialising in beautiful but diabolical adventuresses. 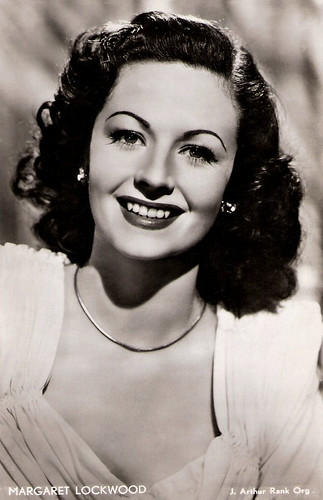 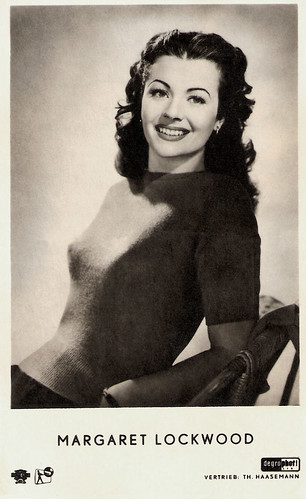 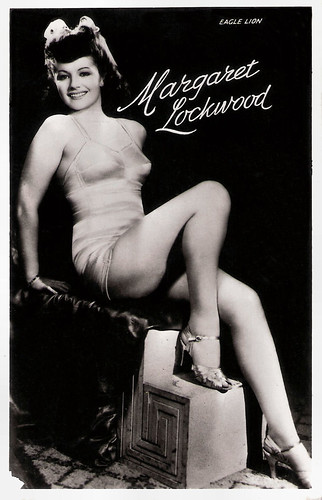 Margaret Mary Lockwood Day was born in Karachi, British India (now Karachi, Pakistan), in 1916. She was the daughter of a English administrator of a railway company and his Scottish wife. Lockwood's family returned to the United Kingdom while she was a child, aged 3.

She began studying for the stage at an early age under Italia Conti, and made her debut in 1928, at the age of 12, at the Holborn Empire, where she played a fairy in A Midsummer Night's Dream. In December of the following year, she appeared at the Scala Theatre in the pantomime The Babes in the Wood. In 1932, she appeared at the Theatre Royal, Drury Lane in Cavalcade.

In 1933, she enrolled at the RADA (Royal Academy of Dramatic Art), where she was seen in Leontine Sagan's production of Hannele by a leading London agent, Herbert de Leon, who at once signed her as a client and arranged a screen test. Director Basil Dean was impressed and gave her the second lead in his film Lorna Doone (1934) when Dorothy Hyson fell ill. She was billed with her stage name Margie Day.

Seven ingenue screen roles followed in ‘quota quickies’ like Someday (Michael Powell, 1935) and Midshipman Easy (Carol Reed, 1935). Then she played opposite Maurice Chevalier in the remake of the musical The Beloved Vagabond (1936, Curtis Bernhardt).

A year later, she married Rupert Leon, a man of whom her domineering mother disapproved strongly, so much so that for six months Margaret did not live with her husband and was afraid to tell her mother that the marriage had taken place. 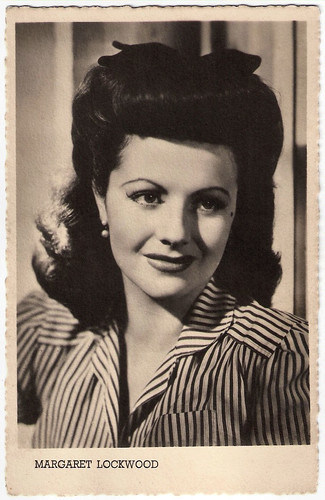 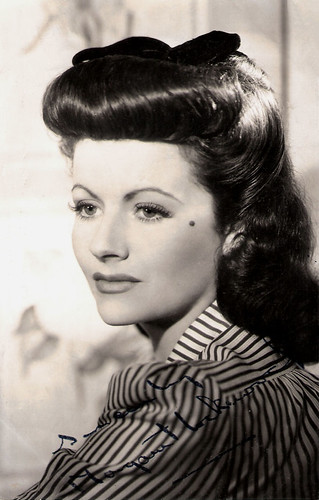 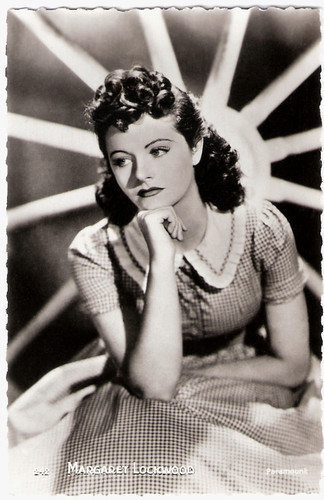 In 1938, Margaret Lockwood's role as a young London nurse in Bank Holiday (Carol Reed, 1938), established her as a star, and her next film would give her even international status.

The Lady Vanishes (Alfred Hitchcock, 1938) offered her a role with teeth. She starred as a rich young playgirl in this glorious comic thriller about a mysteriously disappearing old woman. Her leading man was Michael Redgrave and there was considerable chemistry between the two stars. Hitchcock guides them with never a misstep through a complex script that progresses from very lighthearted to extremely sinister and then back again. The result leaves audiences with both the satisfaction of a well-made thriller and the glow of a romantic comedy. The Gainsborough studio production would be Lockwood’s most successful film of that decade.

A visit to Hollywood to appear with Shirley Temple in Susannah of the Mounties (Walter Lang, William A. Seiter, 1939) and with Douglas Fairbanks Jr. in Rulers of the Sea (Frank Lloyd, 1939) was not at all to her liking.

She returned with relief to Britain to star in two of Carol Reed's best films, The Stars Look Down (1940), as the self-centred, frivolous wife of Michael Redgrave's character, and the Oscar nominated spy thriller Night Train to Munich (1940), opposite Rex Harrison.

In 1941, she gave birth to a daughter by Leon, Julia Lockwood, affectionately known to her mother as ‘Toots’, who was also to become a successful actress. The Leons separated soon after her birth and were divorced in 1950. Lockwood gained custody of her daughter, but not before Mrs. Lockwood had sided with her son-in-law to allege that Margaret was ‘an unfit mother’. 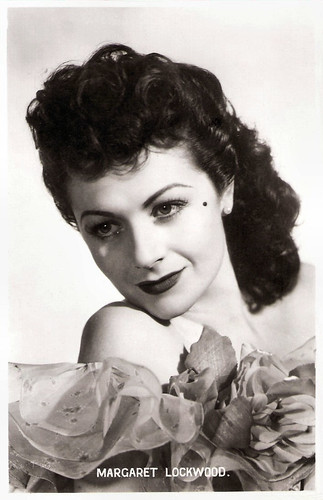 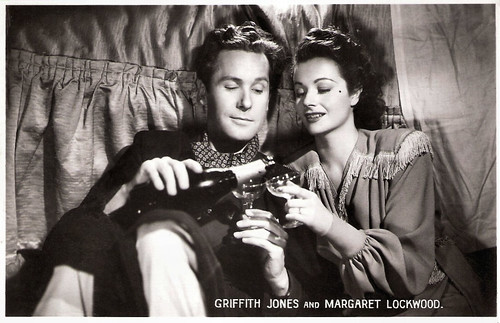 British postcard by Real Photograph, no. F.S. 27. Photo: publicity still for Look Before You Love (Harold Huth, 1948) with Griffith Jones.

In the early 1940s, Margaret Lockwood changed her on-screen image. The turning point in her career came in 1943, when she was cast opposite James Mason in the Gainsborough melodrama The Man in Grey (Leslie Arliss, 1943). She played an amoral schemer who steals the husband of her best friend, played by Phyllis Calvert, and then ruthlessly murders her.

Spectral in black, with her dark, dramatic looks, cold but beautiful eyes, and vividly overpainted thin lips, Lockwood was queen among villainesses. The film inaugurated a series of hothouse melodramas that came to be known as Gainsborough Gothic and had film fans queueing outside cinemas all over Britain.

Her greatest success was in the title role of The Wicked Lady (Leslie Arliss, 1945), again opposite Mason. In this outrageous adventure film she played the ultimate in murderous husband-stealers, Lady Skelton, who amuses herself at night with highway robbery.

The amount of cleavage exposed by Lockwood's Restoration gowns caused consternation to the film censors, and apprehension was in the air before the premiere, attended by Queen Mary, who astounded everyone by thoroughly enjoying it. In 1946 Lockwood gained the Daily Mail First Prize for most popular British film actress. 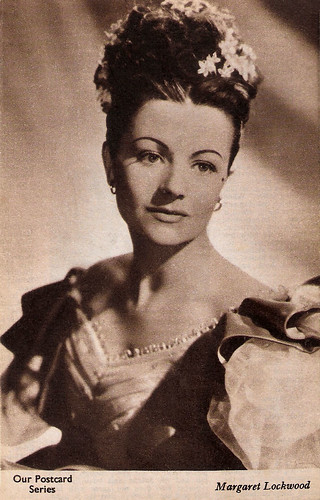 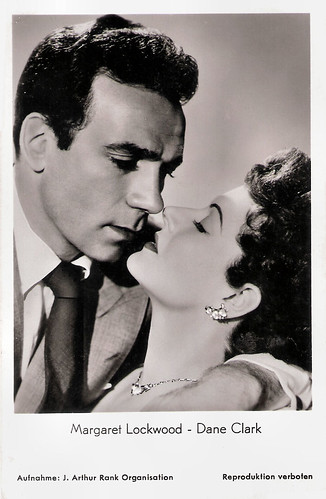 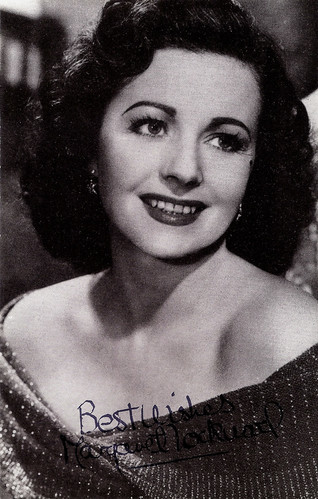 She complained to the head of her studio, J. Arthur Rank, that she was ‘sick of sinning’, but paradoxically, as her roles grew nicer, her popularity declined. Her contract with Rank was dissolved in 1950 and a film deal with Herbert Wilcox, who was married to her principal cinema rival, Anna Neagle, resulted in three disappointing flops.

In 1955, she gave one of her best performances, as a blowsy ex-barmaid in Cast a Dark Shadow (Lewis Gilbert, 1955), opposite Dirk Bogarde, but her box office appeal had waned and she left the screen in favour of the stage. She had success in Peter Pan, Pygmalion, Private Lives, and Agatha Christie's thriller Spider's Web, which ran for over a year. In 1965, she co-starred with her daughter Julia in a popular television series, The Flying Swan.

She lived for many years with actor John Stone, who appeared with her in the 1959 play, And Suddenly It's Spring, and the TV series Justice (Alan Bromly, Brian Farnham, 1971-1974) in which she played a lady barrister. In 1976 she made a long overdue return to films in the Cinderella musical, The Slipper and the Rose (Bryan Forbes, 1976) as the stepmother with the sobriquet, ‘wicked’, omitted but implied.

Her final stage appearance, as Queen Alexandra in Motherdear, ran for only six weeks at the Ambassadors' Theatre in 1980. That year she was created a CBE (Commander of the order of the British Empire). Her investiture at Buckingham Palace was her last public appearance. She was accompanied by her three grandchildren. Margaret Lockwood lived her final decade in seclusion and died in 1990 in Kingston upon Thames, UK, from cirrhosis of the liver, aged 73. Books on Lockwood's career include her own autobiography Lucky Star (1955) and Hilton Tims' Once a Wicked Lady (1989).


Trailer for The Man in Grey (1943). Source: LittleShoeMaker (YouTube).

Your blog is quite the go-to source for all you want to know about the stars personal lives and career. Very well done!

Margareth Lockwood is wonderful. Congratulations for the post.
Drop by my blog. Leave comments, become a follower. I'll be happy.
Hugs. Thanks.