Paula Wessely (1907-2000) reigned as Austria’s most distinguished and beloved stage and screen actress almost from her debut at the Vienna Volkstheater in 1924 until her retirement in 1987. She was also criticised for her appearance in the Nazi-propaganda film Heimkehr/Homecoming (1941). 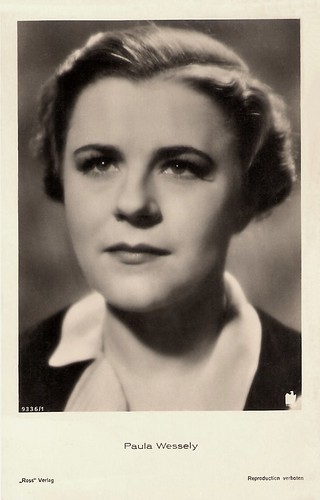 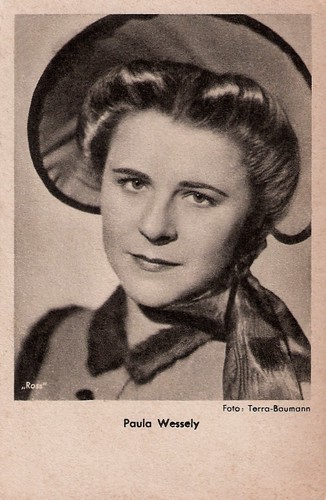 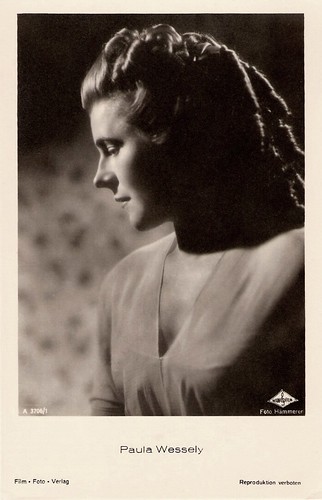 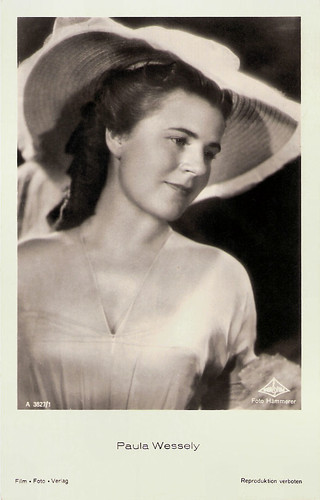 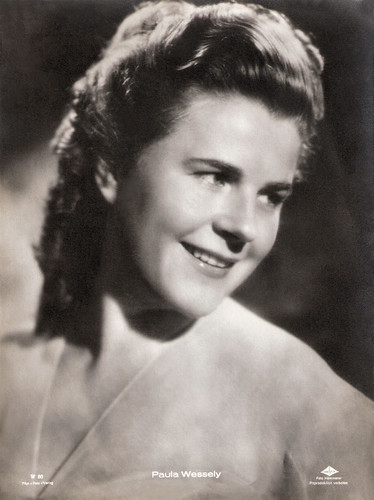 Not the typical film beauty


Paula Anna Maria Wessely was born in Vienna, Austria-Hungary, now Austria, in 1907. She was the second daughter of butcher and theatre enthusiast Carl Wessely and his wife Anna Wessely-Orth. Carl Wessely’s elder sister, Josephine Wessely was an admired and successful actress of the Burgtheater in Vienna, when she died in 1887, only 27 years old.

Paula studied acting at the famous Max-Reinhardt-Seminar. In 1924, she made her debut at the Wiener Volkstheater, but she first came to attention in 1929 at the popular Theater in der Josefstadt under the direction of Max Reinhardt.

Three years later followed her breakthrough as Rose Bernd in the play by Gerhart Hauptmann. Other great stage roles were the title role in the operetta Sissy (1932) by Fritz Kreisler, Christine in the first presentation of Liebelei (Flirtation, 1933), and Gretchen in Goethe's Faust (1933) at the Salzburger Festspiele (The Salzburg Festival).

Although she was not the typical film beauty, she starred in many films. Her first major screen role was Leopoldine Dur in Maskerade/Masquerade in Vienna (Willi Forst, 1934) at the side of Adolf Wohlbrück (aka Anton Walbrook). This social comedy set in turn-of-the-century Vienna with big ball scenes was a huge success and it made Wessely one of the first stars of the Austrian stage who made a successful transition to the cinema.

The next year followed Episode (Walter Reisch, 1935), for which she won the Coppa Volpi award for Best Actress at the Venice Film Festival. Other films like Ernte/Harvest (Géza von Bolváry, 1936) and Spiegel des Lebens/Life's Mirror (Géza von Bolváry, 1938) made her a big film star of the German language cinema. Wessely was known for her sense of pathos and gentle comedy and made several appearances in musical romances. 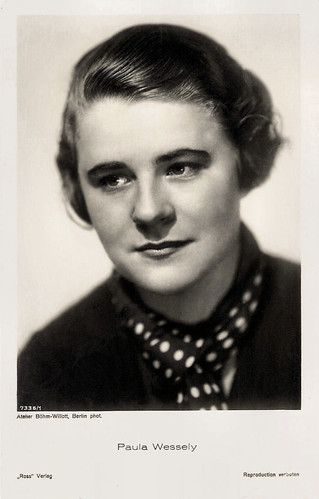 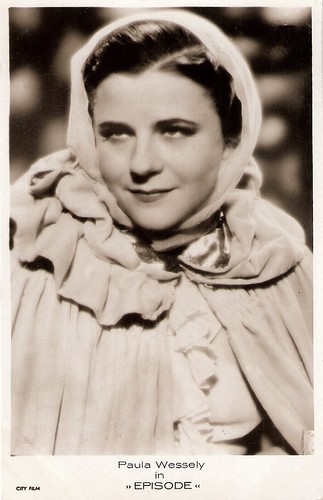 Dutch postcard by M. B. & Z (M. Bonnist & Zonen, Amsterdam). Photo: City Film. Publicity still for Episode (Walter Reisch, 1935). This postcard has at the backside an advertisement for the presentation of Episode at the Harmonie Bioscoop, Tilburg. 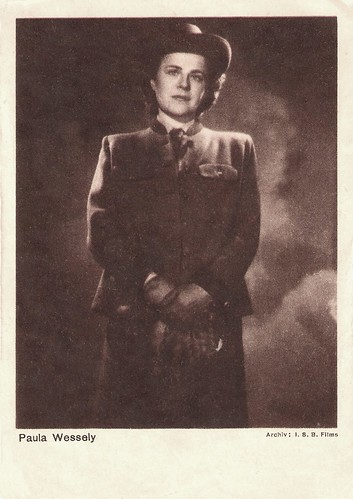 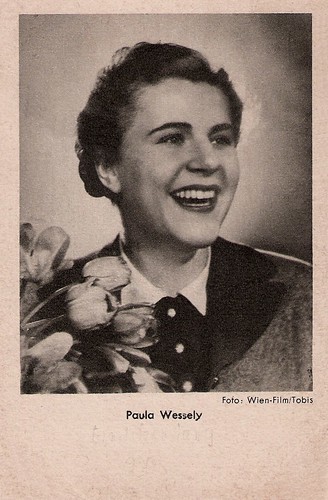 
After the Anschluss of Austria in 1936, Paula Wessely became one of the most popular actresses of the Third Reich. She was affectionately called ‘Die Wessely’ by her fans. Her career thrived under Nazi rule when she starred in many projects produced under the aegis of Nazi propaganda minister Joseph Goebbels and his aides.

After the war she was accused of being a voluntary tool of the Nazis. The role she was most resented for was the lead in the anti-Polish propaganda film Heimkehr/Homecoming (Gustav Ucicky, 1941). The Americans gave her a Berufsverbot. She fell into a severe depression and was treated in a hospital. In interviews she later told that she regretted to have appeared in Heimkehr.

In 1947 she was allowed to continue her career on the Vienna stages and her fans had remained faithful to her. She was given a surprising role in the film Der Engel mit der Posaune/The Angel with the Trumpet (Karl Hartl, 1948) as a half-Jewish woman who ultimately fell victim to the Nazis. The book's author, Ernst Lothar, later wrote in his autobiography, Das Wunder des Überlebens , (The Wonder of Survival) that the Americans wanted Wessely for this role as a means of restoring her acting career: they considered the film a vehicle for helping Austrians to overcome the past. The filming promoted reconciliation over the settling of accounts. It worked.

At Film Reference, reviewer Gertraud Steiner Daviau writes: "The splendid performance of Paula Wessely also leads the film in the direction of the usual lighthearted Viennese film; Henriette appears as a positive heroine, which she definitely is not in Lothar's novel. Most viewers therefore accept the film as a generational love story set in Old Vienna rather than as a mirror of the darker side of the Austrian soul and of Austrian history."

During the 1950s Wessely had also success as a producer of her own films with her production company Paula-Wessely-Filmproduktion. To her successes belong Cordula (Gustav Ucicky, 1950), Maria Theresia (Emil E. Reinert, 1951), Der Weg in die Vergangenheit (Karl Hartl, 1954) opposite Willy Fritsch and Willi Forst, and Die unvollkommene Ehe/The Incomplete Marriage (Robert A. Stemmle, 1959) with Johannes Heesters.

In 1957 she appeared in the gay-themed film Anders als du und ich/The Third Sex (Veit Harlan, 1957) as the mother of Christian Wolff. Reportedly, heavy censorship turned the initial fairly positive theme of the film in a negative anti-gay message. The film is now a notorious curiosity in the history of the gay and lesbian cinema.

Her last film was Jedermann/Everyman (Gottfried Reinhardt, 1961) with Walter Reyer. Besides her film work, Wessely had a glittering career at the Vienna Burgtheater, where she worked since 1953 until her retirement. She was seen as the incarnation of the melancholy and the charm of an entire nation. During her career she won many prizes, including the Bambi award in 1962 and the Filmband in Gold in 1984 for her long and outstanding contributions to the German cinema.

Attila Hörbiger died in 1987, aged 91, of a stroke. Thereafter, the 'doyenne of the Vienna Burgtheater' retired at the age of 80. In her last years she lived a very secluded life in her hometown Vienna and suffered from a major depression, caused by the death of her beloved husband. They were married for 52 years. Paula Wessely died in 2000 at the venerable age of 93 in a hospital in Vienna. 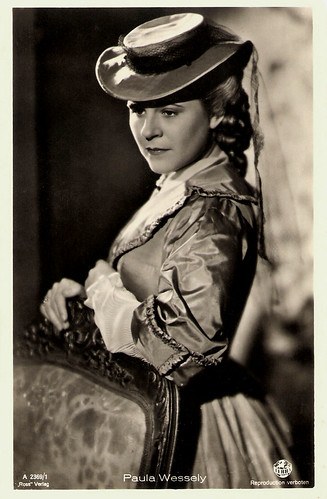 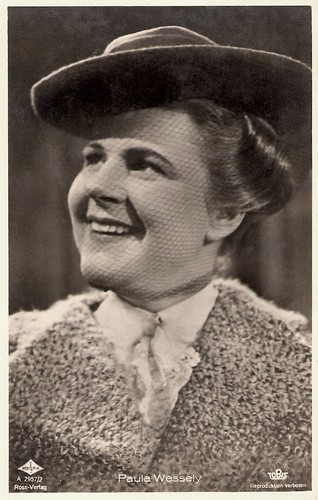 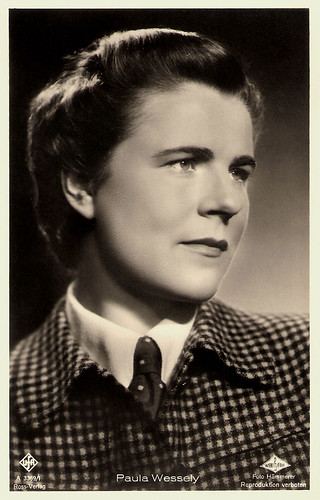 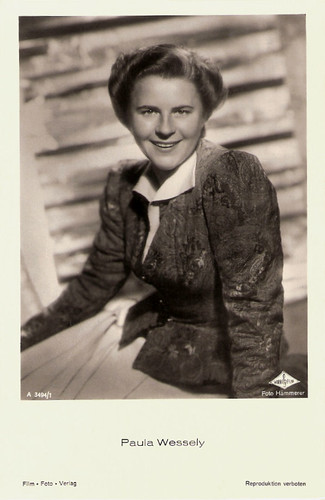 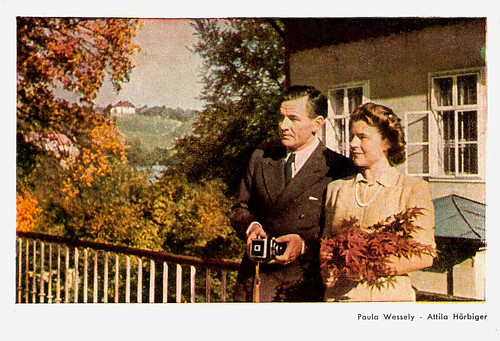