It's Boekenweek, the national Book Week in the Netherlands. Today, Die van Carrell is presented, a new, Dutch biography on television show master, actor and singer Rudi Carrell (1934-2006), written by his daughter Caroline Kesselaar. After his breakthrough in the Dutch show business, Carrell went to Germany where he gained enormous popularity on television. He was the first presenter to attract a TV audience of 20 million Germans, one quarter of the total population. He also acted in several German films. Nowadays, Carrell is seen as one of the greatest TV entertainers in Europe. The well-written memoir by his youngest daughter presents an interesting, intimate view of her talented, humorous but often unreachable father. Several postcards from this EFSP post are used for a small exhibition around the book in Athenaeum Boekhandel, Amsterdam's most prominent bookshop. 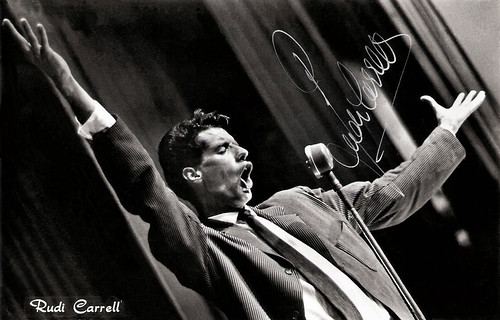 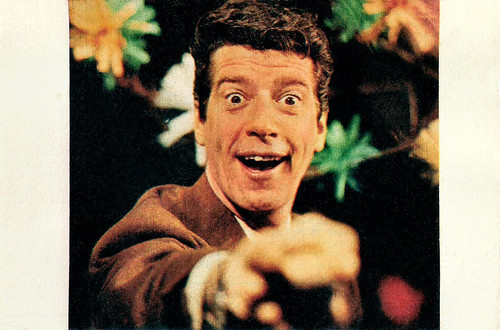 Rudi Carrell was born as Rudolf Wijbrand Kesselaar in Alkmaar, the Dutch cheese capital, in 1934. He was the eldest of four children of Andries Kesselaar and his wife Catharina Houtkooper.

His father was an entertainer with the stage name André Carrell, his grandfather was a comic. By the time Rudi was 17, he was an accomplished magician and ventriloquist. In 1953 Rudi was deputising for his father when André had double booked himself.

Rudi made an effortless transition from stage to studio and in 1959 he hosted his own TV show, the Rudi Carrell Show. In 1960 he represented the Netherlands at the Eurovision Song Contest with the song Wat een geluk/How Lucky and finished 12th out of 13 scoring just 2 points.

He had more luck as a show master. In 1963 he won the Nipkov Award of the Dutch TV critics and in 1964 an episode of the Rudi Carrell Show won the prestigious Silver Rose at the Montreux Television Festival. This episode was shot on an artificial, uninhabited island, where Robinson Crusoe (Carrell) and his monkey Friday get a visit from a mermaid, played by singer Esther Ofarim.

The success of the show led him to Germany in 1965, where he would host the Rudi Carrell Show and many other shows until 2002. His work ranged from game shows, through comedy, variety, and current affairs. His timing and his perfect mastery of the script made him the darling of German audiences. His show was also pretty popular in some other European non-German speaking countries like Slovenia. 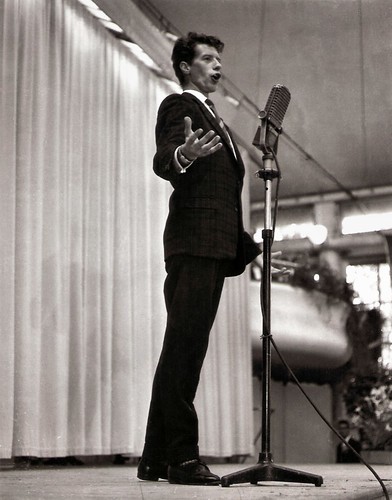 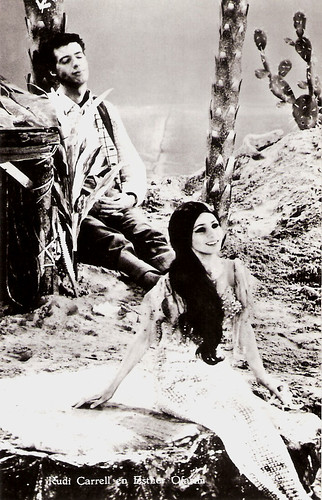 Dutch postcard by Int. Filmpers, Amsterdam, no. 1178. Photo: Phonogram. Still from the episode of the Rudi Carrell Show which won the Silver Rose award of the Montreux television festival 1964. Carrell as Robinson Crusoe who gets a visit from mermaid Esther Ofarim. 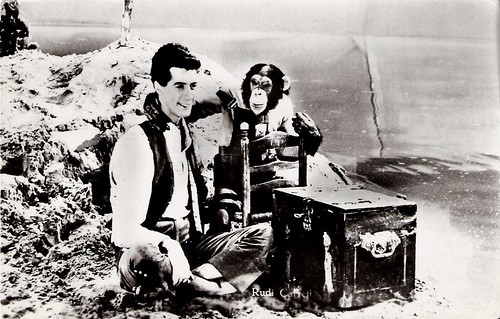 Dutch postcard by Phonogram / Gebr. Spanjersberg N.V., Rotterdam (SPARO), no. 1210. Photo: still from the episode of the Rudi Carrell Show that won the prestigious Silver Rose of the Montreux Television Festival 1964. Robinson Crusoe (Carrell) and his monkey Friday.

In those film comedies he was called ‘Der Rudi’, as he was in real life referred to in every pub and café.

The comedies attracted good audiences, but after 1973 Carrell only incidentally made a film, such as Starke Zeiten/Heavy Times (Rolf Olsen a.o., 1988).

He was also a pop singer with a number of hits. Wann wird`s mal wieder richtig Sommer?/When Will It Be A Real Summer Again? became a big hit in 1975. It was based on the American hit song City of New Orleans by Steve Goodman and made famous by Arlo Guthrie. 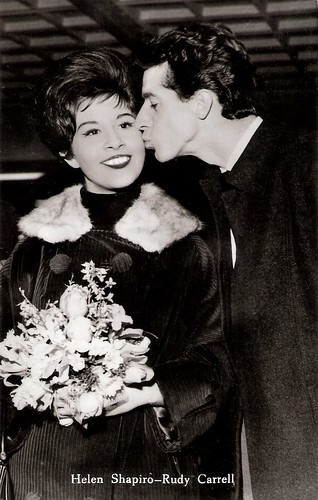 With Helen Shapiro. Dutch postcard by Sparo (Gebr. Spanjersberg N.V., Rotterdam). Sent by mail in the Netherlands in 1966. Photo: Columbia. 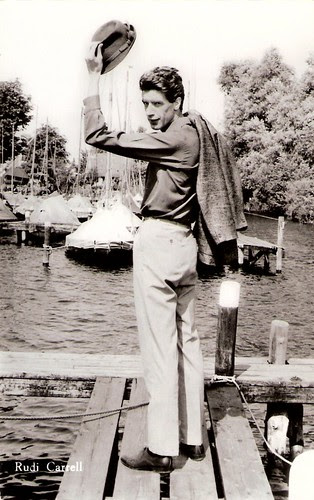 Dutch postcard by Hercules, Haarlem, no. 852. 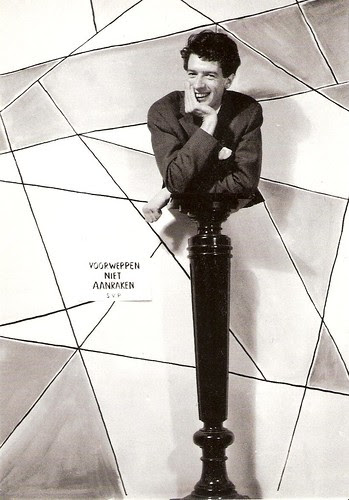 A sketch on Rudi’s Tagesshow/Rudi's Daily Show (1984) provoked a serious diplomatic incident with Iran. A crowd of women threw bras and knickers at a mock-up of the Ayatollah Khomeini, at that time Iran’s spiritual as well as lay leader. The outrage in Tehran brought thousands on to the streets, led to the expulsion of two German diplomats, the closure of the Iranian consulates in Berlin, Hamburg and Frankfurt, the cancellation of flights between Bonn, then the West German capital, and Tehran.

An intervention from the then Dutch Foreign Minister stopped the scene being repeated on Dutch television. Carrell came under threat from fundamentalists, until he officially apologized in 1987.

He received many awards in the Netherlands and Germany, amongst others the Bundesverdienstkreuz (the only award given by the Federal Republic of Germany, for extraordinary achievements in politics or culture) in 1985.

Although living and working in Germany for 40 years he always spoke with a heavy Dutch accent. He smoked 60 cigarettes a day, and in 2005 he had lung cancer diagnosed. In a farewell TV appearance in 2006 he was presented with Germany’s highest TV award, the Golden Camera. He also received the Bundesverdienstkreuz, Germany's Cross of Merit, for his achievements in German-Dutch relations in 1985, and he was given the Honorary Rose at the Festival of Montreux for his lifetime achievements in 2001.

Rudi Carrell died in 2006 in Bremen, Germany. He was 71. He had been married three times. His wives were Truus de Vries (1957-1973) with whom he had two children, Annemieke and Caroline; Anke Bobbert (1974-2000) with whom he had a son, Alexander; and Simone Felischak (2002-2006). Caroline's book Die van Carrell will be presented today in Boekhandel feijn in Rudi Carrell's birthplace Alkmaar. 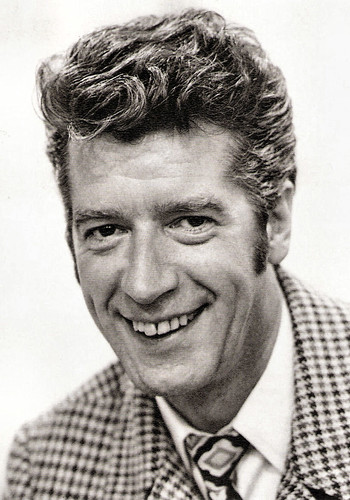 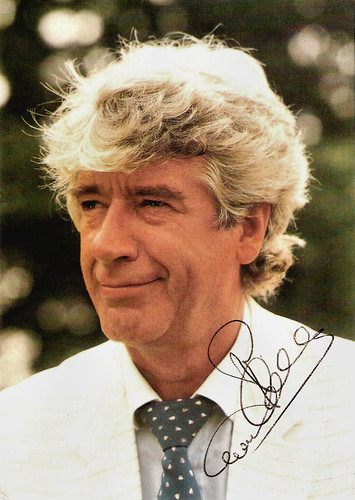 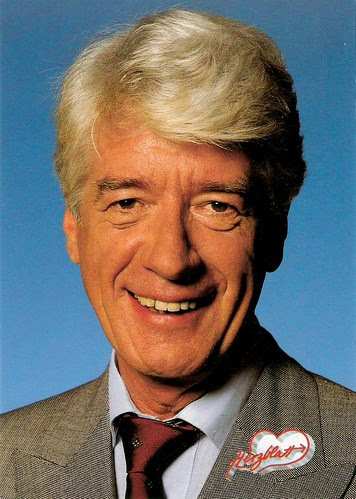 Good to see your post mentioning the Rudi Carrell version of "City of New Orleans" by Steve Goodman. He often doesn't get his due. You might be interested in my 800-page biography, "Steve Goodman: Facing the Music." The book delves deeply into the genesis of "City of New Orleans," and Arlo Guthrie is a key source among my 1,050 interviewees and even contributed the foreword.

You can find out more at my Internet site (below). Amazingly, the book's first printing sold out in just eight months, all 5,000 copies, and a second printing of 5,000 is available now. The second printing includes hundreds of little updates and additions, including 30 more photos for a total of 575. It just won a 2008 IPPY (Independent Publishers Association) silver medal for biography: http://www.independentpublisher.com/article.php?page=1231. To order a second-printing copy, see the "online store" page of my site. Just trying to spread word about the book. Feel free to do the same!

I really enjoy the stories that 'go-with'!