Film director Guy Hamilton, born 16 September 1922; died 20 April 2016. He was one of Britain’s most bankable film-makers with four James Bond films – Goldfinger (1964), Diamonds Are Forever (1971), Live and Let Die (1973) and The Man With the Golden Gun (1974) – among his credits. Today a post on our favourite. Goldfinger is the quintessential episode in the James Bond series, filled with thrills, girls and danger. It was the third episode and the third to star suave and ultra-cool Sean Connery as agent 007. Everything seemed to be right, the stunts, the sets, the score, the gadgets, and a wonderful cast. The film co-stars Honor Blackman as Pussy Galore, Gert Fröbe as Auric Goldfinger, and Shirley Eaton as the iconic Bond girl Jill Masterson. 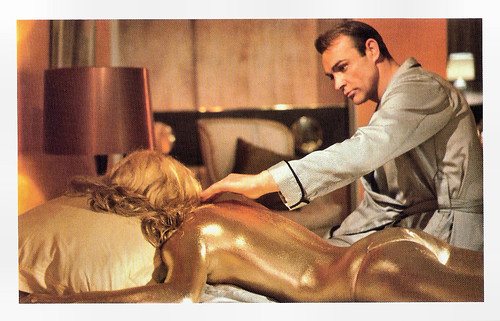 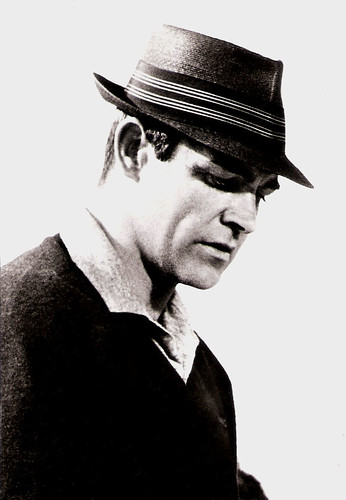 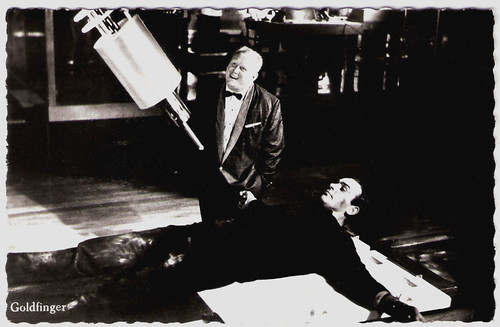 Dutch postcard. Sent by mail in 1966. Publicity still for Goldfinger (1964) with Sean Connery and Gert Fröbe. "Do you expect me to talk, Goldfinger?" Bond asks as the laser beam slowly makes its way towards his groin. "No, Mr. Bond, I expect you to die!" Goldfinger answers.

Not inside Fort Knox

Goldfinger was based again on a novel by Ian Fleming. There isn't much of a plot, really. James Bond is investigating gold smuggling by gold magnate Auric Goldfinger and eventually uncovering Goldfinger's plans to contaminate the Fort Knox gold reserve.

Producers were Albert R. Broccoli and Harry Saltzman. Goldfinger had what was then considered a large budget of $3 million (US$22,812,232 in 2015 dollars), the equivalent of the budgets of Dr. No (Terence Young, 1962) and From Russia with Love (Terence Young, 1963) combined, and was the first James Bond film classified as a box-office blockbuster.

Goldfinger saw the return of two crew members who were not involved with From Russia With Love: stunt coordinator Bob Simmons and production designer Ken Adam. Both played crucial roles in the development of Goldfinger. Simmons choreographed the fight sequence between Bond and Oddjob (Harold Sakata) in the vault of Fort Knox, one of the best Bond fights.

For security reasons, the filmmakers were not allowed to film inside Fort Knox, although exterior photography was permitted. All sets for the interiors were designed and built from scratch at Pinewood Studios. The filmmakers had no clue as to what the interior of the depository looked like, so Ken Adam's imagination provided the idea of gold stacked upon gold behind iron bars. Harry Saltzman disliked the design's resemblance to a prison, but Guy Hamilton liked it enough that it was built. The comptroller of Fort Knox later sent a letter to Adam and the production team, complimenting them on their imaginative depiction of the vault.

Principal photography took place from January to July 1964 in the United Kingdom, Switzerland and the U.S. states of Kentucky and Florida. The opening credit sequence was designed by graphic artist Robert Brownjohn, featuring clips of all James Bond films thus far projected on actress Margaret Nolan's body. Its design was inspired by seeing light projecting on people's bodies as they got up and left a cinema. Brownjohn was also responsible for the posters for the advertising campaign, which also used Nolan. 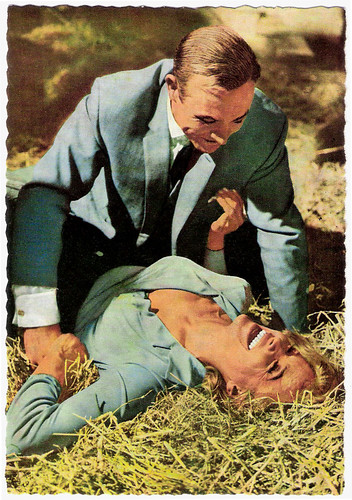 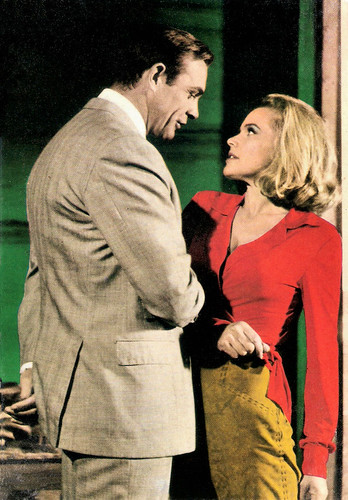 Honor Blackman played Pussy Galore, Goldfinger's personal pilot and leader of an all-female team of pilots known as Pussy Galore's Flying Circus. Blackman was selected for the role of Pussy Galore because of her role as Cathy Gale in the classic British TV series The Avengers (1962-1964) and the script was rewritten to show Blackman's judo abilities. The character's name follows in the tradition of other Bond girls names that are double entendres. During promotion, Blackman took delight in embarrassing interviewers by repeatedly mentioning the character's name.

Gert Fröbe was excellent as Bond villain Auric Goldfinger, the 'international cheat, international menace' obsessed with gold. Orson Welles was considered as Goldfinger, but his financial demands were too high. Fröbe was cast because the producers saw his performance as a child molester in the German film Es geschah am hellichten Tag/It Happened in Broad Daylight (Ladislao Vajda, 1958). Fröbe, who spoke little English, said his lines phonetically.

British actress Shirley Eaton played Jill Masterson, Bond Girl and Goldfinger's aide-de-camp. Bond catches her helping the villain cheat at a game of cards. He seduces her, but for her betrayal, she is completely painted in gold paint and dies from "skin suffocation". Although only a small part in the film, the image of her painted gold was renowned and Eaton graced the cover of Life magazine of 6 November 1964.

And Goldfinger was also the first of the Bond films to feature Q (Desmond Llewelyn). In From Russia with Love (Terence Young, 1963) Llewelyn had played the role of Major Boothroyd. Q became the beloved comic relief figure of the series and Llewellyn appeared in 17 James Bond films until his death in 1999. He was absent in Live and Let Die (Guy Hamilton, 1973), because producers felt too much attention was being paid on the gadgetry so they downplayed it by cutting his role. However, audiences enjoyed Q so much that Llewelyn was brought back indefinitely. 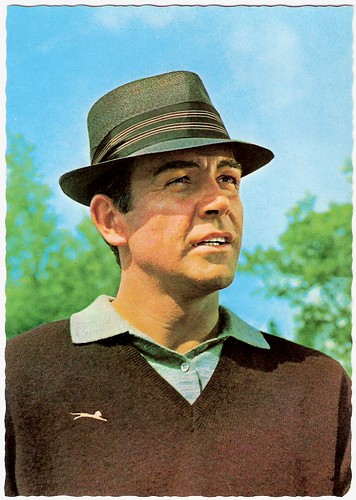 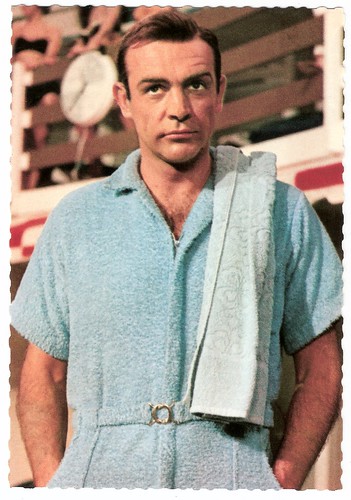 Goldfinger began to up the ante

Shirley Bassey sang the theme song Goldfinger, and she would go on to sing the theme songs for two other Bond films, Diamonds are Forever (Guy Hamilton, 1971) and Moonraker (Lewis Gilbert, 1979). The song was composed by John Barry, with lyrics by Anthony Newley and Leslie Bricusse.

Goldfinger was the first of the series to feature the famous line, "Bond, James Bond," as a 007 catchphrase. It also featured the most famous James Bond car, the 1964 silver birch Aston Martin DB5, was introduced in Goldfinger. To promote the film, the two Aston Martin DB5s were showcased at the 1964 New York World's Fair. It was dubbed 'the most famous car in the world', and sales of the car rose.

Goldfinger became the first Bond film to win an Academy Award. At the 1965 Academy Awards, Norman Wanstall won the Academy Award for Best Sound Effects Editing for his work. Ken Adam was nominated for the British Academy of Film and Television Arts (BAFTA) for Best British Art Direction (Colour). The film opened to largely favourable critical reception and was a financial success. Goldfinger‍ '​s $3 million budget was recouped in two weeks, and it broke box office records in multiple countries around the world.

What a wonderful collection. My husband LOVED Sean Connery. He could imitate him to a fault. :D I had a collection of all the James Bond books at one time. Alan's best buddy Roy loved James Bond, too--so I sent them all to him. Thank you for this trip down memory lane, Paul! Happy Postcard Friendship Friday!

I remember this movie with Sean Connery at the drive-in theater!!! Yikes! That was a long time ago.... Sean Connery will always be my favorite BOND! Thanks for a great post!