Madeleine Renaud (1900-1994) was an acclaimed French stage actress, who also had a career in film. One of her best known films was La Maternelle (1933) about a Montmartre kindergarten. With her second husband, actor Jean-Louis Barrault, she formed the celebrated Compagnie Renaud-Barrault theatrical troupe in 1948. 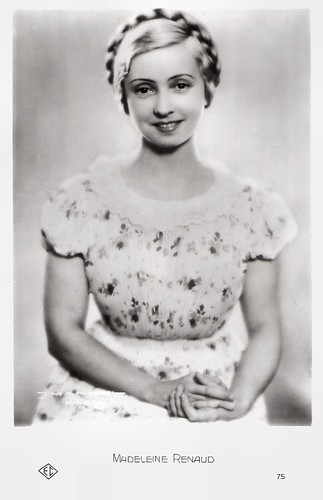 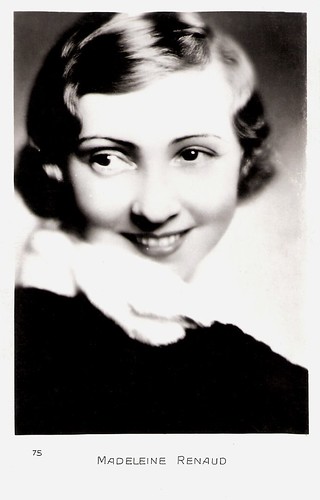 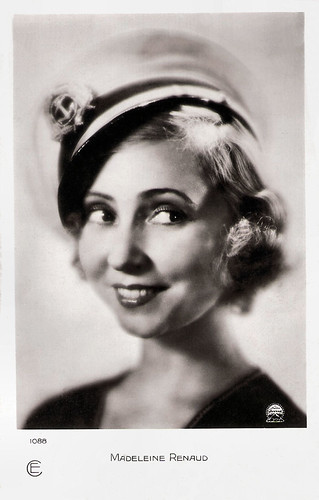 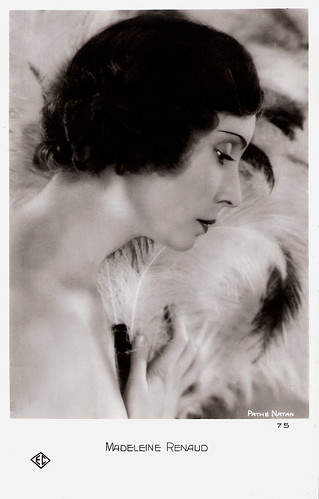 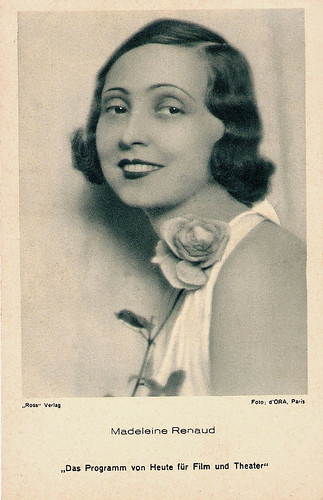 Lucie Madeleine Renaud was born in 1900 as the daughter of a university professor, in the elegant seizieme arrondissement of Paris. She attended the Conservatoire Nationale d'Art Dramatique, having previously studied at the Lycee Racine, where she won first prize for comedy and obtained her baccalaureate.

At age 21, she entered the prestigious Comédie-Française as a junior actress, shedding her bourgeois background and starting an independent career. She remained there under contract until 1947.

In his obituary for The Independent, John Calder wrote: "Madeleine Renaud was the last of the great school of French classical actresses. She was trained just after the First World War, and had the flexibility to perform in the grand manner the established French repertoire, from Racine to Giraudoux, while still being totally convincing in the different schools of international theatre that have emerged since 1950.

Her early career overlapped with the last years of Sarah Bernhardt's and she was already a star in the 1920s - before Edwige Feuillère, Maria Casares, Suzanne Flon and Arletty dominated the boards in Paris. By the time her juniors by a decade Michèle Morgan and Simone Signoret emerged, Renaud had established herself as one of the finest French actresses."

She incidentally played parts in silent films, such as the female leads in the films Vent debout/Midship (René Leprince, 1923) with Léon Mathot, and La terre qui meurt/The Land That Dies (Jean Choux, 1926), but her film performances intensified when sound cinema came along. She became an active and popular film actress of the 1930s.

Her first sound film was Jean de la Lune/Moon-Struck Jean (Jean Choux, 1930). This was an adaptation of a stage play by Marcel Achard, in which Renaud played with René Lefèvre and Michel Simon. During the 1930s Renaud played in some twenty films, often adaptations of novels and stage plays, contributing with her allure and liveliness.

One of her best known parts was the lead in the endearing film La Maternelle/Children of Montmartre (Jean-Benoit Lévy, Marie Epstein, 1933), a good example of French social realism of the 1930s. Renaud played Rose, a girl who becomes world wise when her father goes bankrupt and dies, and her lover dumps her. Rose becomes the caring maid in a Montmartre kindergarten and is soon the darling of the children, especially a prostitute’s daughter named Marie (Paulette Elambert), whose mother has dumped her as well. Marie, though, becomes jealous of other people caring about Rose. 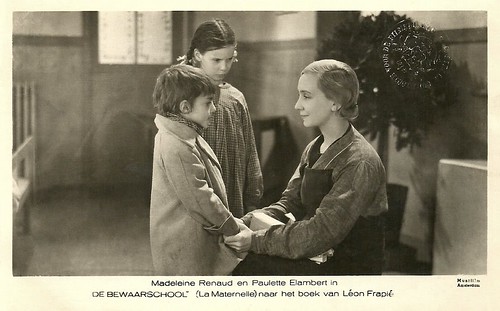 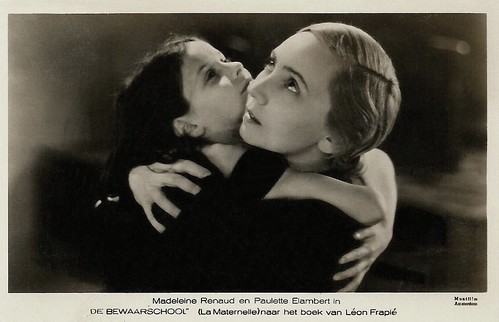 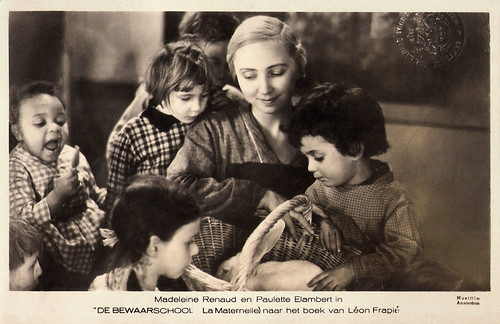 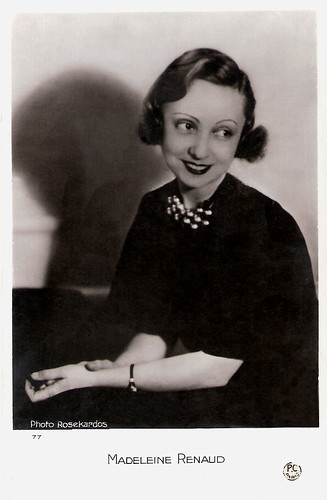 Other memorable film titles of the 1930s in which Madeleine Renaud played leads were Le tunnel/The Tunnel (Curtis Bernhardt, 1933) with Jean Gabin working on a tunnel between the US and Europe (!); Maria Chapdelaine (Julien Duvivier, 1934) with Renaud as a young woman fighting both the elements and suitors in Canada.

After the war she concentrated on theatre, though she occasionally returned for roles as the savoury Mme Tellier in Le plaisir/House of Pleasure (Max Ophüls, 1952) based on three stories by Guy de Maupassant, and the malicious noblewoman in Le diable par la queue/The Devil by the Tail (Philippe de Broca, 1969) opposite Yves Montand.

Along with several other noted French actors, Madeleine Renaud appeared in a cameo role in the mammoth, all-star re-creation of the D-Day invasion, The Longest Day (Ken Annakin, Andrew Marton, Bernhard Wicki, 1962), playing a fearless Mother Superior. One of her final film roles was the possessive mother of Jean-Pierre Aumont in Des journées entières dans les arbres/Entire Days Among the Trees (Marguerite Duras, 1976). 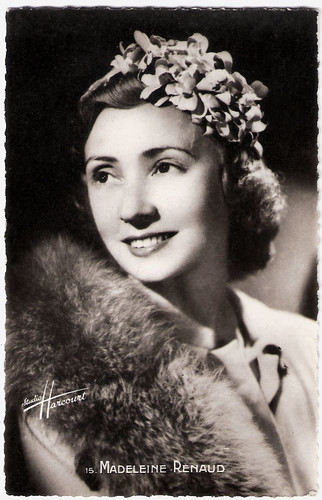 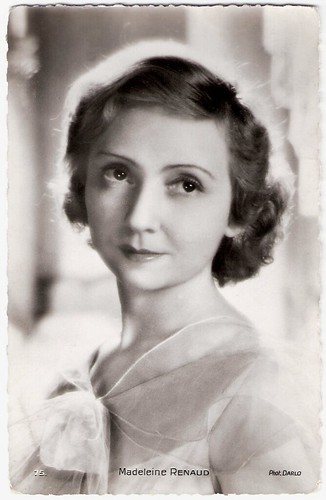 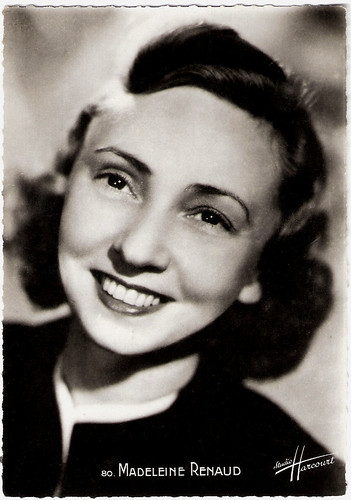 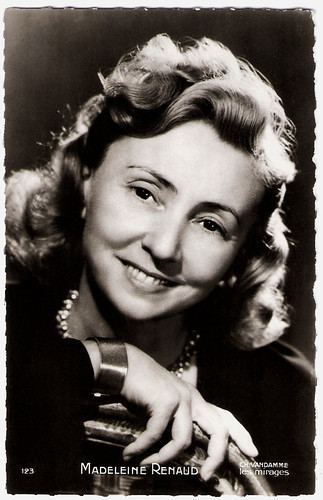 In 1936 Madeleine Renaud had met her future husband, actor and director Jean-Louis Barrault, a brilliant young actor from a working-class background, full of new theatrical ideas and aflame with ambition. In 1940, he joined the Comédie-Francaise and in a very short time he was playing major roles and directing productions. They fell in love and married the same year.

In 1943 the couple worked together in raising the play Soulier de satin (Satin Shoe) by Paul Claudel, directed by Barrault. After having played 127 parts at the Comédie-Française, Renaud left the company in 1946 to form her own company with Barrault, which was based at the Théâtre Marigny.

There she created the part of Winnie in Oh! Les beaux jours (Happy Days) by Samuel Beckett in 1963; it was a part she would continue to perform until the end of her career. Renaud also played in plays by Jean Genet, Marguerite Duras, and Eugène Ionesco.

In the mean time, her husband Barrault rose to the position of managing director of the Théâtre de l'Odéon-Théâtre de France. After the student revolt of 1968, Barrault, having shown sympathy for the students was evicted from the Odéon by President de Gaulle. The company rented an old skating rink and continued to perform there, mainly in the round, improvising and making virtues out of necessity. The public supported the new theatre massively.

For a while Madeleine Renaud went away from the company to play next to Claude Régy in L'Amante anglaise (The English Lover) by Marguerite Duras. Afterwards she played Maud in Harold et Maud (Harold and Maude) written by Colin Higgins, a role to which she stuck for a long time, also when the company moved to the Musée d'Orsay, and afterwards to the Théâtre du Rond-Point.

Incidentally their plays were filmed for TV. In 1978, Jean-Paul Carrère directed his own script for a TV version of Harold et Maud/Harold and Maude, and a TV-film was also made of Oh! Les beaux jours/Happy Days (Alexandre Tarta, 1990) starring Renaud and Barrault in their acclaimed roles of Winnie and Willy. It was her last 'film' role.

Madeleine Renaud died in Paris in 1994, seven months after the decease of her husband. She was married three times, to director Charles Gribouval (Charles Grandval), secondly to actor Pierre Bertin (some sources say she was only 'romantically involved' with him), and thirdly to Jean-Louis Barrault. She had a son, Jean-Pierre Granval (1923-1998), by her first marriage, and she was the aunt of actress Marie-Christine Barrault. Madeleine Renaud received many honours, was a Commander of the Legion of Honour, a Grand Officer of the Order of Arts and Letters and was awarded the Medal of the City of Paris and the Grand Prix du Theatre.