Simone Vaudry (1906-1993) was a popular French actress of the silent era and the early sound era. She appeared both in many French and several German films and starred in several popular serials. 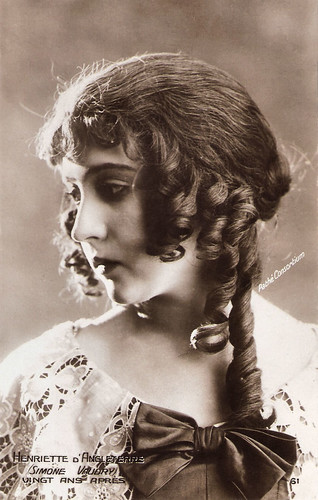 
Simone Vaudry was born Simone Hélène Georgette Vaurigaud in Paris. At the age of four she was already acting in silent films, debuting in the Gaumont production Le crime du grand-père/The crime of the grandfather (Léonce Perret, Jacques Roullet, 1910) written by Abel Gance, in which Suzy Prim co-acted.

In 1913, after various productions at Gaumont by Perret and others, Vaudry started to play in films by Éclair as well, directed by Victorin-Hippolyte Jasset. During the First World War, Vaudry did not act in film, but in 1918 she reappeared in Le Noël d’Yveline/The Christmas of Yveline (Georges-André Lacroix, 1918), Vaudry’s first feature, and again a Gaumont film with Prim.

In 1922 Vaudry also played Henriette d’Angleterre in the Alexandre Dumas adaptation Vingts ans après/Five Years After (1922) by Henri Diamant-Berger. This serial in ten chapters was the sequel to Diamant-Berger’s adaptation of Les trois mousquetaires/The Three Musketeers (1921).

In 1924 Vaudry had her first lead in a German film: Das lockende Gefahr/The luring danger (Josef Stein, 1924) and also had small part in the 12 episodes serial Les mystères de Paris/The Mysteries of Paris (Charles Burguet, 1924), starring Huguette Duflos. Vaudry had a much bigger part as Nina in the 8 episodes long Mylord l’Arsouille (René Leprince, 1924), starring Aimé Simon-Girard, and immediately after she had the female lead as Perrette in Fanfan-la-Tulipe (René Leprince, 1925), with again Simon-Girard in the male lead. All these films by Leprince were made for the Société des Cinéromans. 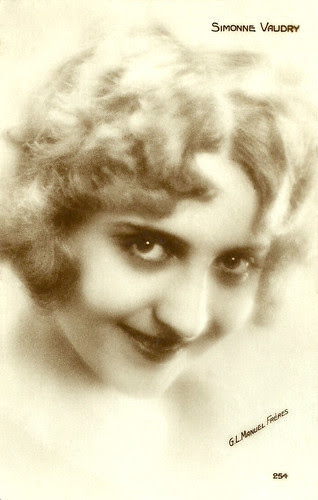 
After a minor part in Les petits/The Little Ones (Marcel Dumont, Gaston Roudès, 1925), Simone Vaudry had the female lead again in La rose effeuillée/The Rose Without Leaves (Georges Pallu, 1925), on the life of Saint Thérèse of Lisieux, who was beatified in 1923 and canonized in 1925. A complete, tinted copy of this previously considered lost film was traced back at the Roman film archive in the mid-1990s, but the film is yet to be represented. In 1936 Pallu would shoot a sound version of the film. 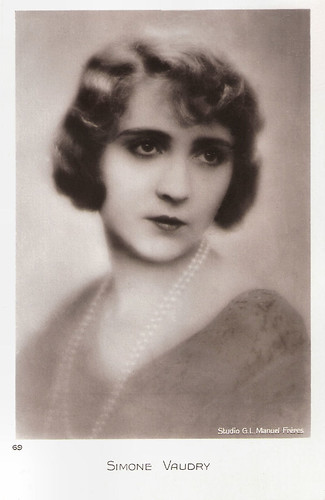 
When sound arrived in France, Simone Vaudry immediately had female leads in La maison des hommes-vivants/The House of the Living Men (Marcel Dumont, Gaston Roudès, 1929), starring Rudolf Klein-Rogge, and Le mystère de la villa rose/The Mystery of the Pink Villa (René Hervil, Louis Mercanton, 1930), starring Léon Mathot. In the latter film she was a phony fortune teller, who witnesses the killing of a rich woman by a band of murderous thieves and is herself suspected of the murder.

After a major part in the comedy Quand te tues-tu?/When Do You Kill Yourself? (Roger Capellani, 1931), shot at the Paris Paramount studios, Vaudry had the female lead in the period piece L’aiglon/The Eagle (Viktor Tourjansky, 1931), starring Jean Weber and based on the famous play by Edmond Rostand.

On internet there is no information about what Simone Vaudry did after this film. We only know that she died in Puteaux, France in 1993. She was 86. 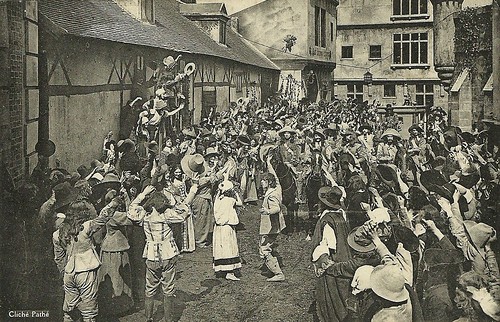