The creative life of prominent Soviet actor Yevgeni Urbansky (1932-1965) was short but very bright. In 1958 he rushed into the Russian cinema bursting with an irrepressible temperament and a craving for life. With his tragic death at the age of 33, a whole cinema epoch with peculiar aesthetics disappeared with him. 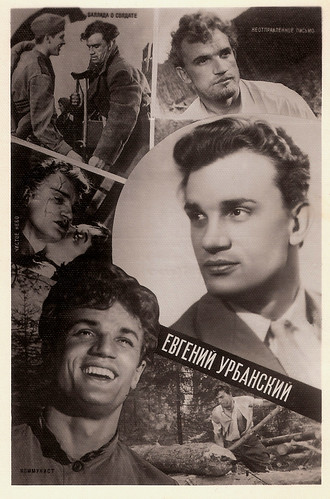 Russian postcard by Izdanije Byuro Propogandy Sovietskogo Kinoiskusstva, no. 00034, 1962. This postcard was printed in an edition of 125.000 cards. The price was 8 kop. 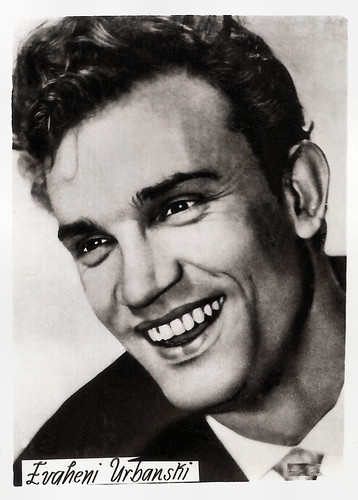 Yevgeni Yakovlevich Urbansky (Russian: Евгений Яковлевич Урбанский) or Evgeniy Urbanskiy was born in 1932 in Moscow, into the family of a Communist party worker. In 1957 he finished the Drama School Studio attached to MXAT and was admitted to the company of the Stanislavsky Moscow Drama Theatre.

His starring debut in the film Kommunist/The Communist (Yuli Raizman, 1958) brought him the adoration of the public, film critics and authorities as well. At AllMovie, Hal Erickson writes: "Yevgeny Urbansky plays Vassili, a dedicated communist who assumes control of a strategically important warehouse during the 1917 revolution. Almost single-handedly, Vassili fends off the counterattacks of the loyalist White Russians, here depicted as double-dyed villains. He finds time to romance the beautiful Aniuta (Sofya Pavlova) before he meets a spectacular death at the hands of 20 of his enemies. Even those unsympathetic to the film's politics will be swept up by the excitement and grandeur of Rasskaz Moei Materi (Stories of My Mother - the alternative title of Kommunist)."

The film won awards at the festivals in Venice and Kiev in 1958. In 1959 Kommunist was named among the three best films of the year according to the readers of the magazine Sovetsky Ekran (Soviet Screen). Urbansky next took his time to enrich his acting experience on stage, playing in around 22 to 25 plays every month.

Only in the middle of 1958 he finally turned to the cinema again. In the war drama Ballada o soldate/Ballad of a Soldier (Grigori Chukhrai, 1959), he played a nameless disabled soldier whom the main character Alesha Skvortsov comes across at a railway station.

At Senses of Cinema, Julia Levin writes: "A guy he meets at a train station, Vasya, lost his leg in the war and is contemplating not returning to his wife. An invalid, he is fearful of her disdain. Yevgeni Urbansky, a wonderful actor whose cinematic fame was as sudden as it was short-lived, plays the role. (...) Persuaded by Alexei, Vasya returns to his hometown. The suspense becomes almost unbearable while the two of them wait for Vasya’s wife (Elza Lezhdey) at a train station. It looks like she will never come – yet she does, and the two reunite nervously in a sweet embrace, walking down the platform without being able to hold each other’s hands. Moments like this fill the screen with an indelible power – a simple and poetic legacy that has given Ballad of a Soldier its historic longevity." 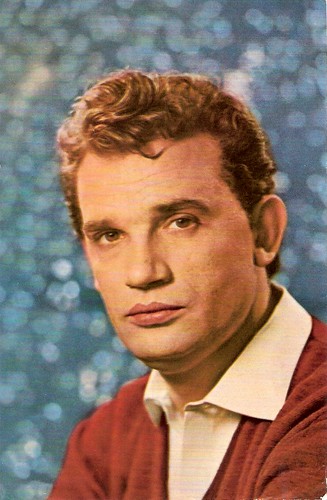 Russian postcard by Izdanije Byuro Propogandy Sovietskogo Kinoiskusstva, no. A 11456, 1965. Photo: Ter-Ovanesova. This postcard was printed in an edition of 100.000 cards. The price was 8 kop.

In 1960 Yevgeni Urbansky again worked with film director Grigori Chukhrai, who was admired by the actor. He played the main character, the pilot Alexei Astakhov, a hero of the Soviet Union in the drama Chistoe nebo/Clear Skies (1961).

This film turned to be one of the most complicated ones in the career of Urbansky. He again acted masterfully as a soviet pilot who was shut down by anti-air Nazi fire, caught alive and put in prison until the war finished. Once back home, hurt but alive, he was suspected of betrayal and collaboration with Nazis with the only evidence of his survival. Because of the suspects he was expelled out from the communist party to which he used to be a member.

Chistoe nebo/Clear Skies was an accusation of Stalin's injustice with many of the Soviet citizens who heroically fought against the Nazi army. The film won acclaim, was acknowledged as the best film of the year by Russian viewers, and gathered awards at film festivals in Moscow, Mexico and San Francisco.

At AllMovie, Mark Deming explains: "This film was produced during a brief time in the Khrushchev administration when criticism of the abuse of power under Stalin's leadership was accepted; within two years, Brezhnev had risen to power and this sort of commentary would once again be forbidden." 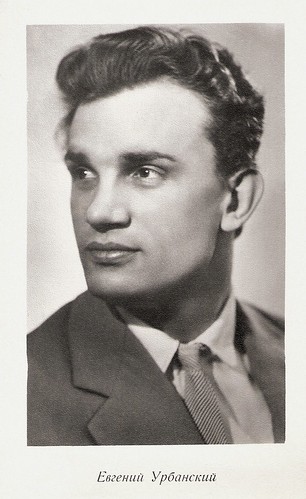 Russian postcard by Izdanije Byuro Propogandy Sovietskogo Kinoiskusstva, no. 124, 1961. This postcard was printed in an edition of 100.000 cards. The price was 8 kop.

Yevgeni Urbansky tragically died in November 1965 during the filming of Direktor/The Director. It happened during the shooting of a scene in which a transport column was driving over sands.

According to the scenario the car of Urbansky’s character was supposed to whirl through the sand dunes, overtake the column and head it. One of the most difficult shots in the scene was a bounce of the car from one of the dunes. The first take went fine, yet the second film director wanted the car to jump higher and asked for one more take.

During the next take the car suddenly turned upside down. The actor died immediately, only 33 years old.

In 1969 Direktor was re-filmed with Nikolai Gubenko playing the main role. The film was a success in the cinemas. In 1968 the documentary Yevgeni Urbansky, directed by Yekaterina Stashevskaya-Naroditskaya, was released. For Russian cinemagoers Yevgeni Urbanksky will forever remain 33.