Austrian stage and film actor Paul Hörbiger (1894-1981) belongs together with Hans Moser to the ‘primary rock’ of the Austrian cinema. His popularity was unique and was reflected in over 250 films, mostly lightweight comedies of the popular Wiener Film genre. 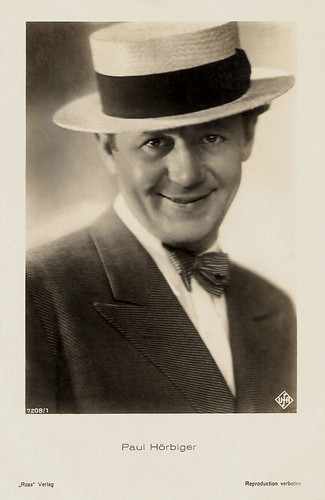 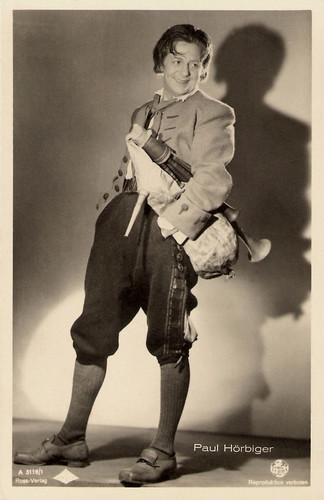 Breakthrough
Paul Hörbiger was born in Budapest, Austria-Hungary (now Hungary) in 1894. he was the son of Hans Hörbiger, an engineer who wrote Welteislehre on glacial cosmology. In 1902 his family returned to Vienna, while Paul attended the gymnasium (grammar school) at St. Paul's Abbey in the Lavanttal. In the First World War, he served in a mountain artillery regiment of the Austro-Hungarian Army, discharged in 1918 with the rank of an Oberleutnant. After the war he attended shortly the Otto theater school and made his stage debut in 1919 at the city theatre of Liberec (Reichenberg). From 1920 he performed at the Neuen Deutschen Theater (New German Theatre) in Prague. In 1926, with a contract for Max Reinhardt's Deutsches Theater in Berlin, he made his breakthrough. In the silent era, he impersonated witty and vicious characters in such films as the classic Spione/Spies (1928, Fritz Lang) with Willy Fritsch and Lien Deyers, Schmutziges Geld/Show Life (1928, Richard Eichberg) starring Anna May Wong, and another classic, Asphalt (1929, Joe May) with Gustav Fröhlich.

High Treason
From 1940 on, Paul Hörbiger was a member of the Viennese Burgtheater. During the war he acted in films like Operette/Operetta (1940, Willi Forst a.o.) and Wen die Götter lieben/Whom the Gods Love (1942, Karl Hartl) starring Hans Holt as Wolfgang Amadeus Mozart. These were often lightweight comedies of the Wiener Film genre, which was popular among German and Austrian audiences during the 1930's and 1940's. Hörbiger often played roles similar to those of Hans Moser: waiters, servants, cab drivers, porters as well as ballad-singers and singers during wine festivities. He also frequently plays such Austrian greats as Franz Joseph the II., Haydn or Radetzky. The two actors complemented one another brilliantly in such films as Wiener Geschichten/Viennese Stories (1940, Géza von Bolváry), Schwarz auf weiß/Black on White (1943, E.W. Emo) and Schrammeln/Strum (1944, Géza von Bolváry). Though in 1938 he had openly acclaimed the Austrian Anschluss to Nazi Germany and smoothly continued his career in propaganda films like Wunschkonzert/Request Concert (1940, Eduard von Borsody) or Die grosse Liebe/The Great Love (1942, Rolf Hansen) starring Zarah Leander, he was arrested in Vienna in the late days of World War II. The Nazis asccused him of high treason. The BBC already reported his death, but Hörbiger survived the war.

Stereotypical Roles
After the war, Paul Hörbiger remained one of the most popular German-speaking film actors. He played a small role as the intimidated doorman in the classic The Third Man (1949, Carol Reed). More demanding roles followed in Das Tor zum Paradies/The Strange Story of Brandner Kaspar (1949, Josef von Báky), Epilog: Das Geheimnis der Orplid/Epilogue (1950, Helmut Käutner) and Hallo Dienstmann/Hello Dienstmann (1951, Franz Antel). Yet, soon the old stereotypical roles returned in Viennese swindel films. He also starred in numerous Heimatfilme, again performing as the warm-hearted Viennese type and Heurigen singer, often together with Hans Moser and director Franz Antel. To his best-known films of these years belong Mädchenjahre einer Königin/The Story of Vickie (1954, Ernst Marischka) featuring Romy Schneider, Banditen der Autobahn/Bandits of the Highway (1955, Géza von Cziffra), and Sebastian Kneip (1958, Wolfgang Liebeneiner) with Carl Wery. In his later years he focused on stage acting at the Burgtheater. He also has stage appearances in Zürich, Moscow and New York as well as in West Germany and Israel. In 1969 he received the Filmband in Gold Award for his longtime contributions to the German cinema. He was married to actress Josepha Gettke, with whom he had four children. He was the father of actor Thomas Hörbiger, grandfather of actor Christian Tramitz and actress Mavie Hörbiger, brother of actor Attila Hörbiger and uncle of actress Christiane Hörbiger. Paul Hörbiger died in 1981 in Vienna, Austria. He was 86.