Welsh singer Tom Jones (1940) is particularly noted for his powerful voice. Since the mid 1960s, this ‘vocal powerhouse’ has sold over 100 million records. Many of his songs can be heard on film soundtracks, and he also regularly appeared as a singer and an actor in films and TV-series. In his time Tom Jones has tried his hand at styles including pop, rock, R&B, country, big band, dance, techno, gospel and jazz, and he's still going strong today. Despite his many well publicised infidelities, womaniser Jones was married to the same woman since 1957.  Last Sunday, his wife Linda has died from cancer. 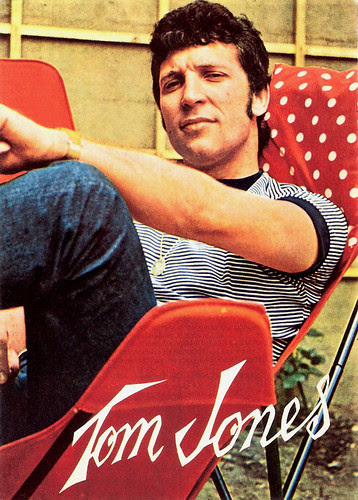 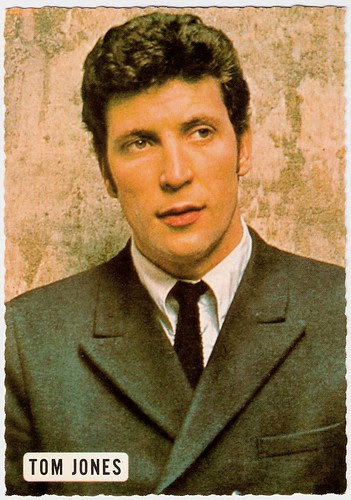 Too Raucous and Raunchy


Tom Jones was born Thomas John Woodward in Pontypridd, South Wales, in 1940. His parents were Freda Jones and Thomas Woodward, a coal miner.

Jones began singing at an early age: he'd regularly perform at family gatherings, weddings and his mother's Women's Guild meetings. At 16, he left school. He married his high school girlfriend, Linda Trenchard the following year, one month before their son Mark was born. To support his young family, Jones took a job working in a glove factory and was later employed in construction.

At night, he sang in pubs. Jones' bluesy singing style developed out of the sound of American soul music. His early influences included blues and R & B greats like Little Richard, Solomon Burke, and Jackie Wilson. Jones became the front man for Tommy Scott and the Senators, a Welsh beat group, in 1963. They soon gained a local following and reputation in South Wales.

Gordon Mills, a performer who had branched out into songwriting and management went to see him. He became his manager and contrived the stage name, Tom Jones, which not only linked the singer to the image of the title character in Tony Richardson's hit film Tom Jones (1963) starring Albert Finney, but also emphasised Jones' Welsh nationality. Many record companies found Jones' stage presence, act, and vocal delivery too raucous and raunchy. Eventually, Mills got Jones a recording contract with Decca.

His first single, Chills and Fever, was released in late 1964. It didn't chart, but the follow-up, It's Not Unusual became an international hit. The BBC initially refused to play it, but the offshore pirate radio station Radio Caroline promoted it. The heavily orchestrated pop arrangement perfectly meshed with Jones' swinging, sexy image, and in early 1965, It's Not Unusual reached number one in the United Kingdom and the top ten in the United States. 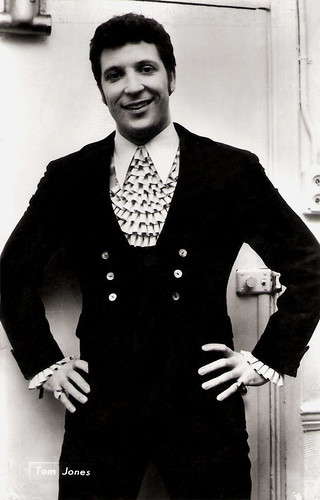 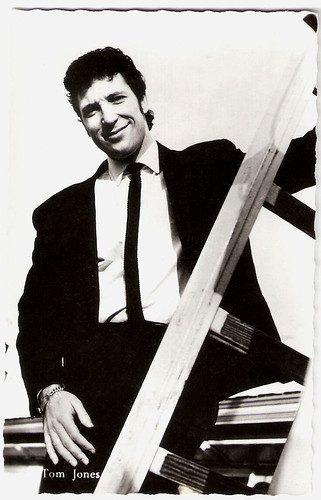 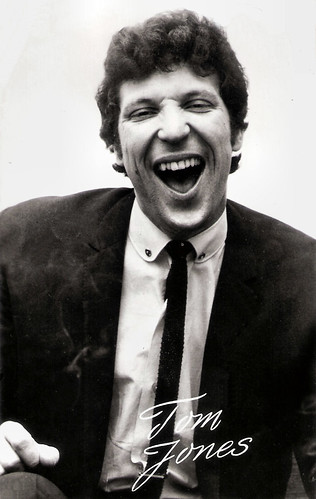 A More Respectable and Mature Crooner


During 1965, Gordon Mills secured a number of film themes for Tom Jones to record, including the themes for the comedy What's New Pussycat? (Clive Donner, Richard Talmadge, 1965), written by Burt Bacharach and Hal David, and for the James Bond film Thunderball (Terence Young, 1965) starring Sean Connery.

Jones was also awarded the Grammy Award for Best New Artist for 1965. In 1966, Jones' popularity began to slip somewhat, causing Mills to redesign the singer's image into a more respectable and mature crooner. Jones also began to sing material that appealed to a wider audience, such as the big country hit Green, Green Grass of Home. The strategy worked and Jones returned to the top of the charts in the UK and began hitting the Top 40 again in the USA.

For the remainder of the decade, he scored a consistent string of hits on both sides of the Atlantic. In 1967, Jones performed for the first time in Las Vegas at the Flamingo. His charismatic performances and style of dress (increasingly featuring his open half unbuttoned shirts and tight pants) became part of his stage act. Women would swoon and scream, and some would throw their knickers on stage.

Soon after he began to play Las Vegas, he chose to record less, instead concentrating on his lucrative club performances. However, one of Tom's best-loved singles was released in 1968. Delilah was a dark tale of murder and infidelity, but people were entranced by the melody and Jones' unforgettable delivery. It became a big hit. 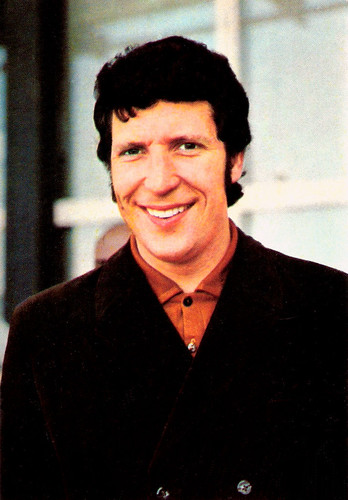 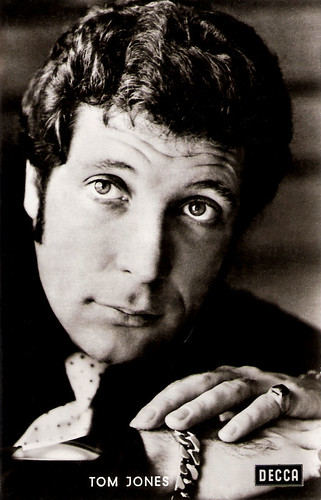 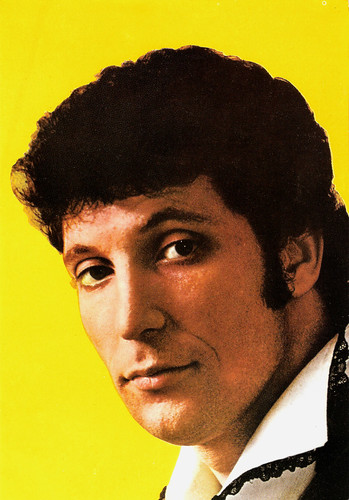 
In the early 1970s, Tom Jones had a number of hit singles, including She's A Lady, Till, and The Young New Mexican Puppeteer, but in the mid 1970s his popularity declined, although he did have a big hit in 1976 with Say You'll Stay Until Tomorrow, which went to #1 on the US country chart and #15 on the Billboard Hot 100.

He appeared in such TV films as Showdown at O.K. Corral (Nicholas Webster, 1972) and Pleasure Cove (Bruce Bilson, 1979). In 1974, Tom finally moved to America, buying the mansion formerly belonging to Dean Martin in Los Angeles' Bel Air. In the early 1980s, Jones started to record country music. From 1980 to 1986, Jones had nine songs hit the top 40 on the US country chart, yet he failed to crack the top 100 in the UK or chart on the Billboard Hot 100.

After Jones' long-time manager Gordon Mills died of cancer in 1986, Jones' son Mark became his new manager. Mark recognised that Jones was incorporating modern music in his live shows and suggested that he should start to record songs from a fresh genre and leave country music behind. In 1987, Jones re-entered the singles chart with A Boy From Nowhere, which went to #2 in The UK. The following year, he covered Prince's Kiss with The Art of Noise. The song was a hit on both sides of the Atlantic, reaching #5 in the UK and #31 in the US. The video for Kiss won the MTV Video Music Award for Breakthrough Video.

Jones received a star on the Hollywood Walk of Fame in 1989. He played a leading part in the British TV film The Ghosts of Oxford Street (Malcolm McLaren, 1991). In 1993, he appeared as himself on the sitcom The Fresh Prince of Bel-Air and in animated form for an episode of The Simpsons.

Jones signed with Interscope Records in 1993 and released the album The Lead And How To Swing It. He played a photographer in the romantic comedy Silk n' Sabotage (Joe Cauley, 1994), did a cameo in the comedy The Jerky Boys (James Melkonian, 1995), and was himself between the Martians in the hilarious Mars Attacks (Tim Burton, 1996).

In 1999, Jones released the album Reload, a collection of cover duets with artists such as The Cardigans, Van Morrison, Portishead, The Stereophonics, and Robbie Williams. The album went to #1 in the UK and sold over 4 million copies worldwide. The next year he lent his voice to Walt Disney’s animation film The Emperor's New Groove (Mark Dindal, 2000).

In 2002, Jones released the album Mr. Jones, which was produced by Wyclef Jean. The album and the first single, Tom Jones International, were top 40 hits in the UK. Jones received the Brit Award for Outstanding Contribution to Music in 2003. The following year, he teamed up with pianist Jools Holland and released Tom Jones & Jools Holland, a roots rock 'n' roll album. It peaked at #5 in the UK.

In 2005, the BBC reported that Jones was Wales' wealthiest entertainer, having amassed a fortune of £175 million. Jones, who was awarded an OBE in 1999, was knighted by Queen Elizabeth II in 2006 at Buckingham Palace for his services to music. In 2010, his latest album Praise & Blame debuted at number 2 on the UK album chart.

In October 2015 Tom Jones' autobiography entitled Over the Top and Back: The Autobiography was published by Michael Joseph. A new musical, Tom Jones the Musical, based on the singer's life and recordings, opened at the Wales Millennium Centre in March 2016. Tom Jones has remained married to his wife Melinda Rose Woodward, known as Linda since 1957, despite his many well publicised infidelities. Linda passed away on 9 April 2016. The couple lived in Los Angeles and London. Their two grandchildren are Alexander born (1983) and Emma (1987).