Charming Danish actress Karina Bell (1898-1979) was the most popular female star of the Nordisk Film Kompagni in the 1920s. The blond and slim actress was the beauty ideal of her generation. She also appeared in silent German and Swedish films. In later life she became the CEO of a Danish brewery. 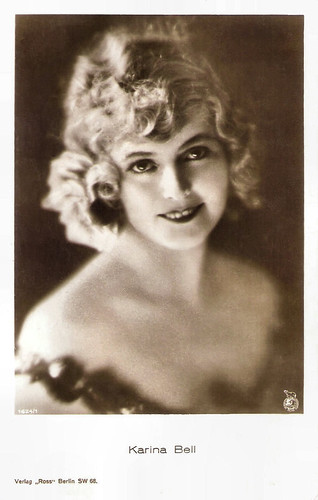 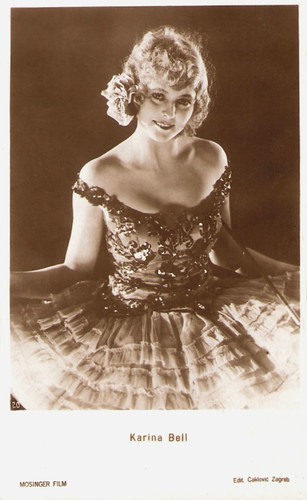 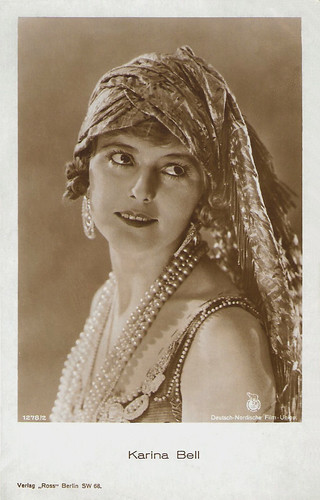 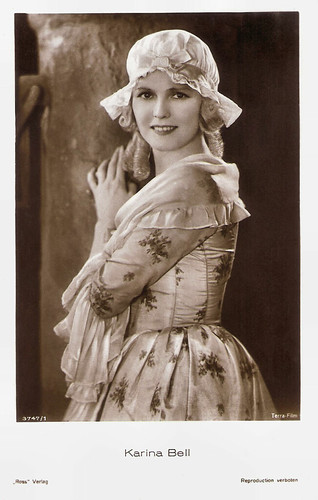 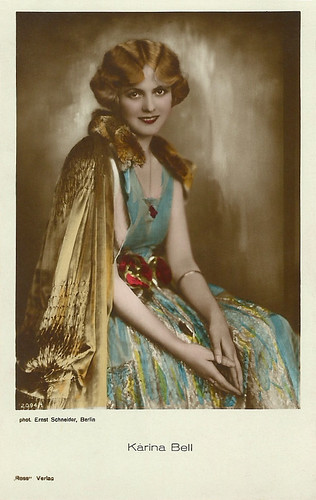 
Karina Bell was born Karina Parkov in Hellerup, Denmark, in 1898. She was the daughter of Hans Peter Hansen and Anette Marie Nielsen. She followed lessons at the ballet school of Emilie Walbom and at age 21, she made her stage debut with the leading role in Tornerose (Sleeping Beauty) (1919) at Det nye Teater (The New Theater).

Bell also played in Benjamin Christensen’s presumed lost film Helgeninderne/Helge Indians (1921) and in his famous fictionalized documentary Häxan/Häxan: Witchcraft Through the Ages (1922), showing the evolution of witchcraft, from its pagan roots to its confusion with hysteria in modern Europe.

Her breakthrough was the Charles Dickens adaptation David Copperfield (A.W. Sandberg, 1922). Anders Wilhelm Sandberg was between 1916 and 1926 the leading director at the Nordisk studio. Karina Bell would star in a string of 15 films by Sandberg.

Their last film for Nordisk was a remake of Sandberg's first success Klovnen/The Clown (1926), in which Karina Bell costarred with Gösta Ekman. Due to their lack of financial support to the production of Klovnen, Sandberg broke with Nordisk and he finished the film with his own funds. The film would become Karina Bell's international breakthrough. 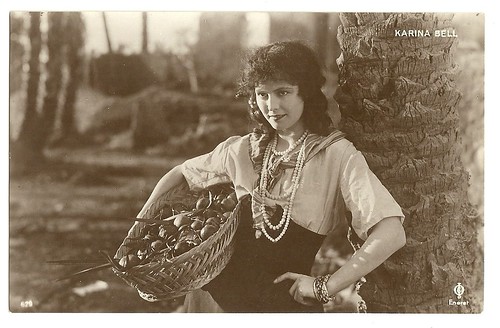 Danish postcard by Eneret, no. 629. Photo: publicity still for Kan Kvinder fejle/Can women fail? (A.W. Sandberg, 1924). This romantic comedy was partly shot in Liguria, Italy. Director A.W. Sandberg told the newspapers the film crew started filming in Trieste and at Lake Garda, but as in two days two and a half meters of snow fell, forcing the crew to withdraw to Verona and Venice. As winter still chased the crew, they moved on to Bordighera on the Italian Riviera. Here they got finally the weather they wanted, and the images were recorded under a scorching sun in 30-35 degree heat, according to Sandberg. After their return from Italym the crew shot interior shots in Valby, where among other things a set was built that envisioned 'a wealthy home'. To make the interior as compelling as possible, Sandberg almost emptied his apartment at Nørregade to provide props, such as chairs with embroidery made by his wife Elsa Fröhlich, paintings of snowy landscapes made by his father-in-law Thaulow, and an old dresser with bronze female statues by sculptor Jean René Gauguin, son of painter Paul Gauguin. 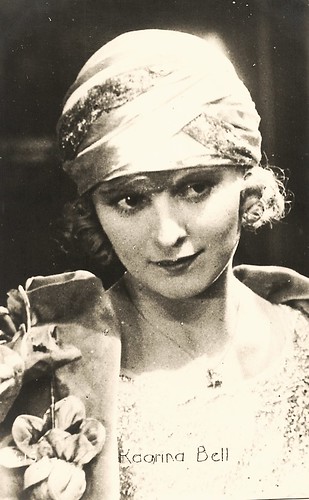 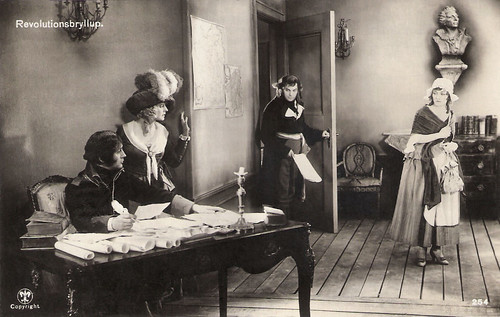 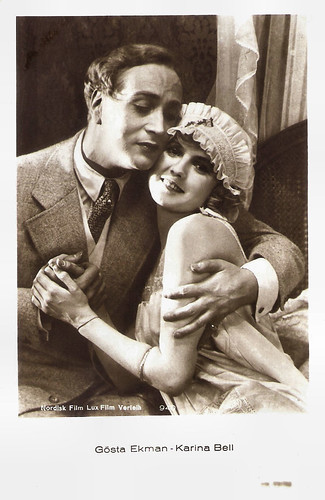 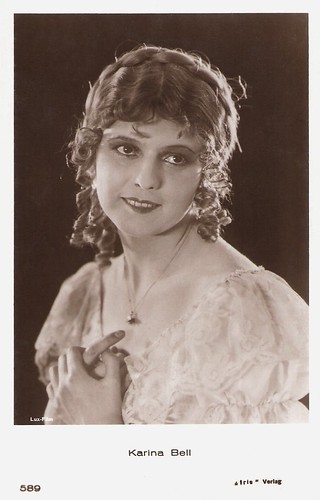 
In 1926, Karina Bell followed A.W. Sandberg when he left for Berlin. In Germany she starred in Eheskandal in Hause Fromont jun. und Risler sen./Wedding Scandal in the House of Fromont Jr. and Risler Sr. (A.W. Sandberg, 1927) with Lucy Doraine, Nora Gregor and Fred Louis Lerch.

She also starred in Phantome des Glücks/Phantoms of Happiness (Reinhold Schünzel, 1929). She played a dancer opposite Michael Chekhov and Gaston Modot. The film was originally made as a silent, then re-released in 1930 with an added soundtrack.

After the arrival of the sound film, she returned to Denmark. She performed in theatres in Copenhagen and Oslo, and she made two sound films: Nyhavn 17/New Harbour 17 (George Schneevoigt, 1933) and one last film with A.W. Sandberg, the comedy 5 raske piger/Five Healthy Girls (1933).

In 1934 she married Knud P. Parkov, director of the Wiibroes Bryggeri (Wiibroes beer brewery), and gave up her stage and film career. When her husband died in 1949 she took over as CEO at Wiibroes under the name Karen Gudrun Louise Parkov. 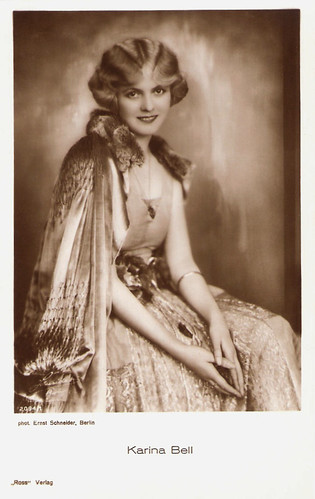 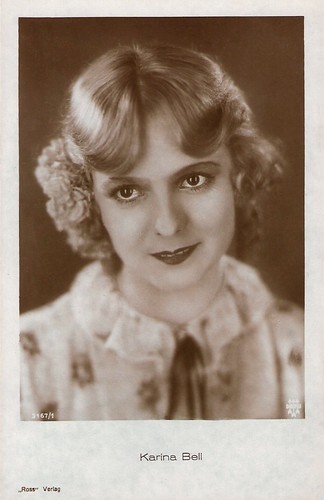 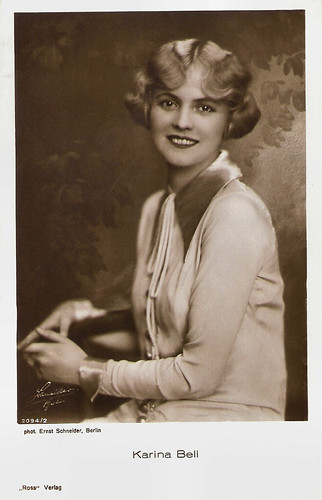 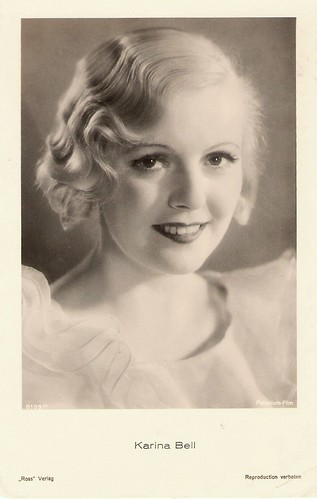 Your posts have so much great info! So glad you are keeping these Starlets alive!!!

How perfectly lovely she is! I enjoyed this post so much. Your collection of postcards and the history surrounding them is just extraordinary.

I am so glad you had such a lovely time with your sister. I have two sisters--and a bevy of adopted little sisters, who delight my heart.