Italian actor Livio Pavanelli (1881-1958) was a star of the Italian and in particular the German silent cinema. He also worked in Italian sound cinema as actor and production manager. And he directed four Italian films, in the silent and the sound era. 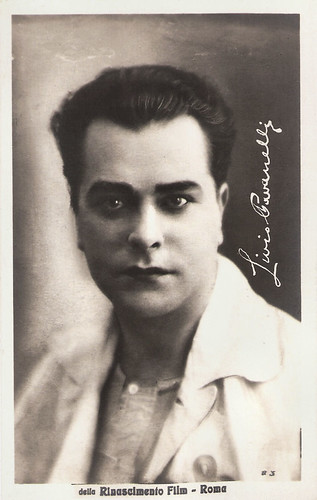 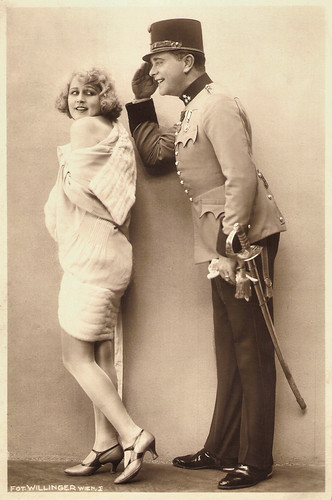 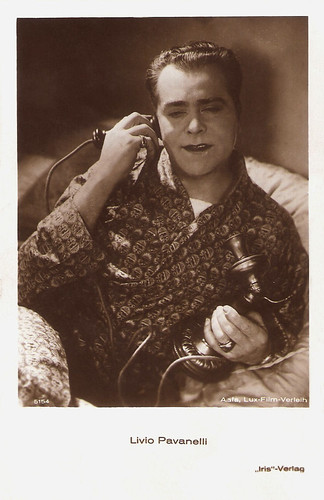 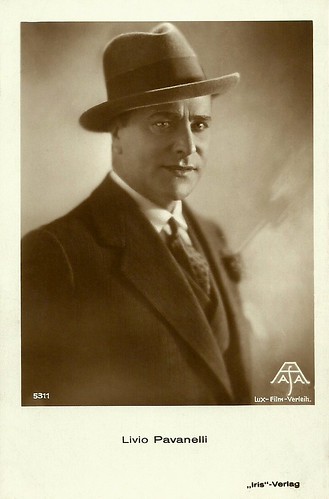 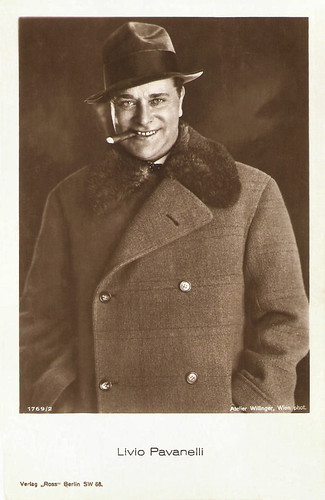 
Livio Cesare Pavanelli was born in Copparo, Italy in 1881. He was member of a big family of farmers and merchants from the Ferrara area. His father Andrea was also a notable patriot in the Italian Risorgimento. As a consequence of financial disasters in the family he moved with his parents to Bologna where he visited the technical school. During his adolescence he wandered around Italy, eager for excitement. When in Venice in 1898, he fell in love with the stage while assisting a show of wandering artists. He performed with various companies like that of Antonio Gandusio, and in 1902 the Venetian company of Emilio Zago. He then shifted to the company of Gustavo Salvini and Ermete Zacconi, before reaching Eleonora Duse’s company with whom he stayed for 9 years, accompanying her at her foreign tours as well.

In the early 1910s he performed leads in various films, starting in a series of short silent films with Pina Fabbri including Il delitto della via di Nizza (Henri Etievant, 1913) and Il romanzo di due vite/The novel of two lives (Attilio Fabbri, 1913). From 1914 on he starred in a series of films with Hesperia like L’ereditiera/The heiress (Baldassarre Negroni, 1914) and L’agguato/The trap (Guglielmo Zorzi, 1915); with Mercedes Brignone like Il re dell’Atlantico/The king of the Atlantic (Baldassarre Negroni, 1914) and Mezzanotte/Midnight (Augusto Genina, 1915); and with Gianna Terribili-Gonzales.

In 1916-1917 Pavanelli didn’t appear in a film, but in 1918 he was back in business. He starred opposite Francesca Bertini in various parts of the series I sette peccati capitali/The seven capital sins (Camillo De Riso a.o., 1918), La piovra/The Octopus (Edoardo Bencivenga, 1919) and Anima allegra/Happy soul (Roberto Roberti, 1919). He also appeared opposite another diva, Lyda Borelli, in Carnevalesca/Carnival (Amleto Palermi, 1918) and Una notte a Calcutta/A Night in Calcutta (Mario Caserini, 1918). In 1918 he also played Saint Sebastian in Enrico Guazzoni’s epic Fabiola (1918), with Elena Sangro in the title role, and he had a part in the propagandist fake biopic of Francesca Bertini: Mariute (Edoardo Bencivenga, 1918), starring the diva herself.

In those years, Thea Pavanelli aka Thea played with Pavanelli in La reginetta Isotta/The queen Isotta (1918), based on a story by Honoré de Balzac. Reportedly she was his wife, but no additional information is available about this. In the following years, Pavanelli became a superstar of the Italian silent cinema. He was the star of epic films like Il sacco di Roma/The Sack of Rome (Enrico Guazzoni, Giulio Aristide Sartorio, 1920), but he also appeared in a long list of diva films with Pina Menichelli such as La storia di una donna/A Woman's Story (Eugenio Perego, 1920), La verità nuda/Woman Against Woman (Telemaco Ruggeri, 1921), L’età critica/The critical age (Amleto Palermi, 1921), La seconda moglie/The second wife (Amleto Palermi, 1922), and La biondina/The Blonde (Amleto Palermi, 1923). 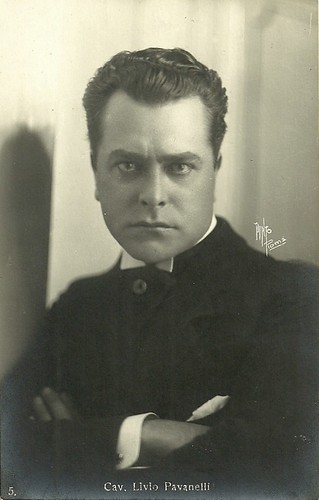 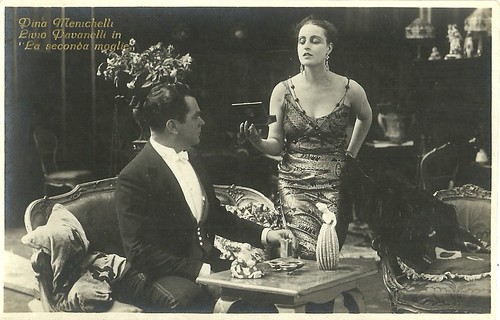 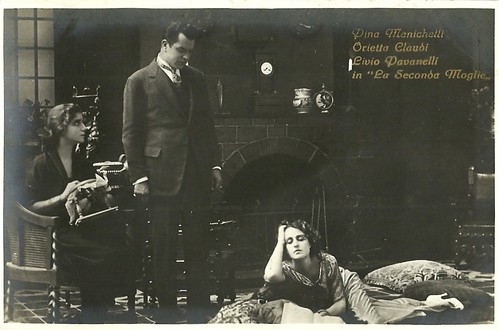 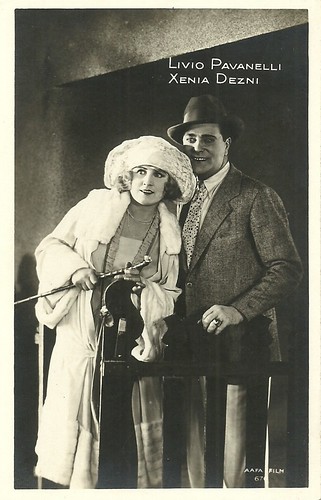 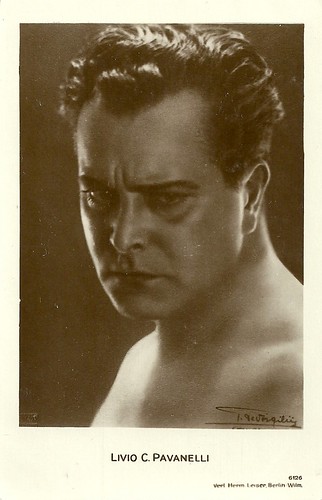 
In 1924, there was a serious crisis in the Italian cinema. Livio Pavanelli moved to Austria first and then to Germany, where he could continue his successful career. He performed opposite many female stars of the Weimar cinema, such as Lee Parry in Die schönste Frau der Welt/The Most Beautiful Woman of the World (Richard Eichberg, 1924), Fern Andra in Die Liebe is der Frauen Macht/Love is the Women's Power (Erich Engel, Georg Bluen, 1924), Liane Haid in Ich liebe dich!/I Love You (Paul L. Stein, 1924), Im weissen Rössl/The White Horse Inn (Richard Oswald, 1926), and Als ich wieder kam (1926); and Ossi Oswalda in Niniche (1924).

1926 was Pavanelli’s most prolific year. The next year, films with Mary Nolan, Mady Christians and Xenia Desni followed, but also parts in the Henny Porten drama Die grosse Pause/The big break (Carl Froehlich, 1927). He returned temporarily to Italy to play Florette in the adaptation of the popular boulevard comedy Florette e Patapon/Florette and Patapon (Amleto Palermi, 1927), with French actor Marcel Lévesque as Patapon.

Pavanelli played the lead in Liebfraumilch (Carl Froehlich, 1929) and Sir Henry Baskerville in Der Hund von Baskerville/The Hound of the Baskervilles (Richard Oswald, 1929). Even in 1930 Pavanelli continued to play in German films, such as Freiheit in Fesseln/Freedom in chains (Carl Heinz Wolff, 1930), starring Fritz Kampers and Vivian Gibson, and Ehestreik/Marriage strike (Carl Boese, 1930), with Georg Alexander and Maria Paudler. 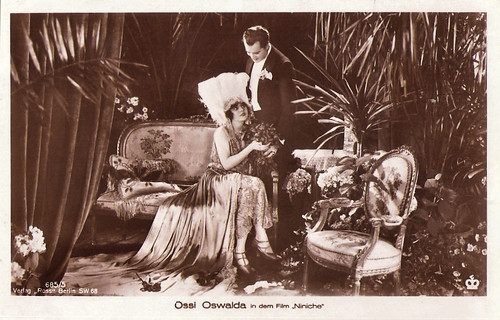 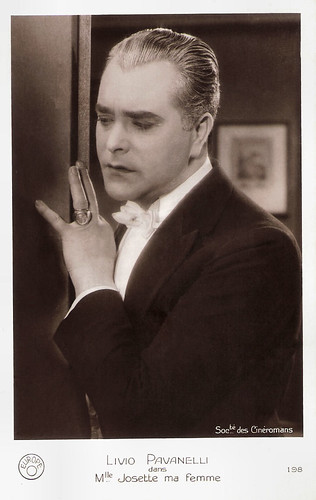 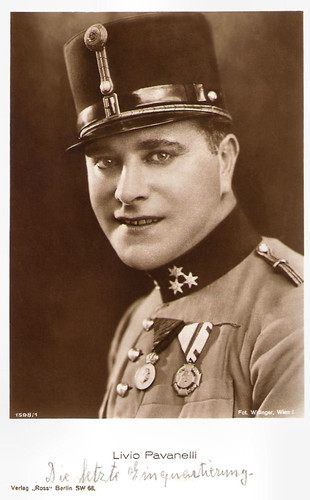 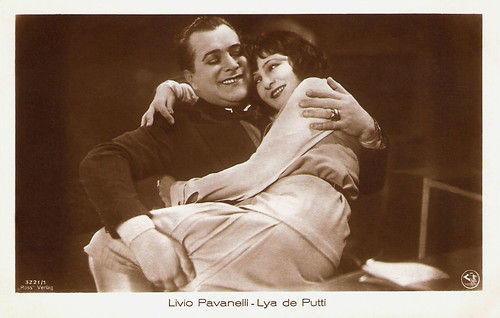 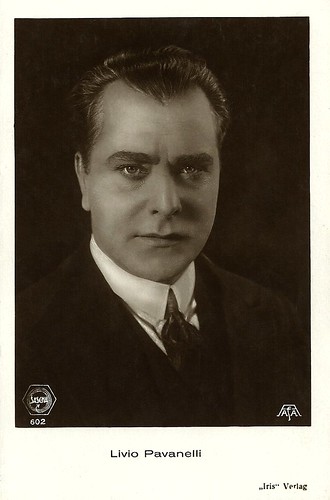 
When sound cinema was there to stay, Livio Pavanelli returned to Italy. He first played opposite former silent star Maria Jacobini in the film Perché no?/Why Not? (Amleto Palermi, 1930), an Italian language version of The Lady Lies (Hobart Henley, 1929), shot in the Paramount studios in Paris. Pavanelli next had a part in the German sound film Liebeskommando/Love's Command (Geza von Bolvary, 1931) with Dolly Haas.

Then he returned to Italy, where he acted in films like Pergolesi (Guido Brignone, 1932) with Elio Steiner in the title role, and L’ultimo dei Bergerac/The last of the Bergeracs (Gennaro Righelli, 1933). However, his star had declined. Pavanelli had one last film performance in Germany in the film Frühlingsmärchen/Spring Fairy Tale (Carl Froehlich, 1934), in which he appropriately played a singing master from Milan.

According to Wikipedia Pavanelli played both in the Italian and the German version of Max Neufeld’s La canzone del sole/Das Lied der Sonne/The Song of the Sun (1934), starring Vittorio De Sica. He also performed in Gustav Machaty’s Italian production Ballerine/Ballerinas (1936).

In the 1930s Pavanelli also became producer, scriptwriter and director. Wikipedia claims that one of his productions was opera singer Tito Schipa’s success film Vivere/To Live (Guido Brignone, 1937), while IMDb lists Pavanelli not as producer but as production manager or unit manager for 10 different films between 1939 and 1954. He often worked thus for director Guido Brignone such as La mia canzone al vento (Guido Brignone, 1939) and Romanzo di un giovane povero/The novel of a poor young man (Guido Brignone, 1942), but also for the postwar epic Messalina/The Affairs of Messalina (Carmine Gallone, 1951). In 1939 Pavanelli was also scriptwriter for La mia canzone al vento/My Song to the Wind.

In 1941 he directed his sole sound feature Solitudine/Loneliness, starring Carola Höhn. In the silent era, Pavanelli had already directed three films: Silvio Pellico (1915), La complice muta/The Mute Accomplice (1920), and Madonnina (1921). Livio Pavanelli’s last film as an actor was L’altra/The Other (Carlo Ludovico Bragaglia, 1947), in which he played a French impresario. After that he continued to work only as production or unit manager. His last job was production management of the epic Cortigiana di Babilonia/The Queen of Babylon (Carlo Ludovico Bragaglia, 1954), starring Rhonda Fleming. Livio Pavanelli died at the hospital San Giovanni in Rome in 1958. He was 76. 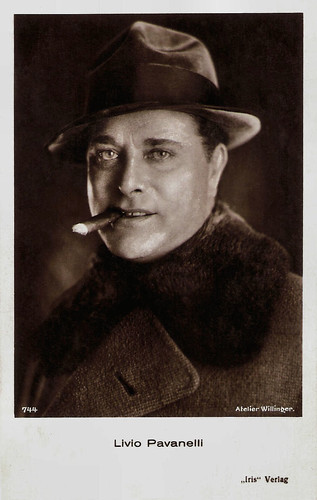 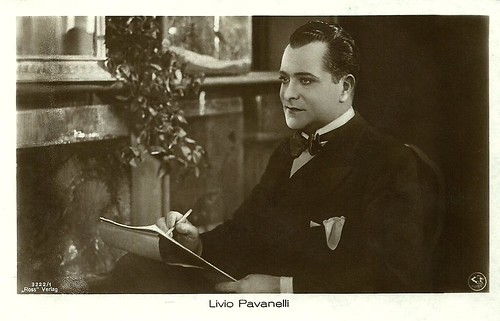 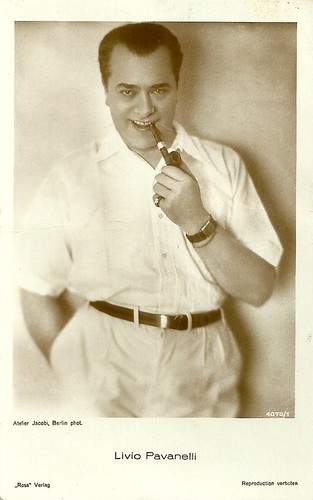 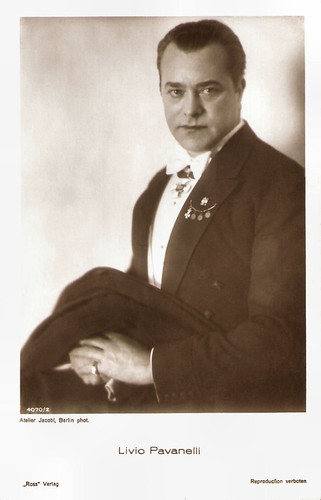 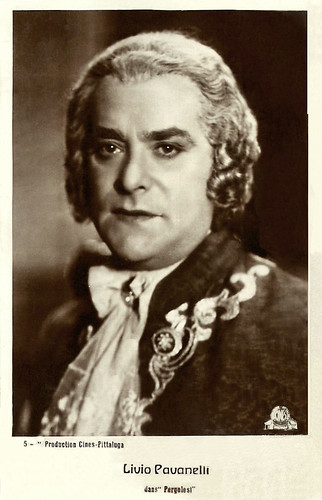 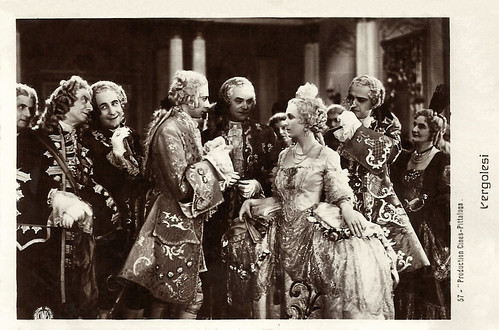 Italian postcard by G.B. Falci, Milano, no. 57. Photo: Cines-Pittaluga. Livio Pavanelli, Carlo Lombardi and Dria Paola in Pergolesi (Guido Brignone, 1932). Bystanders gossip while Nicola d'Arcangeli (Livio Pavanelli) introduces his sister Maria (Dria Paola) to the man he has selected for her, the aristocrat Raniero di Tor Delfina (Carlo Lombardi). She is in love with Pergolesi (Elio Steiner), though, whom the brother considers too low in class.