EFSP's Dazzling Dozen: A Night at the Opera

Nowadays, you can enjoy a night at The Metropolitan Opera in New York in your local cinema. In December 2006, The Met started a series of performance transmissions shown live in high definition in cinemas around the world. The series expanded from an initial six transmissions to 10 in the 2014–2015 season and today reaches more than 2,000 venues in 70 countries across six continents. But long before these transmissions started, several opera stars were already very popular in the cinema. Today 12 dazzling postcards of opera performers who also became film stars. 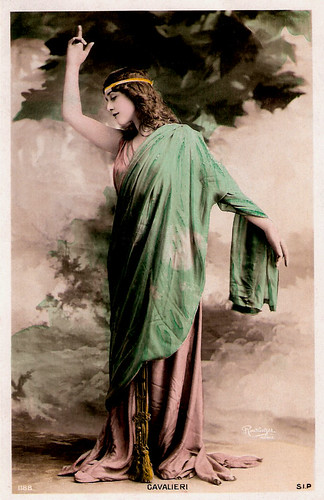 Around 1900, Italian soprano Lina Cavalieri (1874-1944) was considered the most beautiful woman on earth. In the 1910s, she pursued a career in the silent cinema in Italy and in the United States. 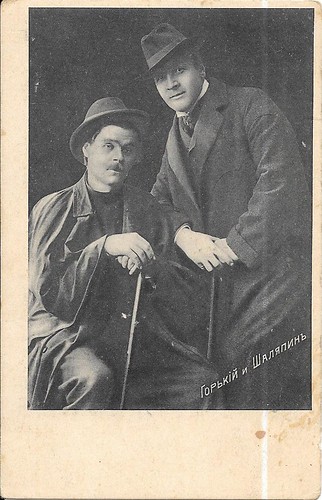 Feodor Ivanovich Chaliapin (Russian: Фёдор Ива́нович Шаля́пин) (1873–1938) was a Russian opera singer. The possessor of a large, deep and expressive bass voice, he enjoyed an important international career at major opera houses and is often credited with establishing the tradition of naturalistic acting in his chosen art form. The only sound film which shows his acting style is Don Quixote (Georg Wilhelm Pabst, 1933). Chaliapin collaborated with novelist Maxim Gorky, who wrote and edited his memoirs, which he published in 1933. 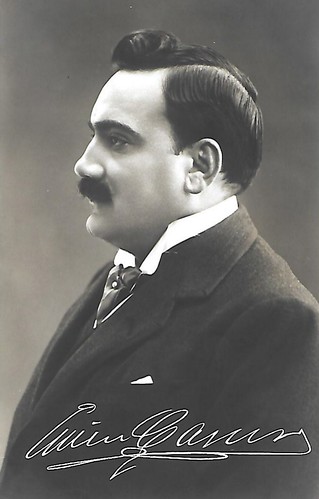 Enrico Caruso (1873-1921) was an Italian operatic tenor. He sang to great acclaim at the major opera houses of Europe and the Americas, appearing in a wide variety of roles from the Italian and French repertoires that ranged from the lyric to the dramatic. Between 1908 and 1919 he appeared in five films. 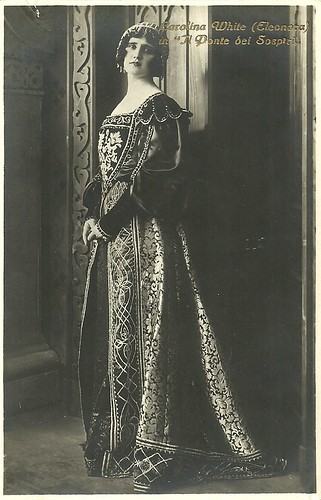 American opera singer Carolina White (1885-1961) had a short-lived film career. She played opposite the famous opera singer Enrico Caruso in My Cousin (Edward José, 1918). In 1921 she played the love interest of Luciano Albertini in the 4-part episode film Il ponte dei sospiri, directed by Domenico Gaido, and partly shot on location in Venice. After that White didn't act in film anymore. She died in Rome in 1961. 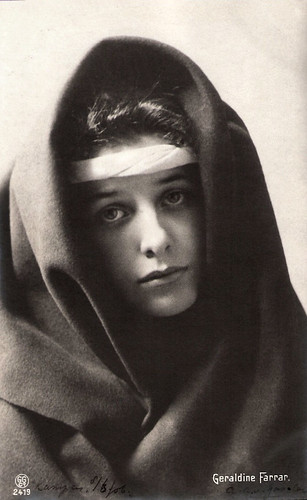 American silent film star Geraldine Farrar (1882-1967) was one of the most famous opera singers of the early twentieth century and one of the great beauties of her day. She had a large following among young women, who were nicknamed 'Gerry-flappers'. From 1915 to 1920, she also starred in more than a dozen films, which were filmed during the then traditional 8 week summer hiatus from the opera house and concert hall. Her films included Cecil B. De Mille's adaptation of Georges Bizet's opera Carmen (1915). One of her most notable screen roles was as Joan of Arc in Joan the Woman (Cecil B. DeMille, 1917).

Austrian opera singer Richard Tauber (1891-1948) was one of the world's finest Mozartian tenors of the 20th century. Some critics commented that "his heart felt every word he sang". He also tested the then new talking pictures in such popular musical films as Ich küsse Ihre Hand, Madame (1929) with Marlene Dietrich, Das Land des Lächelns (1930) and Melodie der Liebe (1932). 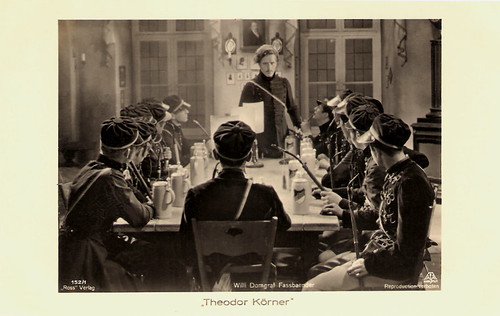 Celebrated German opera singer Willi Domgraf Fassbaender (1897–1978) was one of the leading lyric baritones of the inter-war period. He was particularly associated with Mozart and Italian roles. ‘The Italian baritone’ starred in the 1930’s in a number of musical films, which helped his shining international reputation. 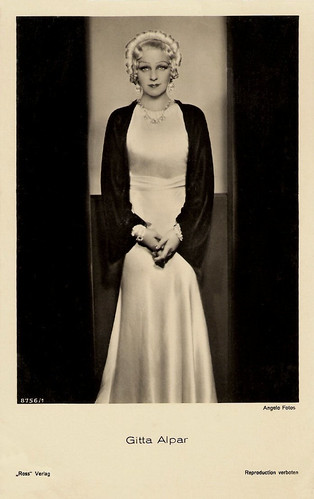 Hungarian-born Gitta Alpár (1903-1991) was a Jewish actress, opera and operetta singer, and dancer, whose career in Germany was broken by the Nazis. 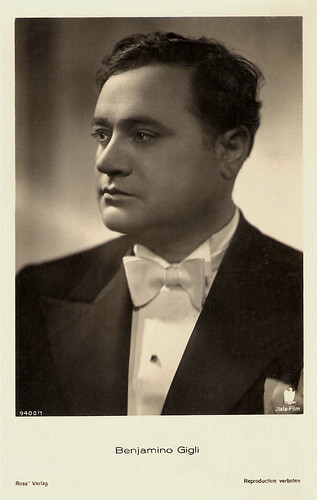 Actor and opera singer Beniamino Gigli (1890-1957) was one of the most famous Italian tenors, internationally respected for the beauty of his voice and his vocal technique. Between 1935 and 1950, 'Benito Mussolini's favourite singer' also starred in various German and Italian entertainment films. 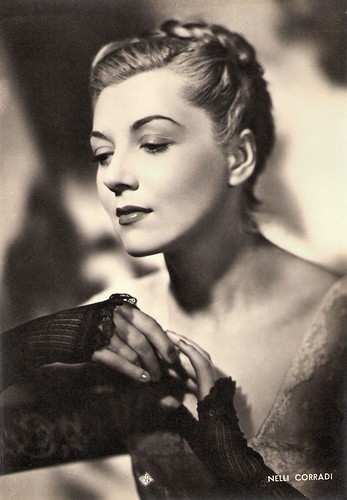 Beautiful Nelly Corradi (1914–1968) was an Italian opera singer and actress. She made her film debut in Max Ophüls’s La signora di tutti (1934) and had her biggest successes after the war with opera films like Lucia di Lammermoor (1946).

Mario Lanza (1921–1959) was an American tenor, actor and Hollywood film star of the late 1940s and the 1950s. His masterpiece was The Great Caruso (Richard Thorpe, 1951), the top-grossing film in the world in 1951. Lanza's voice was so dazzling that an awestruck Arturo Toscanini called it the "voice of the century". 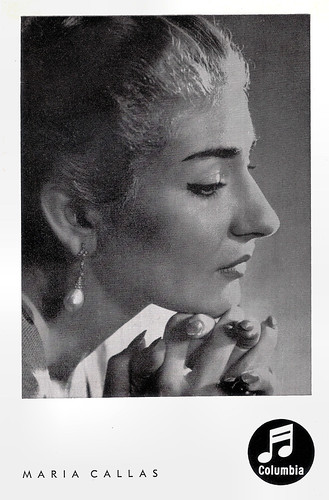 Greek-American soprano Maria Callas (1923–1977) was one of the most renowned and influential opera singers of the 20th century. Many critics praised her bel canto technique, wide-ranging voice and dramatic interpretations. Her repertoire ranged from classical opera seria to the bel canto operas of Donizetti, Bellini and Rossini and further, to the works of Verdi and Puccini; and, in her early career, to the music dramas of Wagner. Her musical and dramatic talents led to her being hailed as La Divina. Her most famous film appearance was the title role in Pier Paolo Pasolini's Medea (1969).

Paul, once again I am amazed at all your wonderful research and that you have preserved the history of these brilliant men and women of old.

I hope you have a GREAT weekend. Summer is drawing to a close here. The crickets are singing their nighttime song and the nights are stretching a bit longer. The harvest is to come and the field are ripe and golden. The pear tree is loaded with wonderful sweet fruit.

Ah, I do wish summer would stay just a little bit longer. :D Blessings to you and those you love, my Friend.