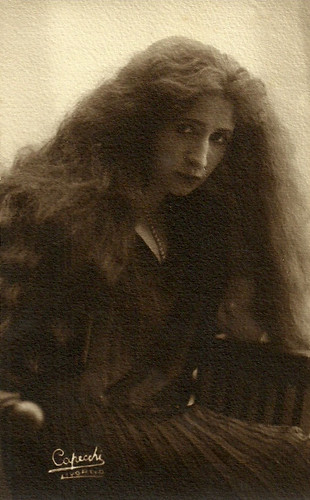 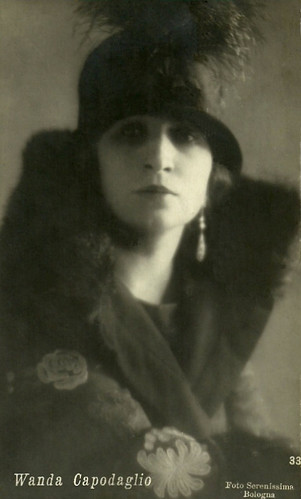 
Wanda Capodaglio was born in 1889 in Asti, Italy. She was the daughter of Tullio Capodaglio and Ida Pecorini. She came from an artist family and had five brothers, among them the well-known Ruggero Capodaglio, the later husband of Anna Gramatica.

Already as a child Wanda acted on stage - for the first time in 1898 in the Teatro Valle in Rome, as Totò in the first Italian staging of Zazà by Berton & Simon.

In 1905, she signed a contract for the role of ’amorosa’ and supporting actress at the Compagnia Picello, directed by Enrico Paladini. Three seasons later, the small actress with her unusual physiognomy and great dramatic talent became the first lady of the Paladini-Gina Favre company, where she stole the show of the main actors in Buffoni by M. Zamaçois.

Capodaglio then moved on to the ensemble of Irma Gramatica. There she acted for a year in e.g. La trilogia di Dorina by Rovetta and La moglie ideale by Marco Praga. Subsequently, she had engagements with the the companies Rodolfi-Nipoti-Spani (1910), with Luigi Zoncada-Isa Severi (1911), and with Antonio Gandusio-Lyda Borelli-Ugo Piperno (1912-1915), where she acted in two new plays.

In 1914, at the Teatro Valle in Rome, she played La Rondine in Il ferro by Gabriele D'Annunzio , and Nené in Il giglio nero by Fausto Maria Martini. She also acted in reprisals of Demi-monde by Alexandre Dumas fils and Marcia nuziale by Henri Bataille. 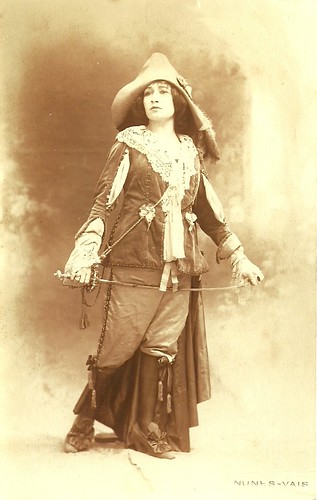 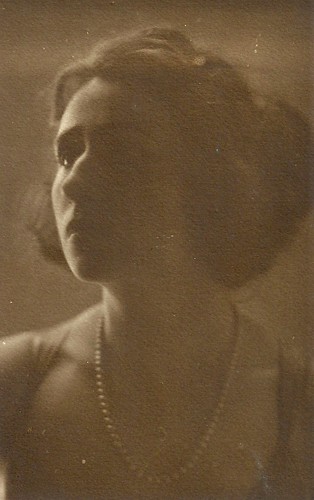 
In 1914 Wanda Capodaglio had her first role on screen in La donna nuda/The Naked Truth (Carmine Gallone, 1914). It was probably her only silent film part, in an adaptation of the play La femme nue by Henri Bataille. The Roman Cines company let all the actors act in the same sets and costumes as on stage.

In La donna nuda, Capodaglio plays the wealthy and flirtatious Princess of Chabran, the rival of Lolotte, played by Italian diva Lyda Borelli. The princess steals Lolotte’s husband, the painter Pierre Bernier (Lamberto Picasso). Lolotte goes into a hysterical fit and begs the princess on her knees to leave her husband alone, but the princess sees the man as only a nice toy.

It is rather Wanda’s brother Ruggero Capodaglio who acted in various films in the later 1910s. He also played a minor part in La donna nuda. 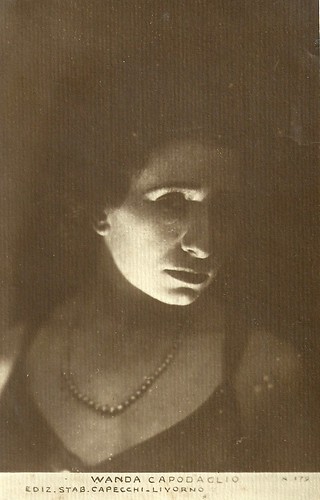 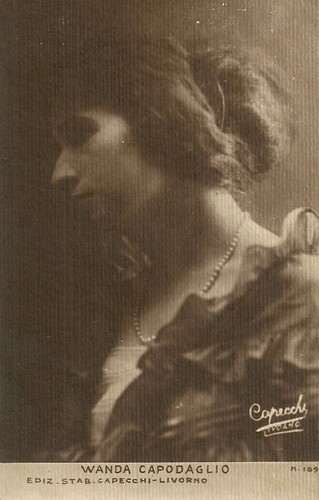 Peak in her stage career


In the years 1915-1918 Wanda Capodaglio was one the star actresses of Ruggero Ruggeri’s stage company. After an intermezzo at again Irma Gramatica’s company, the peak in her stage career followed.

Capodaglio became in 1919-1924 the undisputed first lady in the company of Uberto Palmarini, which successfully staged plays by Anton Chekhov and Lenormand. Palmarini’s ‘temps morts’ in Chekhov’s Uncle Vanya (staged in 1922) hurt the Italian audience that was used to vivacious French theatre, but Wanda didn’t care about the whispers and comments.

Capodaglio also played Matilda Spina opposite Alda Borelli in Luigi Pirandello’s Enrico IV (1922). In 1924 Capodaglio joined the Virgilio Talli-Romano Calò-Enrico Olivieri company where she played in another Chekhov play, The Seagull (1924), which was a fiasco though, despite her acting.

In the following year she founded with Marcello Gordia her own theatre group, which staged plays by Luigi Pirandello, Nikolai N. Ewreinov and Ferenc Molnár. In 1928-1931 she acted at her own Capodaglio-Palmarini company. Here her interpretation in Topaze by Marcel Pagnol gave her much acclaim.

In the early 1930s, during a break, she met the Italo-German actor Alexander Moissi. Her husband Pio Campa (they were married in 1919) convinced her to do a national tour in 1933-1935 with Moissi, who had never performed in Italy (Wikipedia erroneously mentions a tour abroad). Moissi was gravely ill and thrilled by the tour and the possibility to improve his health. The tour was successful but also demanding. Moissi died in 1935 of a pneumonia.

After a break, Capodaglio celebrated a triumphant return to the stage in 1937 with the Compagnia Nazionale alongside Annibale Betrone, Luigi Carini and her husband Pio Campa. From 1939 onwards, she taught at the Accademia nazionale d'arte drammatica for many years and thus came into contact with many later stars of the Italian film and the stage, such as Vittorio Gassman, Monica Vitti, Gian Maria Volonté, and in particular Rossella Falk. In the late 1940s Capodaglio would act in modern plays by e.g. Eugene O’Neill, Gabriel Garcia Lorca and Graham Greene. 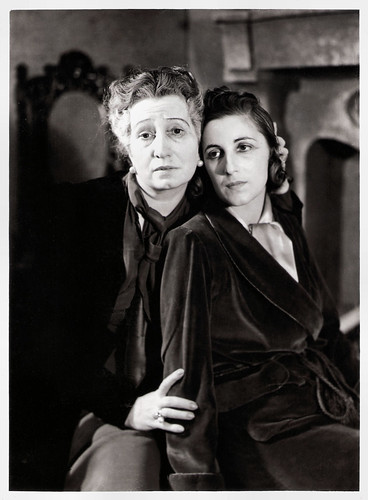 Return to the screen

After the war she still played minor parts in film, of which her most important one was the older woman, La Signora, who shelters Marcello’s Mastroianni’s anti-fascist Ugo in Carlo Lizzani’s Cronache di poveri amanti (1954), based on Vasco Pratellini’s classic novel. It is in the old lady’s house that Ugo meets Gesuina (Anna Maria Ferrero), falls in love and marries her.

Occasionally Capodaglio would still perform on stage as in Giorgio Strehler’s staging of Coriolanus (1957). In 1963 Capodaglio received the Premio R. Simoni for her whole stage career at the Teatro Romano in Verona.

From the early 1930s, Capodaglio acted in radio prose plays, first for EIAR and after the war at RAI, both in classic stage plays as in purposefully written radio plays. From the mid-1950s onwards, she also acted in plays on television until her retirement at the end of the 1960s. Memorable was her role as Aunt Betsy opposite a very young Giancarlo Giannini in David Copperfield (1966).

Between 1968 and 1970 she did her last roles on stage, screen and television. On film it was as the title character of the Grandmother in Mario Monicelli's Toh, è morta la nonna/Oh, Grandmother's Dead (1970). The film was a financial disaster, but Monicelli himself liked its fixed framing like in silent cinema.

Wanda Capodaglio died in 1980 in Castelfranco di Sopra, near Arezzo, where she had a villa for a long time.