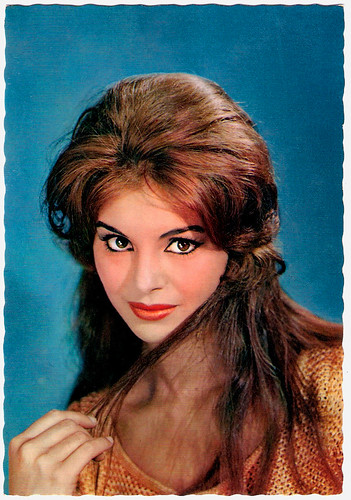 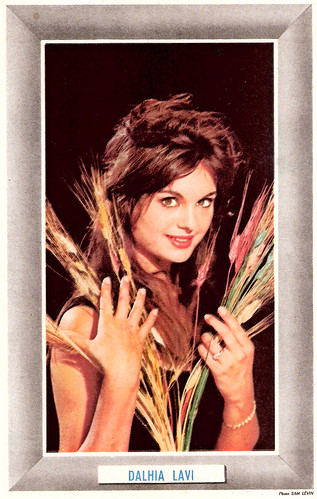 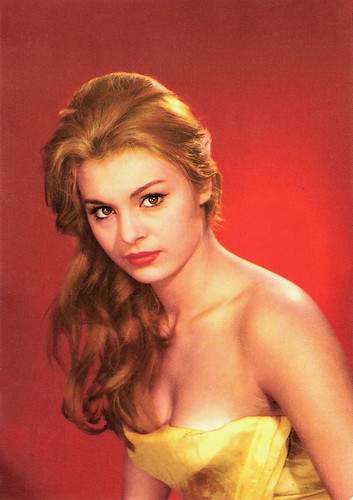 
Daliah Lavi was born Daliah Lewinbukh (Levenbuch) in Shavei Zion, near the harbor city of Haifa in British Mandate of Palestine (now Israel) in 1942. She was the daughter of a German mother and a Russian father.

Kirk Douglas reportedly ‘discovered’ Daliah. He was making a film in Israel in 1952, when he met the Lewinbukhs. It was Daliah's tenth birthday and the family celebrated a party, where Douglas and the film crew were invited. As a birthday present, Douglas gave little Daliah a ballet dress, and two years later he arranged a scholarship for her to study ballet at the Royal Opera house in Stockholm.

In Sweden she also made her film debut in the August Strindberg adaptation Hemsöborna/The People of Hemso (Arne Mattsson, 1955). That year Lavi abruptly halted her beginning career and returned to Israel. According to some sources she had to give up ballet on account of her low blood pressure. Other sources write that she returned to Israel because of the death of her father.

The information on IMDb, AllMovie and German Wikipedia that she served in the Israeli Army is according to Henrik Hemlin at Mario Bava Tripod: “a false but persistent rumor”. In Israel the ravishing, raven-haired beauty began to work as a model.

In 1960, her film career really took off, when she played the lead role in the German-Israeli adventure film Brennender Sand/Blazing Sand (Raphael Nussbaum, 1960). That year she also costarred with Jean-Pierre Cassel in Candide ou l'optimisme au XXe siècle/Candide (Norbert Carbonnaux, 1960), a French comedy based on the classic novel Candide by Voltaire, but set in the World War II era.

The following years she appeared in several European films. Fluent in many languages, she acted in German, French, Italian, Spanish and English-language films. In Two Weeks in Another Town (Vincente Minnelli, 1962) she played alongside her old friend Kirk Douglas. For her part she was nominated for a Golden Globe.

Also notable was the Gothic horror film La Frusta e il corpo/The Whip and the Body (Mario Bava, 1963) with Christopher Lee. Jay Fenton writes at IMDb: “It is certainly one of the most brilliantly bizarre horror films ever made. Directed by cult icon Mario Bava, Italy's finest cinematographer (if not one of their finest directors), it rises as far above an S & M fantasy as can be imagined. It was censored in every country in the world for its sexual violence (...) Even now it remains a profoundly misunderstood film and should be seen in a theater in its complete form instead of on video.” 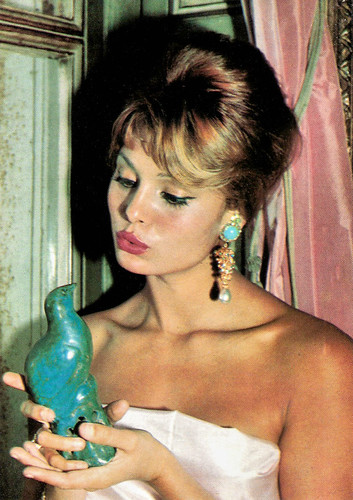 Spanish postcard by Postal Oscarcolor, no. 368. 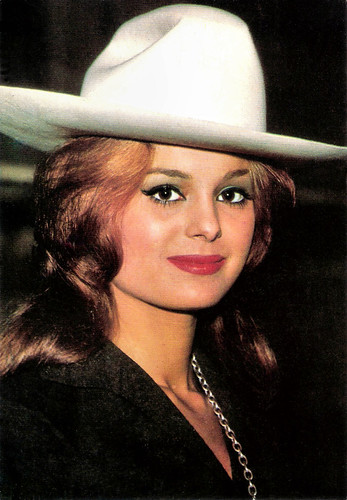 Spanish postcard by Postal Oscarcolor, no. 545. 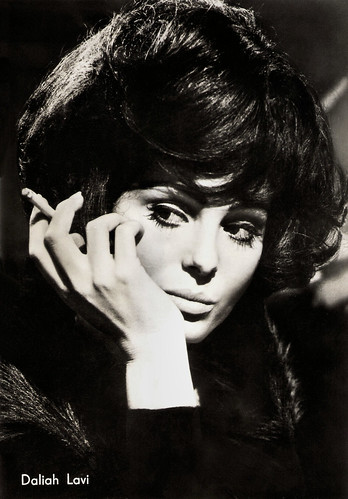 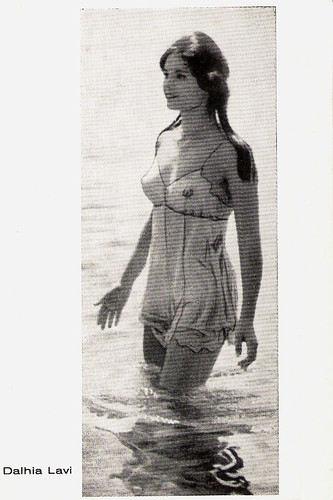 
Decked out in tight mini-skirts, thigh-high go-go boots and a helmet of black hair, Daliah Lavi fit in perfectly with the times. She became one of the swingers of the psychedelic 1960s. She reached a peak with her role of The Girl in Lord Jim (Richard Brooks, 1965). Hal Erickson writes at AllMovie: “Despite the impressive star lineup of (Peter) O'Toole, (Eli) Wallach, Jack Hawkins, Curt Jurgens and Paul Lukas, most press coverage went to leggy leading lady Daliah Lavi - including the 1964 Saturday Evening Post article about the making of Lord Jim, written by Richard Brooks himself.”

Hollywood noticed her, and she became one of its many sexy foreign imports at the time. Think also: Elke Sommer, Ewa Aulin, Senta Berger, Rosanna Schiaffino, Sylva Koscina, Barbara Bouchet, and of course Ursula Andress.

Lavi appeared in the first Matt Helm film The Silencers (Phil Karlson, 1966) opposite Dean Martin. Next she played a Russian princess in the spy spoof The Spy with a Cold Nose (Daniel Petrie, 1966) opposite Laurence Harvey. However, her most famous role is probably as 'The Detainer/007' in the James Bond parody Casino Royale (John Huston, a.o., 1967).

But when the 1960s ended, her film career also went in decline. Her last film was the very mediocre Catlow (Sam Wanamaker, 1971) with Yul Brynner.

In the meantime Lavi had started a new, equally successful career as a Schlager singer. In 1969, Israeli musical star Topol had invited her to sing some Hebrew songs in his BBC show. It resulted in a contract with Festival Records in the UK, but her record career took really off when she was contracted by the German Polydor label. Oh, wann kommst du? (Oh, when will you come?) in 1970 and Willst du mit mihr geh'n? (Do You Want To go with me?) became Top 10 hits in the German charts.

In 1971, she even was the most successful female singer in Germany, and she won an Otto, a major prize awarded by the German pop music magazine Bravo. Daliah kept turning out records until the early 1990s, even though her later releases fared less well in the charts.

She incidentally appeared on German television in dramatic roles, such as in the comedy Mrs. Harris und der Heiratsschwindler/Mrs Harris and The Marriage Swindlers (Franz Josef Gottlieb, 1991) featuring Inge Meysel, and in the series Duell zu dritt/Duel for Three (Peter Sämann, 1997).

In 2009 she made a surprise come-back in the German charts with the album C'est la vie - so ist das Leben (That’s Life) and the 66 year old diva went on a successful farewell tour along the German theatres. Daliah Lavi lived in the US with her fourth husband, businessman Charles Gans.

Daliah Lavi died of natural causes at her home in Asheville, US. She was 74, and had three sons, Rouben, Alexander and Stephen Gans, and a daughter, Kathy Rothman. 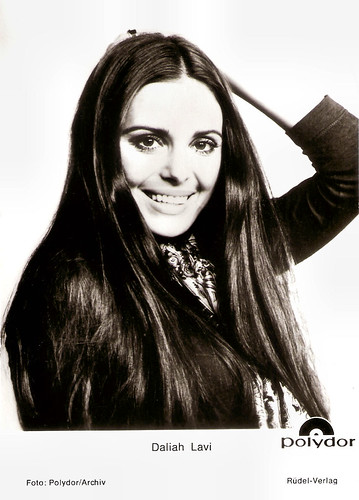 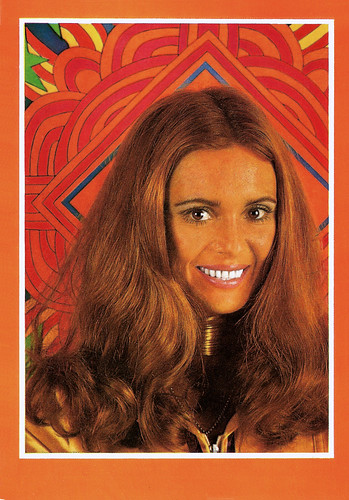 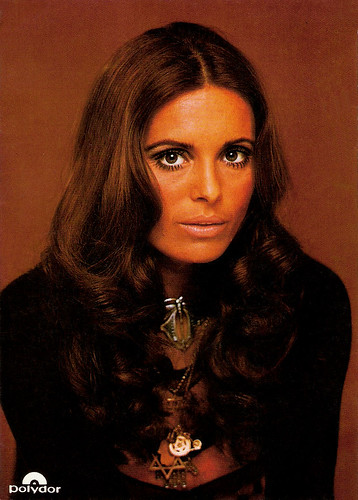 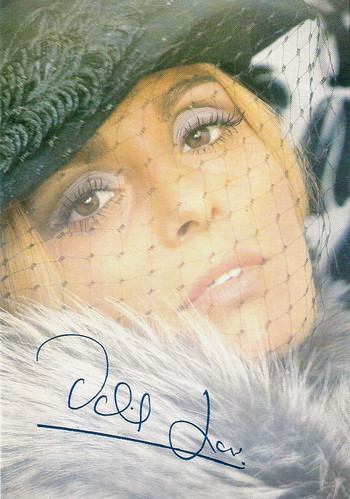 Anyone sporting thigh-high go go boots is ok in my book :)
Great images! Thanks Bob

I totally agree!!! Happy to see you're back!

I love DALIAH LAVI for ever