German actor Johannes Riemann (1888 - 1959) appeared from the First World War till the end of the Second World War in some 90 films, often as the gentleman who elegantly breaks a woman’s heart. From 1934 on he also wrote screenplays and directed films. In 1939 he was named Actor of the State in Nazi-Germany and in 1944 he even performed for the staff of concentration camp Auschwitz. 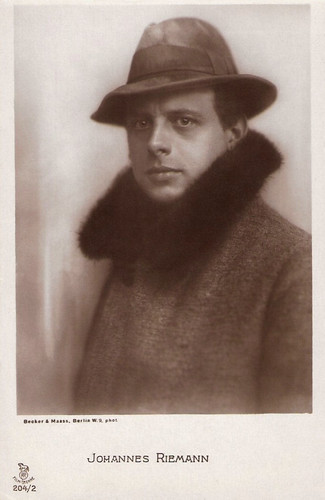 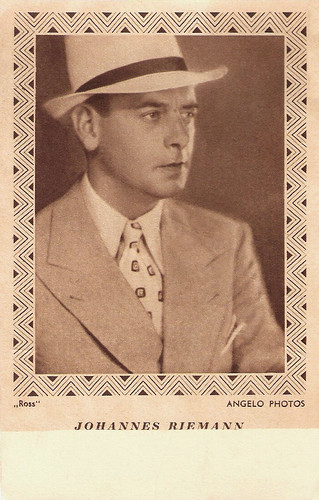 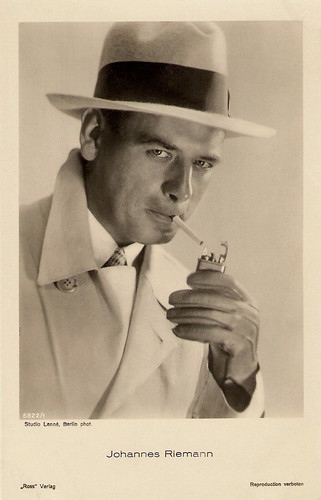 Henny Porten
Eugen Johannes Riemann was born in Berlin in 1888. He grew up under modest circumstances after his father's death when Johannes was only 7 months old. The boy aspired to a career as an oratory singer after he was accepted as a teenager at Berlin's Hof- und Domchor. With the choir Johannes performed several times for the Kaiser’s family, but after his vocal change, a teacher recommended that he should turn to acting. He took acting lessons with Anna von Strantz-Führing and with Alexander Strakosch. In 1908 the 20 year old Riemann made his debut at the Hebbel-Theater in Berlin. Next stations in his theatrical career were provincial theatres in Teplitz, Meran and Marienbad, the Volksbühne in Berlin in 1911 and the Hoftheater in Weimar in 1912. In 1916, Max Reinhardt brought him back to Berlin and made him a cast member of the Deutsches Theater. At the same time, he met film star Henny Porten who after a theater performance helped him to land his first role in a film at her side in Gelöste Ketten/Loosed Chains (1916, Rudolf Biebrach). He soon appeared again with the Superstar of the early silent cinema in Die Faust des Riesen/The Giant’s Fist (1917, Rudolf Biebrach). 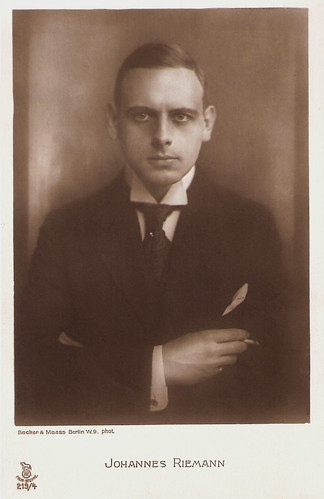 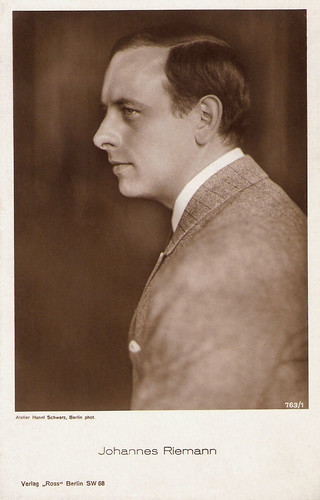 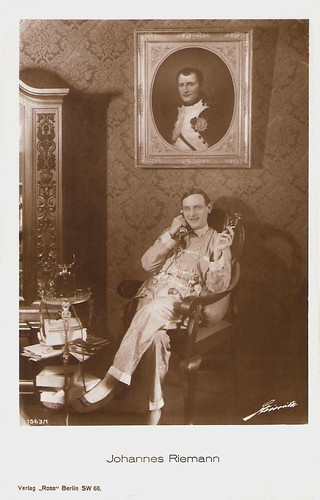 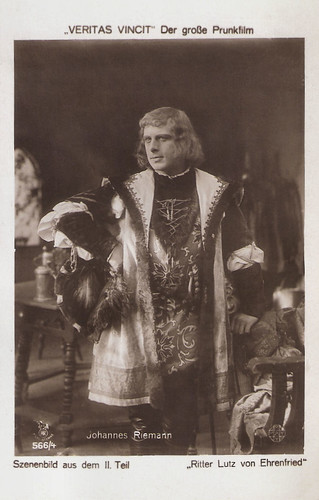 German postcard in the Film Sterne series by RotoPhot., no. 566/4. Photo: publicity still of Johannes Riemann as Ritter Lutz von Ehrenfried in the May Film production Veritas vincit (1918, released 1919, Joe May). Veritas Vincit was the first German so-called Monumental-Film (epic movie) and was a film in three episodes, set in Roman Antiquity, around 1500 and in recent times. Riemann and May's wife Mia May acted in all three episodes, while the general theme was the triumph of truth over lies.

Charming Gentleman
The emphasis of Johannes Riemann’s film career lies between 1916 and 1943. Among his early silent films were the three-parter Ahasver (1917, Robert Reinert), Schloß Einöd/The Einöd Castle (1919, Erik Lund) and Irrlicht/Ghost Light (1919, Erik Lund). He became known to a wider audience with his performance in the elaborate three-part history film Veritas Vincit (1919, Joe May). In the film, he co-starred alongside director Joe May's wife Mia May in three different roles in three episodes: one situated in the Roman times, one in the Middle Ages and one in the 20th Century. From then on, Riemann became a sought-after actor who till 1926 starred in four to ten films a year often as a charming gentleman. In the early 1920’s he repeatedly worked with director Friedrich Zelnik, for instance, for Anna Karenina (1920) as count Wronski. But he also starred in films by Dimitri Buchowetzki (Sappho, 1921), Lupu Pick (Das Panzergewolbe/Armored Vault, 1926) and Robert Wiene (Die Frau auf der Folter/Scandal in Paris,1928). Other popular films of the 1920’s were Wilhelm Tell (1923, Rudolf Dworsky, Rudolf Walther-Fein), the funny comedy of social classes, Lumpen und Seide/Rags and Silk (1925, Richard Oswald) and Fräulein Chauffeur/Miss Chauffeur (1928, Jaap Speyer) opposite Mady Christians. Curiously he also starred in Die Stadt ohne Juden/A City Without Jews (1924, H.K.Breslauer), a document about the novel Die Stadt ohne Juden from Hugo Bettauer. According to the reviewer on IMDb the film is “a great puzzle of statements of the early 20's in an community before the big economic crises and the Holocaust”. The premiere took place on 25 July 1924 in Vienna. National socialist party members threw stink bombs into the film theaters. In the city of Linz the film was banned. On 10 March 1925, National Socialist thug Otto Rothstock shot Hugo Bettauer, who died the next day. Rothstock was lionized as a hero. He spent 18 months in prison, but when he was released, he found himself wealthy and resumed his career as a Nazi. 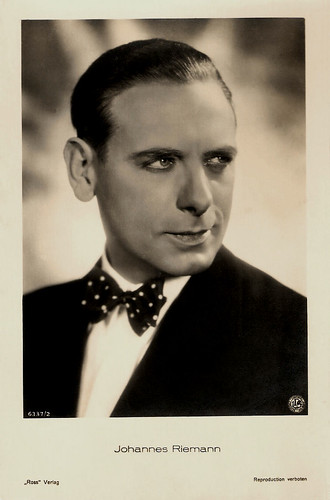 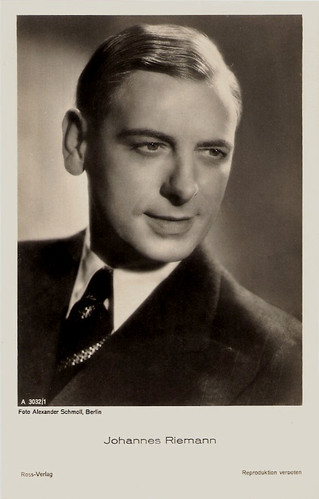 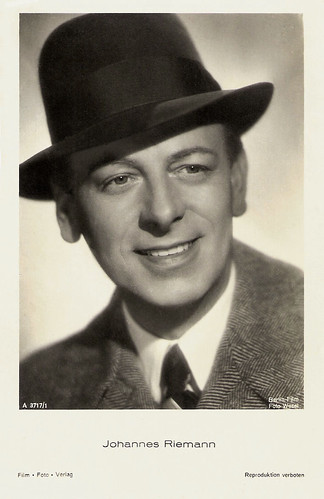 Crook in Tails
Neither the advent of the sound film nor the Nazi's ascension to power did pose a problem to Johannes Riemann's career. In the early sound period he had success with romantic comedies like Der falsche Ehemann/The Wrong Husband (1931, Johannes Guter) and Die Liebensfiliale/The Love Branch (1931, Carl Heinz Wolff). His first film directions were the musical romances Liebe auf Befehl/Love on Command (1931, Ernst L. Frank, Johannes Riemann) and Ich sehne mich nach/I'm Longing for You (1934) with Camilla Horn. In the following years he directed and wrote screenplays for more light entertainment films like Ich heirate meine Frau/I Marry My Wife (1934) starring Lil Dagover, Ave Maria (1936) - the second film-starring vehicle for legendary operatic tenor Beniamino Gigli, and Gauner im Frack/Crook in Tails (1937). Meanwhile he appeared as an actor in films like Der Mann mit der Pranke/The Man with the Paw (1935, Rudolf van der Noss) and Bel Ami (1939, Willi Forst). During the Third Reich Riemann became a NSDAP member and in 1939 Adolf Hitler appointed him to the rank of Staatsschauspieler (national actor). During the war he appeared in films like Friedemann Bach (1941, Traugott Müller, Gustaf Gründgens), Drei tolle Mädels/Three Great Girls (1942, Giuseppe Fatigati, Hubert Marischka), Alles für Gloria/Everything For Gloria (1942, Carl Boese) for which he also wrote the scenario, and Das Lied der Nachtigall/The Song of the Nightingale (1943, Theo Lingen). However, around 1943 he received less and less role offers and he returned to the theatre (a.o. for the Theater am Kurfürstendamm in Berlin). In May 1944 he even performed at a party for the staff of concentration camp Auschwitz in Poland. After the end of World War II, Riemann was not able to tie on to his earlier film success. The by then almost 70-year old actor appeared mostly on stage and only occasionally in the cinema – for instance, in Der schräge Otto/Weird Otto (1956, Géza von Cziffra) and in the Heimatfilm Zwei Bayern im Harem/Ywo Bavarians in a Harem (1957, Joe Stöckel). His last role was in the TV film Eurydice (1957, Harald Braun), an adaptation of the play by Jean Anouilh. Johannes Riemann died in 1959 in Konstanz, Germany. 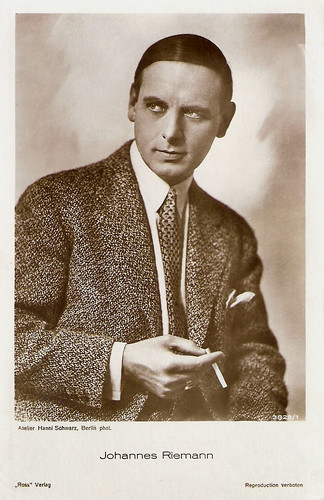 
Lycienne Delyle sings a French version of the song Bel Ami, with pictures from the Bel Ami (1938). Source: Alparfan (YouTube).