Yesterday, 28 May 2017, French actor and comedian Jean-Marc Thibault (1923-2017) passed away. Thibault and his sidekick Roger Pierre (1923-2010) were a popular French comedy duo, which gave countless performances on stage, radio and TV. They also starred in five popular films. Thibault and Pierre both also had solo careers as actors, screenwriters and directors. Thibault was 93. 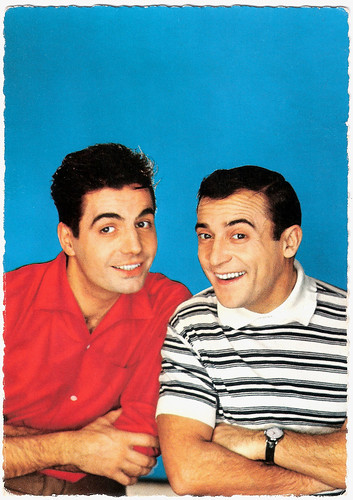 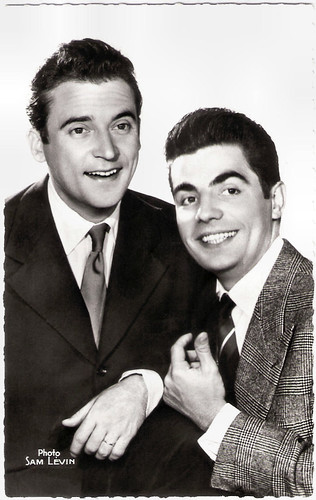 
Jean-Marc Thibault was born in Saint-Bris-le-Winey, France in 1923. His sister would later marry politician Lionel Jospin.

After following theatre classes at the course Simon, Thibault worked in dance halls and also played sketches in cabarets. His first appearance in the cinema was in in Premier de cordée/Lead climber (Louis Daquin, 1944).

Roger Pierre was born in Le-Port Marly, France 1923. In 1946 he had made his stage debut in a cabaret and was an extra in the war drama Le Père tranquille/Mr. Orchid (René Clément, 1946) starring Noël-Noël.

In 1947, Pierre worked as a presenter of commercials at Radio-Luxembourg. There he met Thibault whose texts he had to read. It was the start of a long career as a comedy duo in Parisian cabarets like le Tabou, le Caveau de la Terreur, l'Amiral, and le Moulin-Rouge. The men wrote some 3,000 sketches and songs together.

From 1972 till 1975 they made everybody in France laugh with their historical comedy shows Les maudits rois fainéants/The damned lazy kings and Les z'heureux rois z'Henri/The Happy Kings Henry. Their final films together were the comedies En grandes pompes/With great fanfare (André Teisseire, 1974) with Ginette Leclerc, and Gross Paris (Gilles Grangier, 1975). 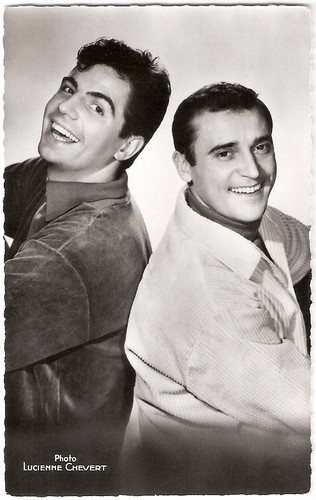 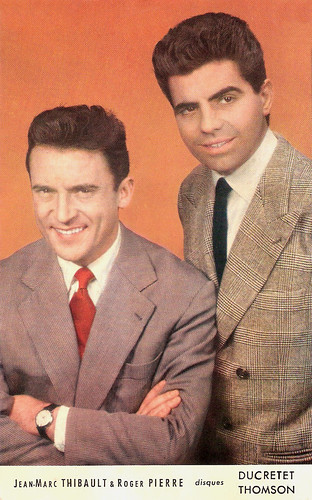 From 1985 to 1993, Thibault dedicated himself to television. He starred in the hit series Maguy, and in La Tête en l'air/The head in the air, for which the screenplay was written by his wife, Sophie Agacinski.

In 2001, Thibault returned to the cinema with two feature films: De l'amour/From love (Jean-Francois Richet, 2001) and Vidocq (Pitof, 2001). The following year, he appeared in Féroc/Fierce (Gilles de Maistre, 2002) alongside Samy Naceri. This TV film denounces the rise of the extreme right in France.

After 1976, Roger Pierre continued to work on stage and television. During the 1980s, he participated in Jeux de 20 heures. He cooperated on the cult TV show Grosses Têtes by Philippe Bouvard. He also appeared in the TV show Incroyable mais vrai! And at 80 he played in the TV film L'Ami d’enfance de Maigret/The childhood friend of Maigret (Laurent Heynemann, 2003), with Bruno Crémer as inspector Jules Maigret. He had his final film role in Les Herbes folles/Wild Grass (Alain Resnais, 2009) with Sabine Azéma.

Pierre and Thibault reunited twice. In 1984 they worked together for the spectacle Nos premiers adieux at the Théâtre Antoine in Paris. They did that again in 1990 at l'Olympia. Roger Pierre, died of cancer in 2010 at the age of 86.

Jean Marc Thibault, who died in Marseille, was 93. He was the father of Xavier and Frédéric Thibault, the leaders of the Grand Orchestre du Splendid, and of actor and director Alexander Thibault.

(Thibault's wife and Jospin's wife are sisters, in fact.)
You do a great work with this site. Bravo!