On Thursday 15 June 2017, Russian actor and director Aleksey Batalov passed away in his hometown Moscow. He played positive and noble characters in several classics of the Soviet cinema such as Bolshaya Semya/The Big Family (Iosif Kheifets, 1954), Letyat zhuravli/The Cranes Are Flying (Mikhail Kalatozov, 1957), Dama s sobachkoi/The Lady with the Dog (Iosif Kheifits, 1962), and Oscar winner Moskva slezam ne verit/Moscow Does Not Believe in Tears (Vladimir Menshov, 1979). He was named a People's Artist of the USSR in 1976 and a Hero of Socialist Labour in 1989. 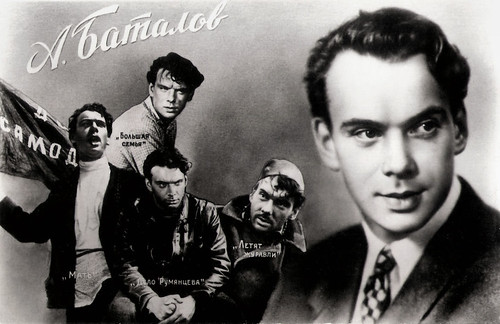 Aleksey (or Aleksei) Vladimirovich Batalov was born in 1928, into a family associated with the theatre. He was born in the city of Vladimir, near Moscow, where his grandmother was the Doctor General at the Vladimir city hospital.

His father, Vladimir Petrovich Batalov and his mother, Nina Antonovna Olshevskaya, were both actors of the Moscow Art Theatre (MKhAT) under the directorship of Konstantin Stanislavski and Vladimir Nemirovich-Danchenko. His uncle, Nikolai Batalov, was a distinguished film actor, who had starred in Vsevolod Pudovkin's classic Mat/Mother (1926).

The Batalov family lived in the actor's apartments building at the Moscow Art Theatre. Aleksey then moved with his mother to the home of her second husband writer Viktor Ardov, who was the neighbour of Russian poet and essayist Osip Mandelstam. Young Batalov became a good friend of Modernist poet Anna Akhmatova who stayed in his room during her many visits to Moscow. Later, in the 1960s, Aleksei Batalov painted an oil portrait of Anna Akhmatova. Writers Mikhail A. Bulgakov, Mikhail Zoschenko, Boris Pasternak were among the closest friends of the Batalov family, being also the colleagues of his stepfather Viktor Ardov.

In 1944, upon his return from evacuation in Tatarstan, Aleksey Batalov made his film debut with a bit part in Zoya (Lev Arnshtam, 1944). He studied acting at the Moscow Art Theatre's Acting Studio-School of Vladimir Nemirovich-Danchenko and graduated in 1950. That same year he was drafted in the Red Army and worked as an actor with the Central Theatre of the Soviet Army from 1950-1953. Batalov joined the Moscow Art Theatre in 1953 but left three years later to concentrate on his career in film.

Batalov shot to fame with his role in the film Bolshaya Semya/The Big Family (Iosif Kheifets, 1954). For that role he won the Best Actor award at the Cannes Film Festival, which he shared with his partners Sergei Lukyanov, Boris Andreyev, Nikolai Gritsenko, Pavel Kadochnikov, and others; the whole ensemble of actors and actresses were awarded for that film at Cannes, in 1955. 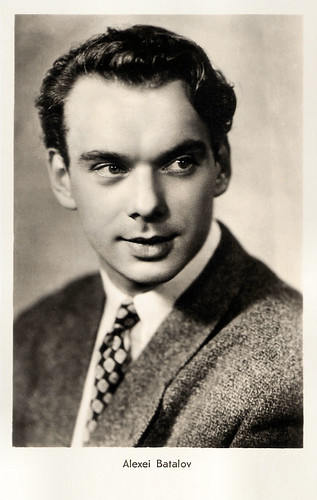 Moscow Does Not Believe in Tears

Aleksey Batalov received more international acclaim for his memorable acting opposite Tatyana Samoylova in Letyat zhuravli/The Cranes Are Flying (1957) for which director Mikhail Kalatozov won the Golden Palm at Cannes, in 1958. Batalov won the Jussi Diploma of Merit for the supporting role in Dama s sobachkoi/The Lady with the Dog (Iosif Kheifits, 1962), based on a story by Anton Chekhov.

Batalov also worked with Iosif Kheifits in V gorode S./In the Town of S. (Iosif Kheifits, 1967), based on another story by Anton Chekhov. Batalov himself directed three films: Shinel/The Overcoat (1960) based on the story by Nikolai Gogol, Tri tolstyaka/Three Fat Men (co-directed with Iosif Shapiro, 1966) and Igrok/The Gambler (1973), an adaptation of the eponymous book by Fyodor Dostoevsky.

Aleksey Batalov earned the State Prize of the USSR for a strong and difficult leading role opposite Innokentiy Smoktunovskiy in 9 dney odnogo goda/Nine Days in One Year (1961), for which director Mikhail Romm won the Crystal Globe. Batalov's performance in the leading role of a Russian intellectual in Beg/The Flight (Aleksandr Alov, Vladimir Naumov, 1970) based on the play by Mikhail A. Bulgakov, was somewhat overshadowed by the brilliant duo of his film partners Mikhail Ulyanov and Evgeniy Evstigneev.

In the 1970s he concentrated on his professorship at the Gerasimov Institute of Cinematography. Batalov made a successful comeback in Moskva slezam ne verit/Moscow Does Not Believe in Tears (Vladimir Menshov, 1979), which won an Oscar for the Best Foreign Language Film (1981).

After that, he effectively retired from acting and devoted his time to coaching new generations of film actors. In addition to his numerous international awards Batalov was honoured with the title of the People's Artist of the USSR (1976). He was decorated and received many Soviet and Russian awards from the state. Batalov was the Dean of the Actors Studio at the Moscow State Film Institute (VGIK) from 1975 to 2005. He taught over 20 acting seminars in the USA and Canada. He also made notable works for the Moscow Radio.

Aleksey Batalov died on 14 June 2017 in Moscow from complications of a fall, which resulted in a broken neck and hip, at the age of 88. He was married to Gitana Leontyenko and they had one child.